A gunman opened fire in a San Diego-area synagogue with an assault-style weapon on Saturday, killing one woman inside and wounding three other worshippers in a hate crime carried out on the last day of Passover, authorities said.

The suspect, a 19-year-old white male whose identity was not immediately made public, fled the scene by car and was arrested a short time later when he pulled over and surrendered to police, authorities said at a news conference.

The gun violence at the Congregation Chabad synagogue in the town of Poway, Calif., about 37 kilometres north of downtown San Diego, unfolded six months to the day after 11 worshippers were killed and six others were wounded by a gunman who stormed a synagogue in Pittsburgh yelling, “All Jews must die.” The assailant in that incident was arrested.

Poway Mayor Steve Vaus, speaking from a police command center, characterized Saturday’s shooting as a “hate crime,” saying his assessment was based on statements uttered by the gunman when he entered the synagogue.

Speaking with reporters at the White House, U.S. President Donald Trump said, “My deepest sympathies go to the people that were affected.” He added that “it looks like a hate crime” and that authorities will “get to the bottom of it.”

San Diego County Sheriff Bill Gore told reporters that four people were struck by gunfire and taken to Palomar Medical Center, where one of the victims, an “older woman,” died. The three other patients — “two adult males” and a “female juvenile” —  were listed in stable condition, Gore said.

‘You can’t break us’

The bloodshed unfolded shortly before 11:30 a.m. local time in Poway, a suburb of about 50,000 residents, when the suspect walked into the synagogue and started shooting, Gore said.

Local television channel KGTV 10News said the synagogue was hosting a holiday celebration beginning at 11 a.m. and due to culminate in a final Passover meal at 7 p.m. Authorities said about 100 people were inside the temple at the time. 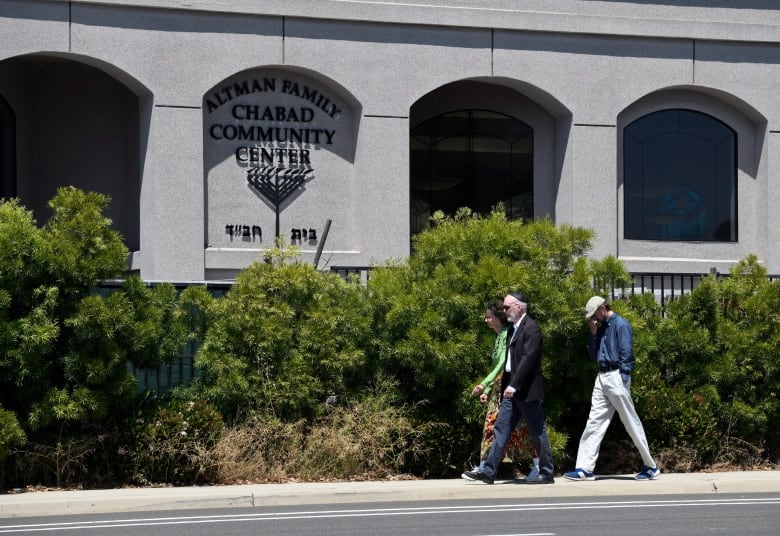 Synagogue members walk outside of the Chabad of Poway Synagogue on April 27, 2019, in Poway, Calif. One woman is dead and three other worshipers were injured after a shooting at the synagogue on Saturday. (Denis Poroy/Associated Press)

San Diego television station KGTV reported a woman whose husband was still inside the synagogue as saying the victims included the rabbi.

Minoo Anvari, an Iranian refugee whose husband was attending services inside when gunshots rang out, told KUSI-TV the wounded included a female friend and the rabbi, who was shot in the hand.

A man who lives nearby, Christopher Folts, said on CNN he heard six to seven gunshots, then a man yelling, followed by six to seven more shots.

Cantor Caitlin Bromberg of Ner Tamid Synagogue, down the street from the shooting scene, said her congregation learned of the shooting at the end of their Passover services and that they were heading to Chabad of Poway to show support and help.

“We are horrified and upset, and we want them to know we are thinking of them,” Bromberg told The Los Angeles Times, adding that she has not heard from Chabad of Poway leadership because they would not normally use the phone during the Sabbath.

“They would only do that on emergency basis, if they do it at all,” Bromberg told the newspaper.