This summer, 15-year-old Renay Willier will compete to win national softball championships in two countries, facing off against players up to four years older than herself.

The West Kelowna teen plays shortstop for the Vancouver (Washington) Patriots in the U18A division as well as for the TriCity Titans in U19A softball here in British Columbia.

It’s her second year travelling to the U.S. to play softball, where Willier says competition is more fierce on the diamond.

“People take it more seriously when they go practice and go play games, so usually there are better players and more committed players,” said Renay who was elected to captain her team in Vancouver, Wash., this summer.

“It makes me think that no matter where you come from, you could fit right in and people accept you.”

On Tuesday, Renay will be one of 12 B.C. athletes to receive the Premier’s Award for Indigenous Youth Excellence in Sport at an awards ceremony in Port Alberni, which honours youths’ excellence in sport, leadership qualities, commitment to their education and roles in their communities both on and off the sports field.

Her photo and bio will also go into the B.C. Sports Hall of Fame this year. 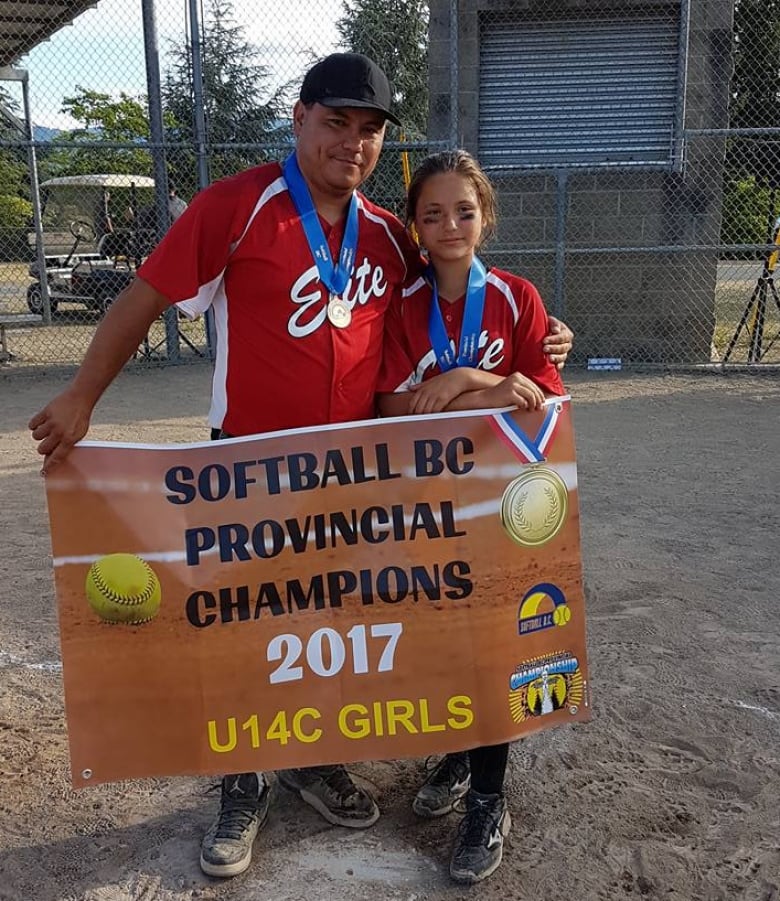 Renay Willier and her father, Kevin, logged 10s of thousands of kilometres in their car last summer travelling to softball tournaments across the Pacific Northwest (Kevin Willier)

Renay is originally from the Sucker Creek First Nation in Alberta.

Her father, Kevin, was left to raise Renay and her sister on his own, when their mother passed away when Renay was only two years old.

Kevin soon found healing by playing softball and discovered the community nature of the sport was good for his daughters as well, he said.

“They grew up around the ball field,” said Kevin.

The family eventually moved to West Kelowna, and Renay started to play softball in the Central Okanagan.

But last summer she sought to play against higher levels of competition in the U.S., and Renay and her father logged 10s of thousands of kilometres in their car travelling to tournaments in cities as far as San Diego.

Renay’s play has already caught the attention of some U.S. college recruiters. It’s the kind of attention she enjoys as she hopes to play Division 1 college softball.

“I like knowing that I have a way to get to college with something I love doing.”