Rains from Cyclone Kenneth, the second tropical storm to hit Mozambique within weeks, continued to pound the northeastern city of Pemba and surrounding areas causing massive flooding and destruction.

One death has been confirmed so far and 160,000 people are at risk, with more torrential rain forecast in the coming days.

The government described the situation as “critical” in other centres of Cabo Delgado province which are unreachable by road. In a statement Sunday night, the government said the death toll could rise due to “worrying” rains.

The towns of Ibo, Macomia and Quissanga have been badly flooded and many buildings and homes destroyed. Most roads are impassable from the flooding and the heavy rains have made air contact difficult.

Officials said that as soon as the rains lift, aid distribution could begin Monday via helicopter and boats in Ibo and Quissanga. Canoes may be used to deliver aid in Macomia. 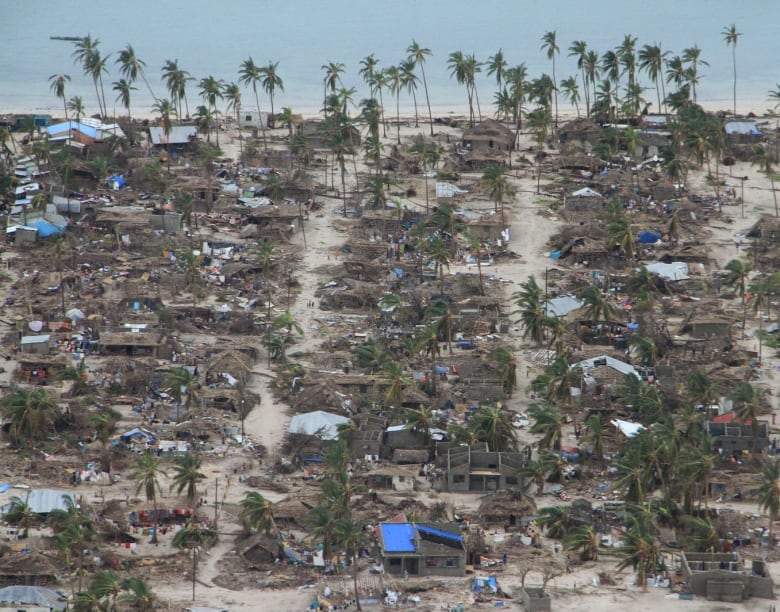 This photo, provided by the UN Office for the Coordination of Human Affairs, shows the devastation in Macomia District, Cabo Delgado province, Mozambique, on Saturday. (OCHA/Saviano Abreu/Reuters)

Safe drinking water is also becoming a challenge as wells have been contaminated, raising the threat of cholera. Malaria is another concern.

As the rains eased in Pemba, the provincial capital and an historic port city, some tried to return to a semblance of daily life amid the destruction.

At a school in one suburb, school children in blue uniforms trooped into classes. In central Pemba, traders put their wares on street pavements and wooden tables while others were busy removing rubble from their homes and yards.