An Edmonton teen has been given a 20-month sentence for a September 2017 frenzied knife attack on a city bus driver.

The 15-year old couldn’t bear to look at the video screen in youth court Friday afternoon.

The teen, who cannot be identified under the Youth Criminal Justice Act, hung his head and groaned as driver Mike Kostelny was stabbed over and over again on the screen.

It was an aggravated assault youth court judge Aran Veylan described as “a despicable act.”

Veylan agreed to a joint submission made by the Crown and defence. He sentenced the teen to 20-months. With credit for time already served since the night of the attack, the teen will spend another 187 days in closed custody, to be followed by 200 days to be served with supervision in the community.

The teen pleaded guilty in January to aggravated assault, carrying a concealed weapon, assault with a weapon and breach of conditions. At that time, the judge ordered a presentence report, a psychiatric and risk assessment along with a Gladue report to examine the effects of his Indigenous heritage.

‘He has not had the best role models’

The reports prepared for the sentencing judge detailed a troubled past. Defence lawyer Karen McGowan said the teen has an IQ in the low 60’s.

“He does act very much like a child, however, he committed an act that was very violent and he has accepted responsibility for that,” McGowan said.

“Despite the best efforts of his guardians, they have not been able to provide the young person with the assistance he needs. He has not had the best role models.”

The judge noted the psychiatric assessment revealed the teen was exposed to domestic violence at a very early age and that he suffered emotional and mental abuse by family members. The youth denied he has substance abuse issues, but admitted he tried marijuana for the first time when he was seven and used meth when he was 13.

The teen’s lawyer said he’s been admitted a number of times to Alberta Hospital, sometimes under the Mental Health Act, suffering from a drug-induced psychosis.

“He had some very paranoid and strange ideas,” McGowan said. “Often he has suspicions that people were going to sexually assault him.”

The 34-page psychiatric report and risk assessment rated the teen’s risk for future violence as high. It also noted his behaviour has generally been worsening while in custody.

“Basically he’s likely to react in anger and impulsively engage in reactive violence,” the judge said. “It’s part of his psychological makeup. His substance abuse issues only exacerbate that tendency.”

The boy’s mother was sobbing in the courtroom as he repeated his guilty pleas at the start of the hearing. She begged him not to plead guilty again and argued with the judge about the contents of the sentencing reports.

Before he was sentenced, the woman announced she couldn’t bear to sit in court any longer and was led away by sheriffs telling her son, “I love you.”

The 65-year old bus driver who was attacked last September was also in court Friday afternoon to deliver his victim impact statement. 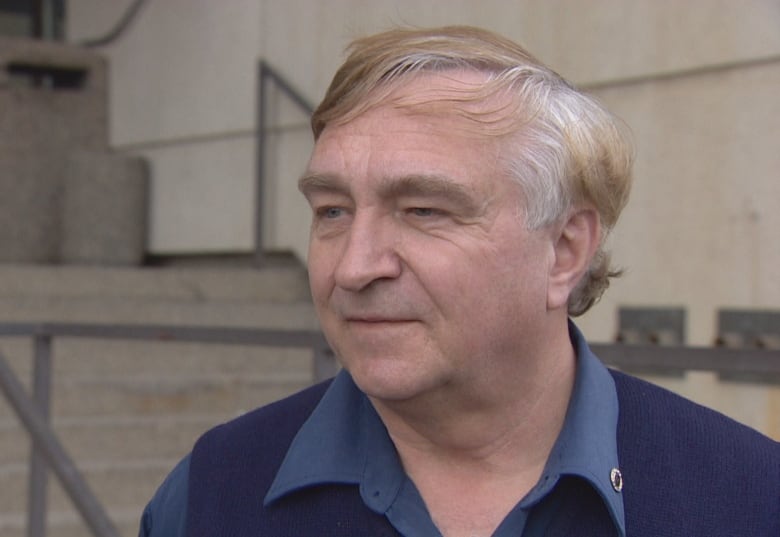 Mike Kostelny, 65, speaks to reporters outside the Edmonton courthouse after his attacker is sentenced. (Trevor Wilson/CBC)

Mike Kostelny said he has lost more than $13,000 in lost wages and holiday pay. He still suffers from the physical and psychological aftermath of the aggravated assault.

But outside court, Kostelny said he nonetheless feels no animosity towards his attacker.

“You have to realize the nature of the sickness and the mental health issue, which the youth has obviously had for some time now,” Kostelny said. “And I actually feel good that it appears he’s going to perhaps receive the help he’s so badly needed for so long.”

Kostelny returned to work on April 15 and coincidentally was assigned to drive the very same bus he had been assaulted in. The night of the attack, he had trouble getting his seatbelt undone. Kostelny admitted that on his first shift back, he was unable to use his seatbelt.

“I couldn’t put it on,” Kostelny said. “It felt like I was being strangled.”

Before he was sentenced, the teen apologized to Kostelny in court.

“I want to say I’m truly sorry for what I did,” the teen said. “I feel a bit shameful for it.”

The lawyers and the judge agreed the sentence handed to the teen balanced the aims of rehabilitation and protection of the public.

“It’s a tragic case. A difficult case,” Judge Veylan said. “There is more than one victim in the room.”

He called the attack on Kostelny, “a despicable act, a very dangerous and violent attack.”

Veylan told the teen he was lucky that his victim survived.

“I thank God that I am alive. It’s a second chance,” Kostelny said outside court. “The Edmonton police who watched the video said I shouldn’t be alive. They said you had to have more than one angel.

“That’s my belief as well.”