A Canadian hockey ref’s unusual fundraiser for Alzheimer’s research has caught the attention of his musical heroes.

Steve McNeil is from Toronto but has been travelling across the country to skate for 19 hours and 26 minutes in each of Canada’s NHL cities, raising awareness and money for local Alzheimer’s societies.

His effort is a tribute to his mother, who had the neurological disease, and to Malcolm Young, who co-founded the iconic Australian rock band AC/DC and died from dementia in 2017 at age 64.

The band’s accountant, Vicky Granados of the accounting firm Prager Metis, says Young and his wife, Ella, “stumbled across” an article about McNeil’s 19-hour skates and asked her to write CBC for more details about supporting his fundraiser.

“It’s funny how things work in the world, but rock-and-roll is such a powerful tool,” McNeil said when he heard the good news. “This is AC/DC. This could open so many doors.”

Malcolm Young played rhythm guitar, sang backing vocals and co-wrote many of the songs before his untimely death. His brother and wife have also had other family members and friends who suffered from Alzheimer’s. 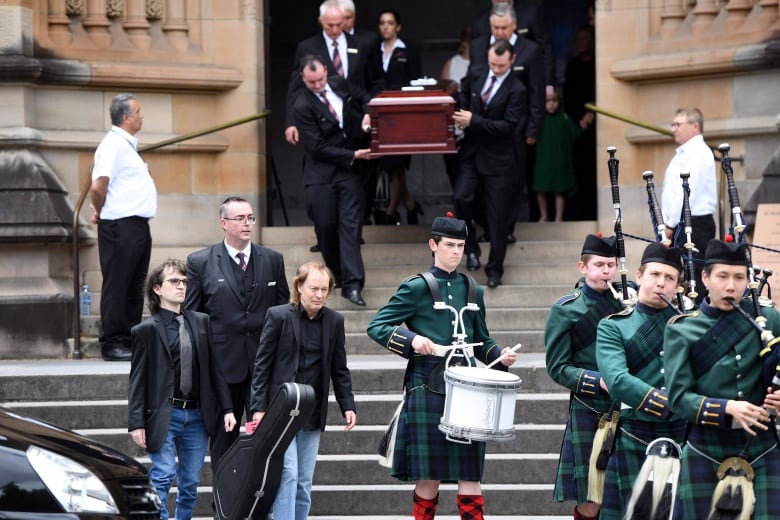 Angus Young, front centre, carries a guitar as he leads the casket of his brother Malcolm Young at his funeral in 2017. (Dean Lewins/AAP via The Associated Press)

Since learning of the promised donation, McNeil has asked Angus Young to donate to the Alzheimer Society of Canada — specifically its music programs for patients. He didn’t know how much the donation would be.

McNeil says he’s had Malcolm Young top of mind throughout his marathon skates. When he gets cold in the brutal Canadian nights, he cranks AC/DC and imagines his mother’s good cooking to stay warm.

“It’s like touching an emotional lottery. You’ve got to understand, this is what’s been my driving force,” said McNeil.

“When I go out in these conditions, that’s all I listen to because it’s my tribute to Angus and the boys — because I know they lost a big part of their family.”

At the Calgary skate on Saturday, another AC/DC band member reached out to McNeil. Drummer Chris Slade has a son who lives in the Alberta city and saw the story.

The son brought his family to the rink and they video-chatted Slade.

“I was a little giddy, I’ll admit that,” McNeil said. 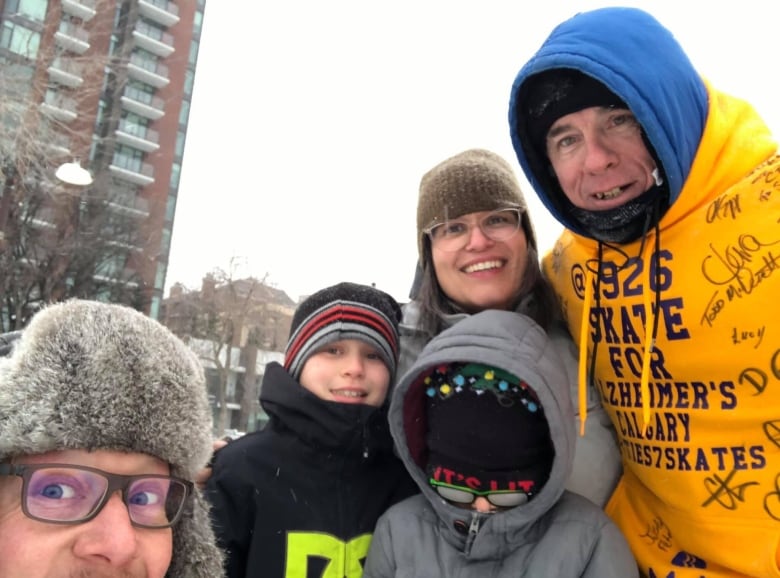 Steve McNeil met the son of AC/DC drummer Chris Slade at his skate in Calgary on Saturday. (Steve McNeil)

They talked about Malcolm Young and McNeil’s mother, who lived with Alzheimer’s for nearly 20 years. McNeil named his challenge #1926Skate after the year of her birth.

The length of his events also pays tribute to the long days that caregivers spend on dementia patients, he says. McNeil cared for his mother before she went into a nursing home.

​McNeil heads to Winnipeg next, hoping to wrap up his NHL city tour at the Forks on Wednesday afternoon.

“Life’s too short to take anything for granted. I wear those AC/DC pants, I wear them proudly,” McNeil said.

“Tomorrow I’m going to step on the ice, and I’m going to begin accomplishing the seventh of seven cities outdoors in Canada in February.

More than half a million Canadians are living with dementia, according to the Alzheimer Society of Canada. That figure is expected to nearly double in 15 years.