A prominent activist from Kazakhstan who is campaigning for the release of ethnic Kazakhs in China says he was forced to sign blank documents while under house arrest.

Serikzhan Bilash, a naturalized Kazakh citizen born in the region of Xinjiang, is the leader and public face of Atajurt, a group that has worked for the release of ethnic Kazakhs from “re-education” camps where activists say more than one million ethnic Uighurs and other Muslims are held.

Atajurt said security forces had broken into Bilash’s hotel room in Almaty in the early hours of Sunday, detained him and quickly flown him to Astana, the capital of the former Soviet republic.

Bilash has been accused of “inciting ethnic hatred” and placed under house arrest, although against him have not been officially announced.

In an audio message relayed by his lawyer, Aiman Umarova, Bilash said unknown officials visited his place late on Wednesday and pressured him into signing blank documents.

“They told me that if you want a lenient verdict, we can help you,” Bilash said in the recording. “I had to sign several documents they wanted me to, some of them were blank.”

Bilash did not specify what exactly he was forced to sign but said he signed an application to take a state-appointed attorney to replace Umanova.

Umanova told The Associated Press on Thursday she is expected to be granted a visit with Bilash next week. 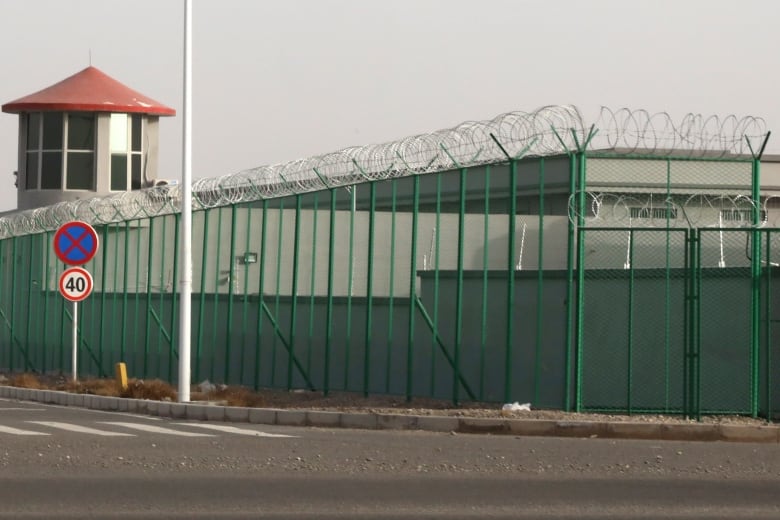 A guard tower and barbed wire fences surround an internment facility in the Kunshan Industrial Park in Artux in western China’s Xinjiang region. A U.S. envoy on religion has described China’s internment of an estimated one million Muslims as a ‘horrific’ situation. (Ng Han Guan/The Associated Press)

A leading voice campaigning for ethnics Kazakhs in China, Bilash has tried to steer clear of any public protests that could be construed as criticism of the Kazakh government, focusing instead on helping the Kazakhs trapped in the Chinese internment camps.

But the activist has come under pressure from authorities in recent months.

A court last month found Bilash guilty of illegally leading an unregistered organization and fined him the equivalent of $666 US. Shortly before being placed under house arrest, he reported being followed by unknown men.

In Beijing earlier this week, Chinese Foreign Ministry spokesman Lu Kang said he had noted the reports about Bilash, and said he had illegally entered Kazakhstan in 2018.

“According to what is understood he may have some debt problems in China,” Lu said.

“This kind of person has ulterior motives to make things up. I think the aims behind this need no explanation,” he added, without elaborating.

Bilash and his group’s vigorous campaign to shed the light on the plight of ethnic minorities in China have been “a thorn in the side of Kazakhstan’s government since it began operating,” said Sean Roberts, director of the International Development Studies Program at the George Washington University.

Most of Atajurt’s members are ethnic Kazakhs from China who were encouraged to repatriate to Kazakhstan decades ago by President Nursultan Nazarbayev’s government.

Official pressure on Bilash and his group could backfire at a time when the nation faces economic problems.

“This is all the more politically dangerous at a time when domestic dissatisfaction about economic progress and social services in Kazakhstan is on the rise and there is on-going discussion in the country about presidential succession as Nazarbayev ages,” Roberts said.

Kazakhstan has accommodated Beijing on sensitive ethnic issues in the past when it extradited ethnic Uighurs to China, but going after ethnic Kazakhs under pressure from China could potentially put the government in a fraught position.

“For many ethnic Kazakh nationalists, suppressing the voices of Kazakhs at the bequest of the Chinese could be portrayed as tantamount to treason,” Roberts said.