An Air Canada flight from Toronto to Delhi turned back over Europe today when the Pakistani government decided to close its airspace amid heightened tensions with India.

The flight left Toronto after 9:30 p.m. ET Tuesday and has been in the air for more than 12 hours. It had already crossed the Atlantic Ocean and was flying over Europe when it turned around.

Air Canada also cancelled an India-bound flight from Vancouver and has temporarily suspended service to India, a spokesperson told Reuters on Wednesday.

The closures come amidst escalating tensions between India and Pakistan. 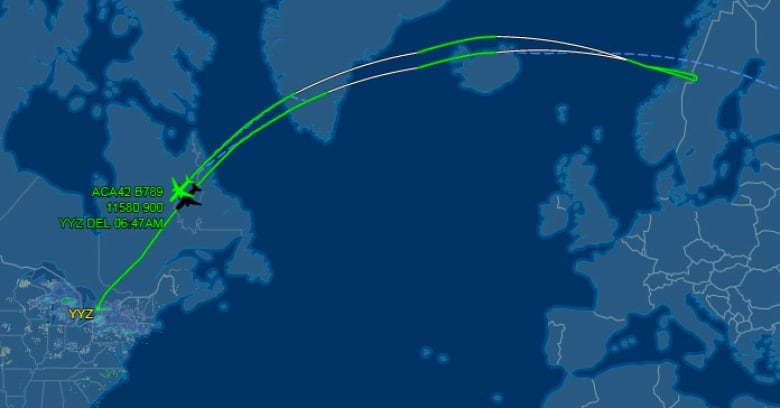 The Air Canada flight made it across the Atlantic Ocean before being turned back to Toronto on Wednesday. (Flightaware.com)

Pakistan carried out airstrikes and shot down two Indian military jets on Wednesday, a day after Indian warplanes struck inside Pakistan for the first time since a war in 1971. Leading powers have urged the nuclear armed rivals to show restraint.

Flights on several airlines are affected.