Albertans are going to the polls today to decide whether to give Rachel Notley and the NDP government a second mandate, or choose Jason Kenney and the United Conservative Party (UCP) to lead the province for the next four years.

If the UCP wins a majority today, it shows Albertans have decided to embrace the party’s economic message and ignore allegations of fraud surrounding Kenney’s successful 2017 leadership bid, and the racist and homophobic views espoused by some current and former candidates.

A UCP victory would also put an end to Alberta’s first NDP government, which in 2015 broke the Progressive Conservatives’ 44-year grip on power, and bring Kenney’s three-year push to unite Alberta conservatives under a single party to a successful conclusion.

If Notley is able to hold on to power, it will show her campaign, with its focus on Kenney’s social conservative views and investigations into the 2017 UCP leadership race, created enough doubt in voters’ minds about his suitability to govern.

The Alberta Party is looking to get leader Stephen Mandel elected to the legislature and to increase the three seats it held in the last legislature.

The UCP has consistently led the NDP in the polls throughout the campaign.

However, 223,000 of those ballots were cast by people voting outside of their electoral divisions, which means they won’t be counted until Wednesday. Some of the closer races may not be decided Tuesday.

The campaign has been bitter and divisive since it officially started on March 19.

NDP signs have been destroyed and stolen; a Red Deer resident had an anti-NDP message scratched into the side of their SUV; and angry rhetoric has filled social media feeds.

Notley is facing an uphill battle to keep her 52 seats, particularly outside her home base of Edmonton. She spent most of her campaign in Calgary, where her party won 15 of 25 seats in 2015, mostly due to split of votes between the Wildrose and Progressive Conservative parties.

Notley came to office not long after oil prices began their steep drop in 2014. The resulting recession led to large job losses, particularly in Calgary. While the economy has improved, the jobs have not come back, a point Kenney kept hammering home during the campaign.

Notley has framed the question for voters as asking who they trust to be premier — her or Kenney.

The NDP initially made Kenney‘s past activism against abortion rights and LGBTQ issues a focus of its campaign, in an effort to portray him as out of step with mainstream Alberta.

Notley shifted her campaign during the last two weeks to focus on what her party would do for Calgary. She has argued Kenney’s plan to end her oil-by-rail deal would damage the city’s economic prospects, and that his promise to cut corporate taxes would not create jobs.

She claimed Kenney’s vow to “get tough with Ottawa” is nothing more than political theatre that won’t get shovels in the ground for the Trans Mountain Pipeline Expansion. She claims that Kenney’s vow to hold the line on spending amounts to a cut in a growing province.

Kenney’s campaign has focused on jobs, the economy and pipelines. He repeatedly brings up what he calls Notley’s “failed alliance” with Prime Minister Justin Trudeau that hasn’t brought Alberta any closer to a coastal pipeline. Kenney is vowing to end the province’s carbon tax, and fight the federal plan that will be imposed in its absence in court.

The NDP decided to build infrastructure and maintain government services during the economic downturn. Kenney has made this decision, which has landed Alberta billions in debt, into a campaign issue.

Over the past 28 days, Kenney has faced a steady stream of allegations about the UCP leadership campaign in 2017.

More damaging allegations emerged last week suggesting fraudulent emails were used to cast ballots for Kenney. The matter has come to the attention of the RCMP who have interviewed at least one person whose name was attached to a fake email address. Kenney has defended the voting process used during the campaign. 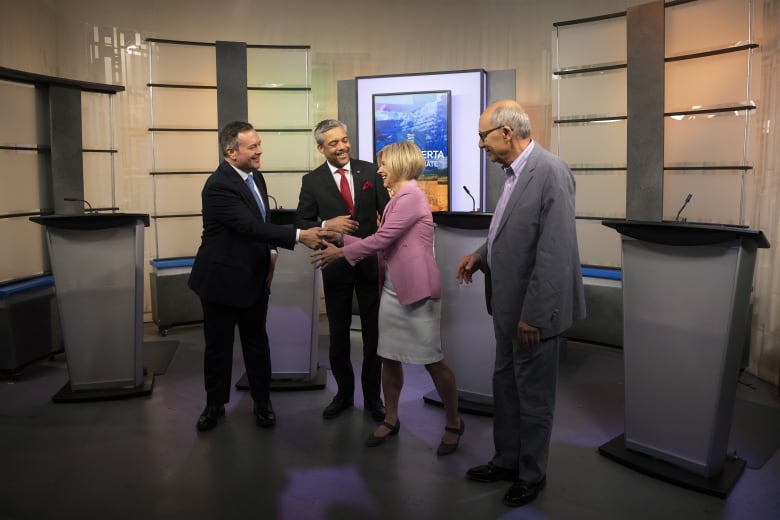 At the midpoint of the campaign, a six-year-old sermon from UCP Drayton Valley-Devon candidate Mark Smith became a huge issue for Kenney.

Smith claimed same-sex unions aren’t real love and that women who have abortions are murdering their babies.

On April 3, Kenney was called to task in a combative interview with national conservative radio host Charles Adler, particularly for his choice to let Smith stay as the candidate in the reliably conservative riding.

On Monday, Kenney claimed he did not know why a business belonging to Peter Singh, the UCP candidate in Calgary-East, was searched by RCMP on Thursday night.

During the campaign, Notley has faced questions about her decision to withhold the names of the two NDP MLAs who were investigated for sexual misconduct since 2015. Notley claims releasing their names would identify the complainants. It is not known if the two caucus members in question are running in this election.