Britain’s Parliament was due to vote on Thursday on whether to delay Brexit beyond March 29 and Prime Minister Theresa May prepared to push lawmakers to vote again before then on her EU divorce deal, which they have twice rejected.

Key to May’s plan will be an attempt to persuade the most pro-Brexit lawmakers to reverse their opposition to her deal in the face of a possibly long delay that could mean Britain ends up with a closer relationship with the EU than May’s plan foresees or that Brexit is overturned in a second referendum.

Arlene Foster, leader of the Northern Irish Democratic Unionist Party (DUP) that props up May’s minority government in Parliament but which has so far voted against May’s agreement, said it was working with the government to try to find a way of leaving the EU with a deal.

On Wednesday, Parliament rejected the prospect of leaving the European Union without a deal, paving the way for Thursday’s vote that could delay Brexit until at least the end of June.

Sterling surged as investors saw less chance of Britain leaving the EU without a transition deal to smooth its exit.

‘Not in our control’

British finance minister Philip Hammond said Brussels might insist on a long delay to Brexit if the U.K. government requests an extension to the process.

“This is not in our control and the European Union is signalling that only if we have a deal is it likely to be willing to grant a short technical extension to get the legislation through,” Hammond told Sky News.

“If we don’t have a deal, and if we’re still discussing among ourselves what is the right way to go forward, then it’s quite possible that the EU may insist on a significantly longer period,” he said.

May said on Wednesday lawmakers would need to agree a way forward before an extension could be obtained. All 27 other EU member states must agree to any extension.

She said her preference was for a short delay, meaning the government could try to pass the deal she negotiated with the EU by the middle of next week, even though it was rejected heavily by lawmakers in January and again on Tuesday.

Andrew Bridgen, a eurosceptic lawmaker from May’s Conservative Party accused her of pursuing a “scorched earth” policy of destroying all other Brexit options to leave lawmakers with a choice between her deal and a delay of a year or more.

A senior official in Britain’s opposition Labour Party said it would support a limited extension to the Brexit date beyond March 29 in order to seek a compromise that can be backed by lawmakers. 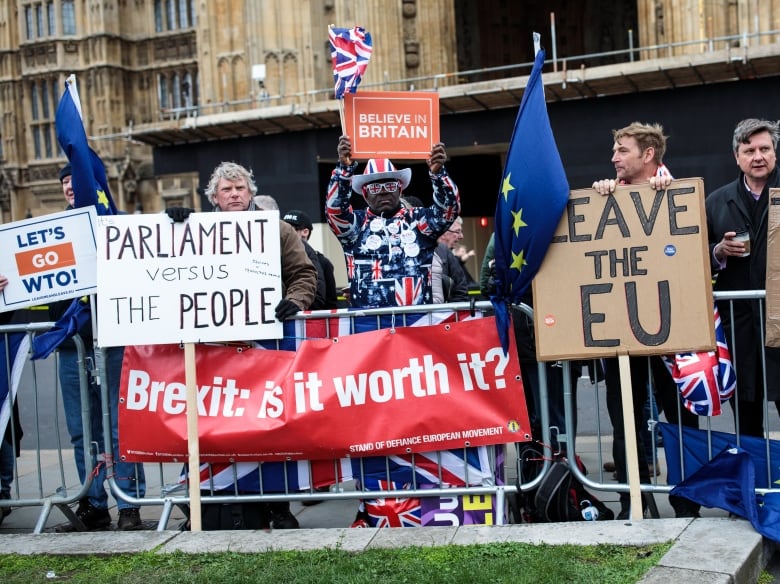 Pro-Brexit protesters demonstrate outside the Houses of Parliament on Wednesday. (Jack Taylor/Getty Images)

“We will be putting an amendment down to ensure Parliament considers an extension, it doesn’t necessarily have to be a long extension,” Labour’s finance spokesman John McDonnell told Sky News. “We will go for a limited extension today.”

Lawmakers filed amendments to the government’s motion on delaying Brexit that is due to be put to a vote later on Thursday.