Brad Marchand had two goals and an assist as the Boston Bruins defeated the Toronto Maple Leafs 4-2 on Sunday to even their Eastern Conference quarterfinal at three games apiece.

Torey Krug and Jake DeBrusk also scored for Boston, which got 22 saves from Tuukka Rask in staving off elimination.

David Pastrnak added two assists for the Bruins, who will host Game 7 on Tuesday night.

“It is what is now,” said Leafs forward John Tavares. “We’ve still got a good chance to win this series. That’s what our focus is on now. It’s over with now. Obviously we’d love to get it done today. It’s not the case.”

Morgan Rielly and Auston Matthews replied for Toronto in Game 6 of a series where neither team has managed back-to-back victories and the visitors have won four of the six contests.

Frederik Andersen stopped 37 shots for the Leafs, who lost to the Bruins in seven games in both 2013 and last spring, and have not advanced to the second round of the playoffs since 2004.

“I thought we were really ready, but as soon as we had a little adversity and they scored twice we didn’t recover,” said Babcock.

“In the end I thought this was [Boston’s] best game,” said Leafs coach Mike Babcock.

The winner of the series will take on the Columbus Blue Jackets after the conference’s eighth seed swept the Tampa Bay Lightning, who tied an NHL record with 62 victories in the regular season.

Toronto, which took a 3-2 lead in the series thanks to a patient, stifling defensive performance Friday at TD Garden, is Canada’s last hope of ending the country’s 26-year Stanley Cup drought. The Calgary Flames and Winnipeg Jets were eliminated from post-season contention earlier in the week.

Sunday’s 3 p.m. ET puck drop was something different for the Leafs, who had just one afternoon affair on the 2018-19 schedule. The Bruins, meanwhile, took part in 12 afternoon games in 2018-19.

Down by two through 40 minutes, Matthews scored his fifth goal in the last four games when he took a pass from Jake Gardiner and rifled a shot far side on Rask at 4:15 inside an electric Scotiabank Arena.

Matthews was held without a point in the first two games of the series, and had just two points in Toronto’s seven-game loss to Boston last spring.

Kasperi Kapanen cut in off the rush seven minutes into the third, but Rask closed the door on the Leafs’ speedy winger.

Tempers then flared midway through the period when DeBrusk and Rielly crashed into the end boards, with the Toronto defenceman giving the Boston forward an extra cross-check. 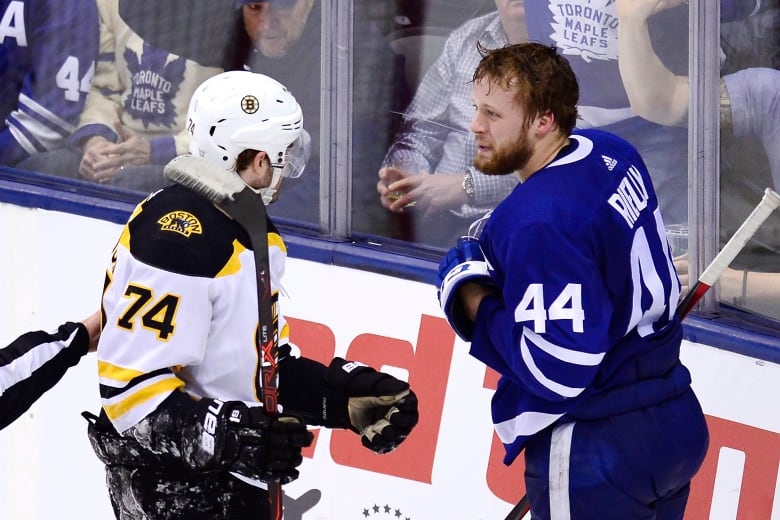 Andersen followed that up shortly thereafter by robbing DeBrusk with his glove off the rush.

Rielly then set up Matthews on another terrific chance only to see the pass hop of the star centre’s stick as Toronto turned up the pressure.

Andersen bailed out Rielly after a brutal turnover with under four minutes to go, robbing Pastrnak of a chance that would have sealed it, but Marchand scored into an empty net with 1:54 left to force Game 7.

“We had a good attitude going into the third and started executing a little better and started getting some more pucks towards the net,” said Tavares. “We’ve just got to continue to be patient. We got within one, unfortunately we couldn’t find a third.”

The veteran, battle-tested Bruins led 2-1 after the first period and had the Leafs on their heels early in the second, holding a 21-7 edge in overall shots through seven minutes.

Andersen was solid, but could do nothing on Boston’s slick goal that made it 3-1. DeBrusk left the puck for David Krejci on a 2-on-2 rush before getting inside position on Leafs winger Andreas Johnsson and making a diving stab at the return feed at 7:57.

The goal was the first of the playoffs for DeBrusk, who had six goals last spring — with five coming against Toronto, including two in Game 7.

The Leafs started to push back with a couple of chances for John Tavares, but couldn’t find a way past Rask.

“The bottom line is we weren’t as good as we could have been for a stretch of 30 minutes and they skated way better than we did,” said Babcock.

The crowd of 19,683 was left fuming later in the period when a flying elbow from Boston captain Zdeno Chara on Toronto counterpart Jake Muzzin went uncalled.

The Leafs opened the scoring at 9:42 of the opening period on Rielly’s first of the playoffs. Having hit the post on an early power play, the defenceman took a pass from William Nylander and blasted a one-timer shortside along the ice after the Bruins failed to clear the defensive zone.

Toronto forward Connor Brown and Boston defenceman Matt Gzelcyk were battling in front on the play. It looked like the Bruins were thinking about challenging, but head coach Bruce Cassidy declined to ask for a video review.

Boston tied it on a man advantage 1:41 later when Marchand snapped his third goal of the series on a shot off a scrambled draw that hit Leafs defenceman Ron Hainsey and beat Andersen between the legs.

The Bruins’ power play, which was held in check in Game 5, but was still 5 for 14 coming into Sunday, struck again with 2:58 left in the period. Krug collected a Pastrnak rebound and ripped a shot upstairs on Andersen for his first of the post-season.

Andersen did well to keep it a one-goal deficit late in the first period by making two hockey-card calibre stops on both Patrice Bergeron and Grzelcyk.