Derick Lwugi, a pillar of Calgary’s Kenyan community, was one of 18 Canadian victims of the Ethiopian Airlines crash Sunday.

Flight ET302 crashed six minutes after takeoff from Addis Ababa around 8:45 a.m. local time, killing all 157 people on board. The Boeing 737 Max 8 was destined for Nairobi.

Lwugi, 54, an accountant for the city and founder of the Kenyan Community in Calgary group, was on the flight, a family friend confirmed to CBC News.

He volunteered as an assistant pastor and sat on the board of the non-profit Abeingo Association Canada.

Lwugi leaves behind his wife Gladys Kivia, a domestic violence counsellor with the Calgary Women’s Emergency Shelter, and three children, ages 17, 19 and 20.

‘Something has gone terribly wrong’

“I didn’t anticipate this. I could not even imagine,” Kivia told CBC News. “Life happens really so quickly.”

He was on his way to Kenya to visit his parents, a trip he tried to make every two years.

Kivia said she received a call from a family member in Kenya at 3:30 a.m., telling her there had been a crash and asking what flight her husband had been on.

“Something tells me something has gone terribly wrong.” 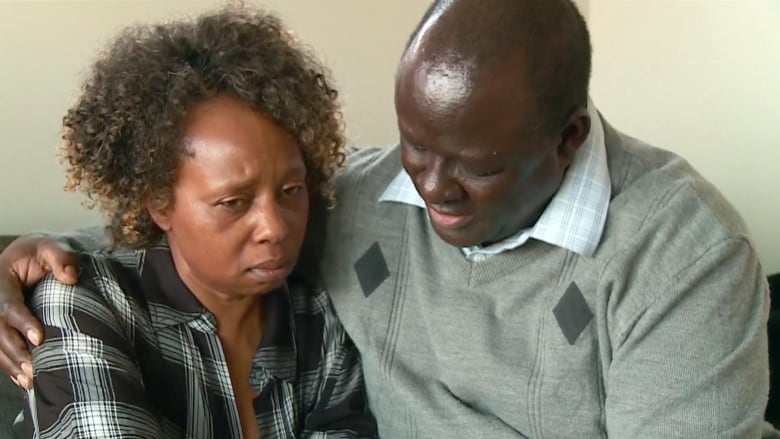 Gladys Kivia, left, is comforted by a member of Calgary’s Kenyan community after learning her husband Derick Lwugi was killed in an Ethiopian Airlines plane crash on Sunday. (Terri Trembath/CBC)

She woke up her oldest daughter in a panic, and turned on the news, where they saw reports that there had been no survivors.

Prince Kivia, 19, said he was initially hoping his dad had missed the flight because he had a habit of running late. He said his dad was his role model.

“He’s probably the strongest man that I’ve ever met in my entire life,” said Prince.

Calgary Mayor Naheed Nenshi tweeted that he was “crushed” to hear of his colleague’s death.

Absolutely crushed to learn that one of my <a href=”https://twitter.com/cityofcalgary?ref_src=twsrc%5Etfw”>@cityofcalgary</a> colleagues, wonderful community leader Derick Lwugi, was amongst those killed in the plane crash this morning in Ethiopia. All our love to his family, friends, colleagues, and all those touched by his life of service.

Members of Calgary’s Kenyan community rallied around Lwugi’s family at their home on Sunday.

Carleton University professor Pius Adesanmi and a mother-daughter pair from Edmonton, Amina Ibrahim Odowa, 33, and her daughter Sofia Abdulkadir, 5, and Winnipeg activist Danielle Moore are among the Canadian victims.

It’s not yet known what caused the plane to crash. The pilot, who had more than 2,000 hours of flight time according to the airline, sent out a distress call and was given clearance to return to the airport. Weather forecasts showed clear skies at the time of the crash. 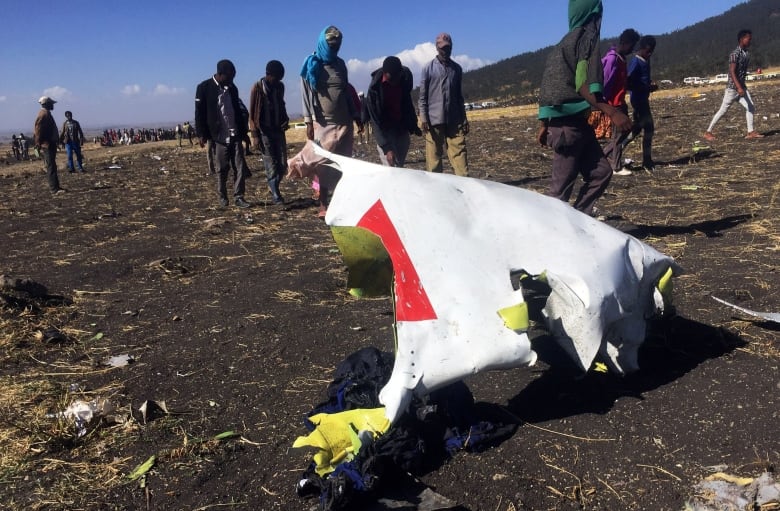 People walk past a part of the wreckage at the scene of the Ethiopian Airlines Flight ET302 plane crash, near the town of Bishoftu, southeast of Addis Ababa, Ethiopia, on Sunday. (Tiksa Negeri/Reuters )

It was the second fatal crash in five months involving the new Boeing model, after a Lion Air flight crashed into the Java Sea in October, killing 189 people.

In Canada, the planes are used by WestJet, Air Canada and Sunwing.

WestJet said in an emailed statement that it remains confident in its 13 MAX 8 aircraft, and that the airline currently operates around 450 safe 737 departures each day.

“We extend our heartfelt sympathies to the families and loved ones of the passengers and crew on board and stand ready to support the Ethiopian Airlines team,” Boeing said in a statement.

The company said a technical team was headed to the crash site to provide assistance under the direction of the Ethiopia Accident Investigation Bureau and U.S. National Transportation Safety Board.

Alberta Premier Rachel Notley expressed her condolences for the victims’ loved ones, and urged Canadians who knew travellers on the flight to contact emergency consular services.

My thoughts are with the loved ones of the 157 victims – including the 18 Canadians – who lost their lives in the Ethiopian Airlines crash this morning.<br>If you know someone who may have been on the flight, contact sos@international.gc.ca or 613-996-8885.<a href=”https://t.co/QKqP6pOABd”>https://t.co/QKqP6pOABd</a>

Prime Minister Justin Trudeau said he was “deeply saddened” by the crash.

Ethiopian Airlines said it’s working to forensically identify the victims’ identities and that once identities are confirmed, the bodies will be delivered to their loved ones.

At least 35 nationalities were among the dead, including 32 Kenyans, and people from China, the United States, Saudi Arabia, Nepal, Israel, India and Somalia.

Some of those aboard were thought to be travelling to a major United Nations environmental meeting scheduled to start Monday in Nairobi.