U.S. National Guard troops were using specialized vehicles with tank-like treads to rescue stranded drivers in Colorado in the wake of a massive late-winter storm that was expected to unleash heavy rain and snow on the Midwest plains on Thursday.

Wednesday’s blizzard caused widespread power outages, forced the cancellation of hundreds of flights and wreaked havoc on roadways as drivers became overwhelmed by blinding snow. A wind gust clocked in at 156 km/h in Colorado Springs.

The storm also contributed to the death of Cpl. Daniel Groves, a Colorado State Patrol officer who was hit and killed by a car as he helped another driver who had slid off Interstate 76 near Denver.

“It is a tragic reminder that people’s lives are at stake,” said Shoshana Lew, head of the Colorado Department of Transportation. “The best place to be is at home and off the roads.”

Lew warned drivers that conditions would remain precarious at least through Thursday.

About 200 vehicles were disabled on Interstate 25 near Colorado Springs, and many more drivers were being rescued on secondary roads, said Kyle Lester with the transportation department’s Division of Highway Maintenance. 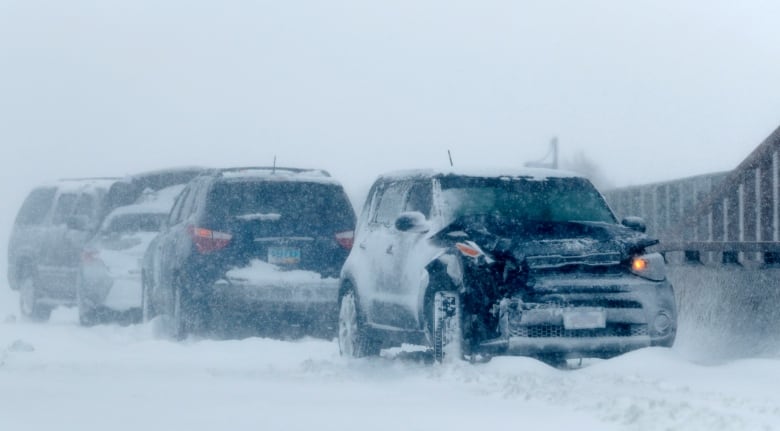 A string of wrecked vehicles sit on an overpass over Interstate 70 as a late winter storm packing hurricane-force winds and snow sweeps over the intermountain West on Wednesday in Aurora, Colo. It was just one of many major traffic issues in Colorado due to weather. (David Zalubowski/Associated Press)

One of the stranded drivers was Bria McKenzie, 22, who with her mother, brother and sister, was stuck in her car for more than two hours on a hilly road in Colorado Springs. She said the snow was so blinding and numbing, and the wind was whipping so hard, she didn’t feel safe walking to a hospital that was just down the road.

“It was just like every second you were out there, it felt like parts of you were just freezing,” she said.

McKenzie and her family were eventually rescued by her father in his pickup.

The window-rattling storm brought blizzards, floods and a tornado across more than 25 states Wednesday, stretching from the northern Rocky Mountains to Texas and beyond.

“This is a very epic cyclone,” said Greg Carbin, chief of forecast operations for the National Oceanic and Atmospheric Administration’s Weather Prediction Center. “We’re looking at something that will go down in the history books.”

Scores of motorists took refuge at truck stops in eastern Wyoming while blowing snow forced portions of major highways to close in Colorado, Nebraska and South Dakota. Meanwhile, hundreds of flights were canceled at Denver International Airport, and nearly 40 were grounded in Colorado Springs.

The wind-whipped storm forced schools and government offices across the state to close for the day and cut power to several hundred thousand homes and businesses. Xcel Energy spokesman Mark Stutz said zero visibility made conditions difficult for repair workers, and it could take days to restore power to everyone.

The culprit was a sudden and severe drop in ground-level air pressure in Colorado, the most pronounced dive since 1950, Carbin said. It was caused by a combination of the jet stream and normal conditions in the wind shadow of the Rockies.

Air rushed into the low-pressure area and then rose into the atmosphere.

“It’s like a vacuum cleaner, really,” Carbin said. When that much air rushes higher into the atmosphere, it causes severe weather.

Meteorologists call the rapid change in pressure a “bomb cyclone” or “bombogenesis.”

A tornado in New Mexico ripped roofs from buildings in the small town of Dexter, about 320 kilometres southwest of Albuquerque.

Authorities said five people were hurt, but none of the injuries was life-threatening. A dairy euthanized about 150 cows injured by the tornado.

Chaves County Sheriff Mike Herrington said the tornado “took out” about 10 homes on one street.

High winds knocked 25 railroad freight cars off a bridge into a mostly dry riverbed near Logan in northeast New Mexico. No one was injured, New Mexico State Police said.