By the time Terrance Morin drove a stolen GMC Envoy into a swampy field north of Saskatoon he’d already dumped and burned almost everything he could tear out of the red SUV.

A chainsaw, a power drill, car mats and a bicycle cable. A Blu-Ray player and a helmet.  All burned in piles on the side of the road, the flames caught on infrared camera in the Saskatoon police plane.

With the stolen auto mired in the muck and RCMP closing in fast, all that was left to ignite was the SUV. And himself.

The mayhem of meth

Morin testified later that he had been high on meth and up for seven days when Saskatoon Police ran the plates on the red Envoy during a routine patrol on the city’s west side on the previous night of May 5.

The plates were not registered so the officers turned on their emergency lights to pull him over. In seconds, the Envoy bolted and accelerated so quickly that the officers immediately called off the ground pursuit.

The police plane was in the air that night. Over the next two-plus-hours, it tracked Morin’s high-speed ramblings across the city and into the country. The video footage from the plane, and from in-car RCMP cameras, were played in a Saskatoon courtroom during sentencing submissions on April 16, 2019.

The 37-year-old had pleaded guilty in provincial court to a range of charges, including dangerous driving, causing damage by fire, possession of stolen property and assaulting a police officer.

To hear the real-time police narration of Morin’s careening into oncoming heavy traffic is to appreciate how close he came to causing a catastrophic crash.

“This guy’s going to kill somebody,” an officer notes at one point.

He consistently accelerated to speeds in excess of 100 km/h.

Heading out of town

Just before midnight, Morin headed northwest of the city on Highway 16. At Range Road 3070, he stopped, took four 25-litre jerrycans from the SUV and lit them on fire.

Ten minutes later, he stopped at Auction Road and made a pile with a chainsaw, power drill, lockbox and speaker, dousing them with gas and starting another fire.

Continuing northwest, he began throwing items from the SUV as his speed climbed to more than 200 km/h per hour. As he crested the hill at the Borden Bridge he spotted an RCMP roadblock with stop sticks and reversed back toward the city. 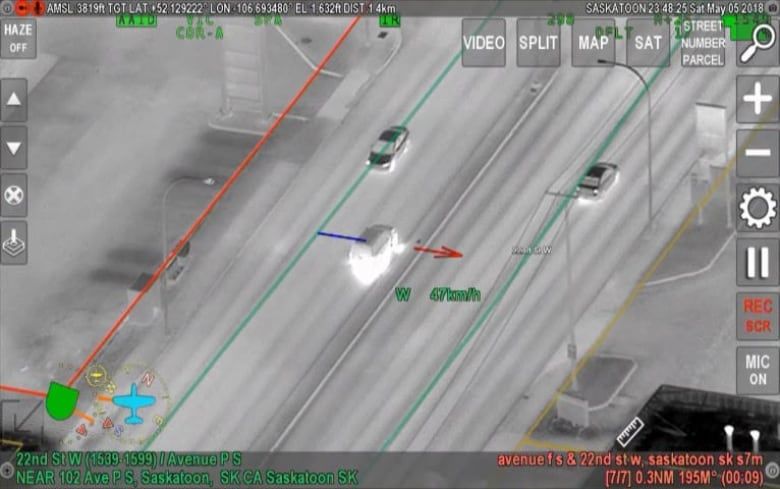 In the next 40 minutes, he avoided three attempts to flatten the SUV’s tires. The plane followed him as he meandered down country roads and into farmyards.

He was looking for more gas.

Finally, around 1:40 a.m. CST, RCMP tracked him to a fuel tank in a farmyard where he was trying to fill the cans. He rammed the RCMP cruiser and took off again. The officers were jarred but not injured and were able to continue the pursuit.

Morin drove through another farmyard and into a field, this time getting stuck in a swampy section. RCMP arrived in time to find him with a can of gas in one hand and a flaming cloth in the other.

“He’s dousing gasoline on himself and he’s threatening to burn himself up,” says an officer on the audio.

“They’ve got a life and death situation here. I believe he’s dumping gas on himself to commit suicide by cop. They’re going to need some help.”

Moments later, Morin lit himself on fire. An officer had retrieved a fire extinguisher and was able to put out the flames.

Morin was arrested and taken into custody. It was later described that, thanks to the quick action by the officers, his injuries were no worse than “a bad sunburn.”

Morin watched the episode in court and said he had no clear recollection of the events.

Prosecutor Barbara Herder argued for a custodial sentence of between five and six years, followed by a three-year driving prohibition.

Defence lawyer Jessie Buydens argued for a sentence 18 to 24 months, less the 17 months that he’s already served in custody.