A sheet of ice holding fishermen on Lake Erie broke loose in windy weather Saturday morning, sending many of them scrambling to safety but leaving nearly four dozen stranded on the floe for three hours more than a mile offshore until emergency crews could rescue them.

About 100 of 146 fishermen out on the ice were able to grab their gear and make it back to shore before any additional ice broke off, The Blade of Toledo reported.

One of the stranded fishermen, 42-year-old Tony Adkins, said the ice began to crack quickly and soon there was a huge gap between the ice floe and the shore.

“Thank God the Coast Guard was here for us,” Adkins, of Akron, Ohio, told The Blade. “You live and you learn, I guess.”

The U.S. Coast Guard and the Ottawa County Sheriff’s Office began receiving reports around 8:30 a.m. Saturday that a large number of people had become stuck on a floe broken off from the main ice pack connected to Catawba Island.

The Coast Guard launched helicopters out of Detroit, and along with local rescue personnel, sent airboats to retrieve the stranded fishermen, said Coast Guard Petty Officer Brian McCrum. Forty-six people were rescued, he said, including two fishermen who were hoisted by helicopter and medically examined. 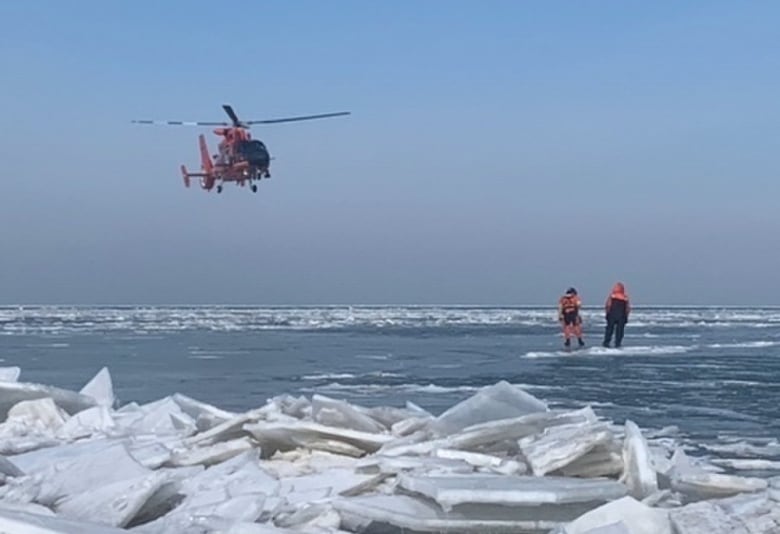 It ended up that no one was injured, authorities said.

James Gibelyou said he was too far from shore to make a run for it as he and others painfully watched the ice break.

“We were out about a mile and a half [2.4 kilometres], and out of nowhere that wind just picked up and everything broke fast,” said Gibelyou, 33, of Wakeman.

Gibelyou said that he noticed the weather was getting warmer Friday and that ice conditions were beginning to change. The fishermen should have called it quits then, he said, and “not come out this morning.” 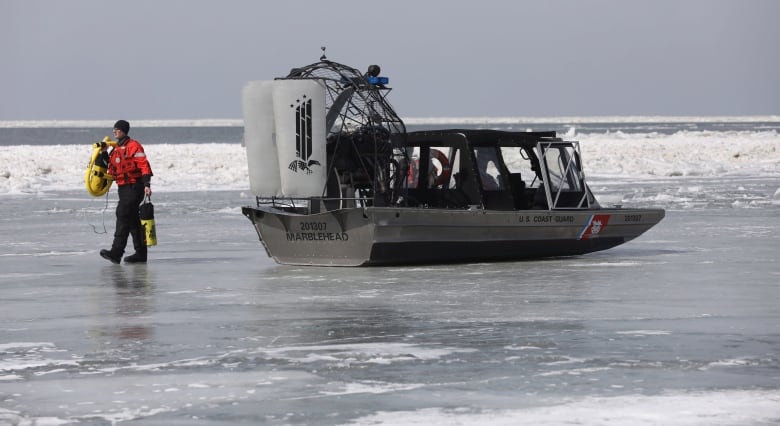 The weather wasn’t suited for fishing Saturday morning and caused a threat to the safety and lives of those who were on the ice floe, said Toledo fisherman and ice guide Mark Duszynski.

“The wind started shifting and opening up the ice. They can’t get across the cracks when they open that quick,” said Duszynski, who watched the rescue action from the shore. “They shouldn’t have been out that far. They couldn’t get back across. When that ice has room to move, it moves fast.”

In February 2009, one fisherman died and dozens of others were stranded on a Lake Erie ice floe.