The effort to clear people out of the area below the Bell Falls Dam in Quebec’s western Laurentians continues today as officials remain on high alert.

The worst flooding ever along the Rouge River led to a mandatory evacuation Thursday.

Water has been rushing over the 104-year-old dam at alarming rates, testing the limits of its structural integrity and ability to hold back the powerful river.

“Nothing happened last night, and we put in place some equipment that allows us to follow the flow of the river,” said Hydro-Québec spokesperson Francis Labbé said Friday.

Staff at the public utility are convinced the dam will hold even if water levels rise with the expected rain, he said, but the flow rate may increase by another 30 per cent in the next few days.

Because of that, “we cannot legally and morally guarantee that the structure will be able to hold such a pressure.”

Bell Falls, or Chute-Bell, is about 23 kilometres northwest of Grenville-sur-la-Rouge, Que., which is on the north side of the Ottawa River, across from Hawkesbury, Ont.

Grenville-sur-la-Rouge Mayor Tom Arnold says didn’t get much sleep overnight and he’s in for a long day as town officials, working with provincial police, will be going door to door to assure every last person flees the area. 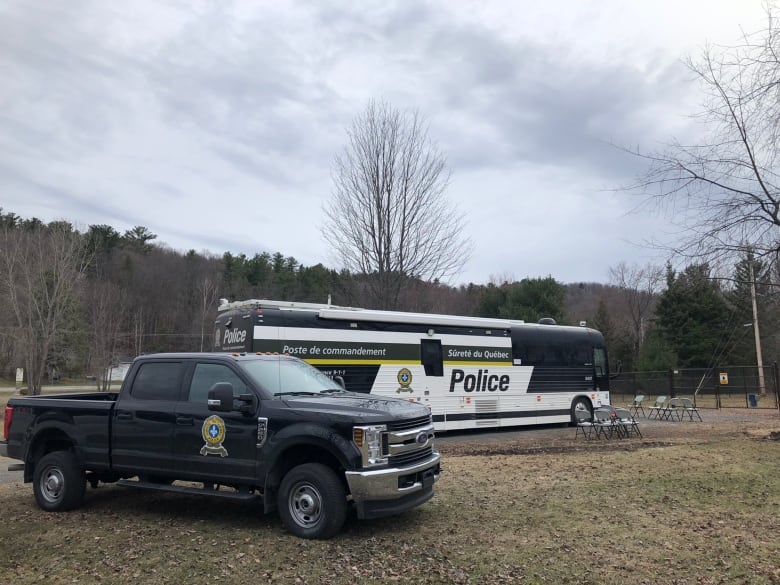 Quebec provincial police have set up a command centre near the Bell Falls Dam as officials work to clear residents out of the area. (Kate McKenna/CBC)

Should the dam fail, the effect will be devastating to the valley, he said.

Some 150 properties — a  mix of homes, camps and businesses — are at risk, and the mayor said his top priority is making sure nobody is left behind.

Material items can be replaced, Arnold said, but lives cannot.

Some refuse to leave their homes

Provincial police said about 60 people have been obliged to leave their homes so far. They were all mandatory evacuations, but there are stragglers in the more rural regions.

Officials said some 250 people total are being encouraged to vacate the Grenville-sur-la-Rouge area. 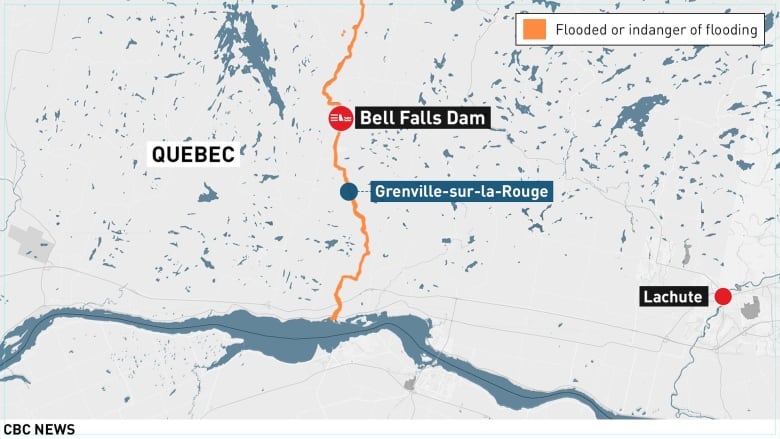 The Bell Falls dam is in danger of rupturing as the water level surpassed the dam’s capacity by noon Thursday. (CBC)

Most people were taken out by land, but about 15 were airlifted to safety by helicopter because their homes were completely surrounded by water.

“It’s a huge undertaking,” Thibaudeau said, speaking to CBC at a command post that provincial police have set up in the vicinity as evacuations continue Friday.

“It’s a rather complex territory, there are some houses you just cannot get to by land, they’re surrounded by water.”

Despite the warnings from Hydro-Québec engineers and the province’s public security minister, Arnold said some people are refusing to leave.

“Those are the ones I’ve been trying to convince and explain to them why they need to evacuate,” said Arnold, who grew up in the area.

Watch helicopter footage of the dam at risk of failing:

Quebec’s Public Security Ministry is warning that the hydroelectric dam at Bell Falls on the Rouge River in the western Laurentians region has reached its capacity. 2:15

“I think it’s just a matter of communicating the dangers to them face to face. And I think that we’ll get everybody’s co-operation.”

Like Arnold, many people have lived in the area their entire lives and, while they are used to the river flooding nearly every spring, it’s never been this bad, he said.