One week after the bombing, Negombo’s popular St. Sebastian’s Church is empty of life.

Pews have been pushed aside, the chapel floor swept, but still stained with blood from last Sunday’s attacks in Sri Lanka.

A headless statue stands on its pedestal; shards of coloured glass litter the paving stones outside as daylight floods through jagged holes in the roof.

Catholic churches across Sri Lanka are closed, armed soldiers posted outside. The archbishop of Sri Lanka, Cardinal Malcolm Ranjith, decreed no public mass today, warning that a leaked security document showed churches were a major target of an attack.

Muslim, Christian and Buddhist leaders are appealing for calm and tolerance in the wake of the bomb blasts that killed about 250 people. But they fear that extremism will drive a wedge between religious groups in Sri Lanka and encourage violent reprisals.

They were caught in the pews of St. Sebastian’s on Easter Sunday when the church became one in a series of targets of bombs set off across Sri Lanka. She was hit by debris, fainted multiple times, and nearly bled out. 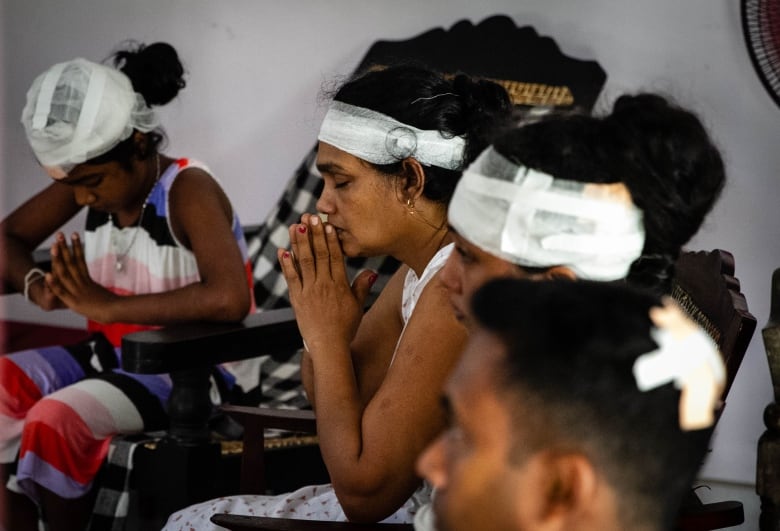 Jasmin Perera, centre, prays as she listens to a televised mass Sunday morning from her home in Negombo, a day after being released from hospital, along with her daughter Sashika, right and granddaughter Jayani, left. The three were wounded in the bombing last Sunday at St. Sebastian’s Church. (Susan Ormiston/CBC)

“I am asking — why am I alive? Maybe God still wants me alive so he’s keeping me. The lady next to me was broken in two,” said Perara.

Her daughter was gravely wounded as well. 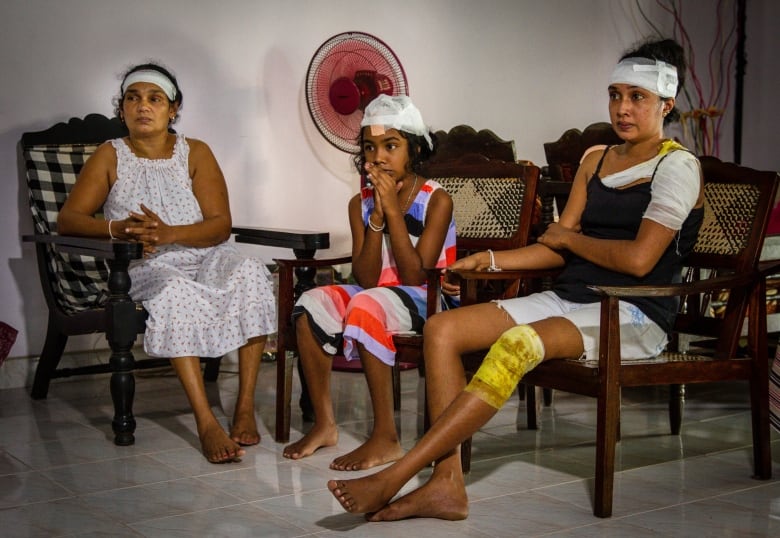 Jasmine Perera, left, sits with her granddaughter and daughter on Sunday, a day after being released from hospital. They are recovering from multiple wounds sustained in the Easter Sunday attacks. (Susan Ormiston/CBC)

“I remember a rain of tiles falling down on us,” said Sashika Jasmin Madushani, her head and shoulders bandaged. The blast blew out the roof.

They got out of the hospital only on Saturday, and went straight to the church to see it.

“It was like a jolt,” said Madushani, tearing up at the memory. 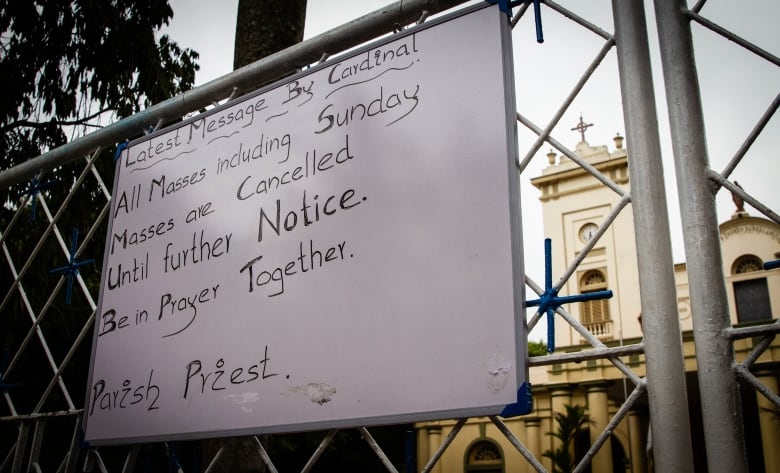 Catholic churches across Sri Lanka remain closed and the Archbishop of Sri Lanka decreed no public mass on Sunday following the leak of a security document that stated churches were a major target a week after the Easter Sunday attacks. (Lily Martin/CBC)

Sri Lanka is no stranger to ethnic and religious violence. Three decades of civil war between the minority Tamil Tigers and the majority Sinhalese deeply scarred the country. A decade of relative calm since has been punctured by growing tensions between Buddhist Sinhalese and Muslims. But until last week, the minority Christian community was almost never a target. 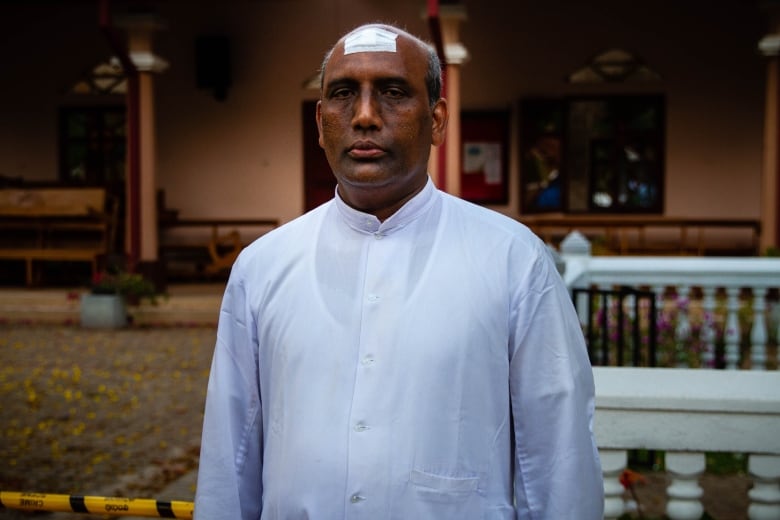 “I think people are still in a state of shock. Those who are affected are still grieving, and that grief sometimes turns to anger,” Saravanamuttu said.

“When are we going to be able to draw a line under this and say, ‘the worst part is over and we’re not going to have any kind of violence?'” 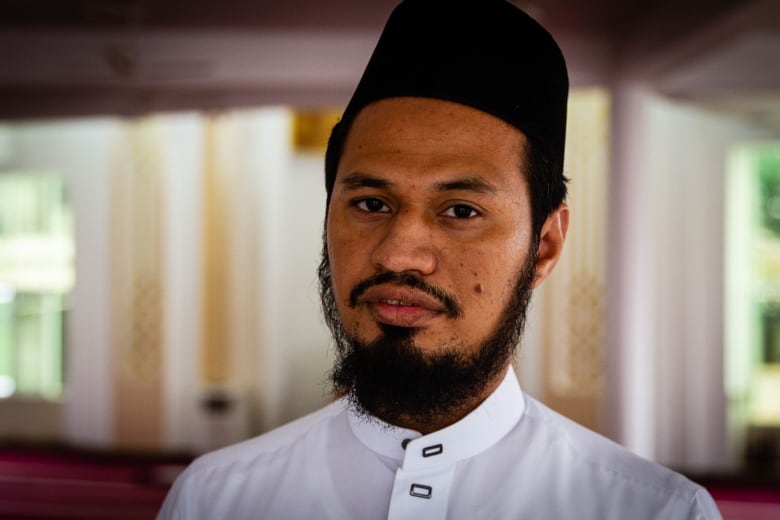 Imam Arkan Nooramith of the Dehiwala Mosque in Colombo is urging calm and co-operation with authorities, but acknowledges many Muslims fear reprisals. (Lily Martin/CBC)

Many, including the government, believe the nine suicide bombers — all Sri Lankans — were at least motivated and perhaps aided by extremists outside the country. A raid Friday night on a suspected safe house, near Sainthamaruthu in eastern Sri Lanka,  exposed a cache of explosives, ISIS uniforms and a flag possibly used in the video released by the extremist group last Tuesday.

But that doesn’t explain how this network of homegrown terrorism grew.

“Co-operate with the intelligence service, all of us will be, you know, checked,” he said. “Don’t get fearful — that’s what these terrorists want — but be very vigilant.”

Nooramith, an articulate 34-year-old, welcomed the CBC News team, saying he visits Canada once a year, often to meet with the large Sri Lankan diaspora in Scarborough. 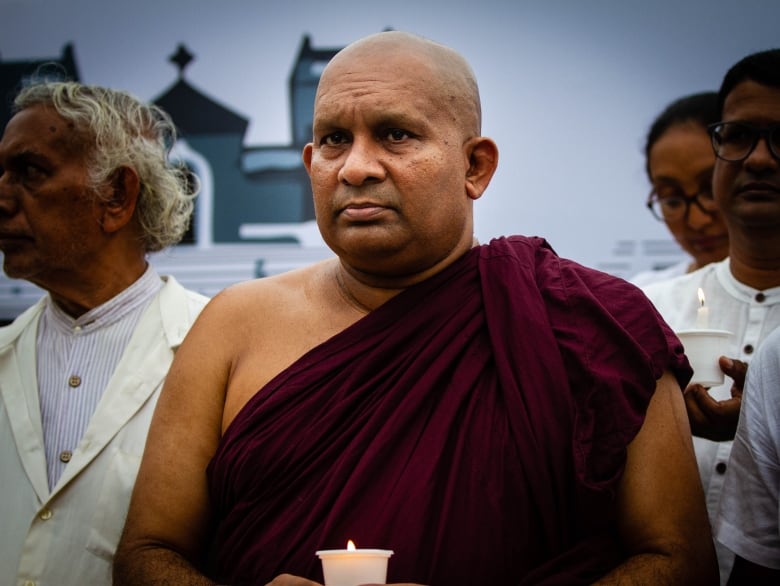 He acknowledges there is growing conservatism and extremism within some Muslim groups in Sri Lanka.

“You know, when ISIS came into existence in the world, the ISIS ideology, we noticed there was some youngsters, some families migrated from here and they went and joined ISIS,” he said.

“Some members died there, some came back. So from that time onwards, we were very alert and we were working very closely with the intelligence service whenever they mentioned that so-and-so is there. We have reported it.” 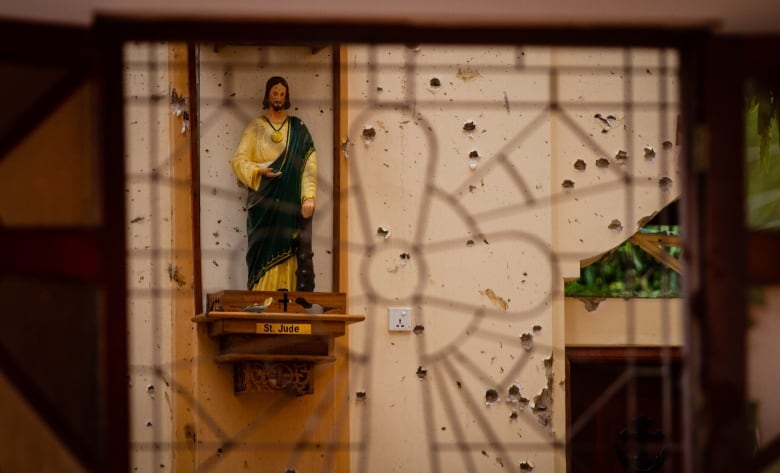 One week after the bombing, damage from the blast surrounds a statue of St. Jude at St. Sebastian’s Church in Negombo. (Lily Martin/CBC)

But escalating violent tensions between the majority Sinhalese Buddhists and Muslims have carved out resentment and mistrust.  Most recently in March 2018, violence and riots in the city of Kandy, prompted a state of emergency.

“There have been all the accusations that the Muslims are working in ways to push the Sinhalese into a minority position in the capitol, that they are giving Sinhalese women sweets to make them infertile,” he says.

“The violence, the animosity, Sinhalese Buddhist versus Muslim, certainly could have led to these people [Muslim extremists] becoming much more radicalized.”

Buddhism is the majority religion and has seen the rise of ultra-nationalist groups.

“We believe that certain Buddhist monks, only a handful, have taken steps that contributed to fuelling Muslim extremism,” says Venerable Dambara Amila Thero.

But the prominent monk squarely blames dysfunction in the Sri Lankan government for the lapses in security which meant India’s warnings of an attack were not heeded.

“Politics has contributed to all the loss of life,” he says.

He suggested there are people who think they will benefit politically from mistrust between ethnic and religious groups.

“Our national harmony, especially with the minorities, is a problem to those in power and those wanting to come into power. People in power want to separate us, they want to come into power with a majority Sinhala/Buddhist agenda. This is why we believe that this is a politically influenced situation.”

The question is what will happen now. CBC News spoke to a woman in a Muslim neighbourhood who is packing up her kids and moving out for a while. Police raided a house on the street last Sunday night and a woman with three children blew herself up.

“The kids are in shock,” the departing woman told CBC News as she got into a tuk tuk with bags of clothing.

“There is fear that now our community might get split into two,” says Imam Arkan Nooramith.

“One is the ordinary community and the other is the extreme group. People will have different views, but that should not lead to extremism.”

Some of the suicide bombers identified were from middle class and wealthy families. A wealthy businessman in the spice trade has been arrested after his two sons blew themselves up.

“What we’ve found is that these youngsters coming from a good background; they want to achieve the highest level of religiosity or [get to] paradise quickly.”

“This is a psychological problem. So some guys brainwash them and say, ‘OK you go blow [up] yourself.'”

“This is a real threat for Muslims in this country and Muslims around the world.”

Near the end of this tragic week, faith leaders gathered at Independence Square in Colombo for an inter-religious vigil. About 100 stood shoulder to shoulder, Buddhist Monks, Muslim women, Christians, holding candles, silently. It was a display of quiet force.

“We invite the international community to help us to rebuild,” says Venerable Dambara Amila Thero, “Come here — don’t abandon us because in a very short period of time, this existing sense of harmony,  will let us win this.” It is a fervent hope.