Firefighters in Paris declared success Tuesday morning in an over 12-hour battle to extinguish an inferno engulfing the iconic Notre-Dame Cathedral.

The two iconic 69-metre bell towers remained intact and swarmed with building specialists and architects at dawn, looking tiny from the ground as they conducted analysis. The cathedral’s spire and roof were gone, however.

Paris firefighters spokesman Gabriel Plus said “the entire fire is out” and that emergency services are currently “surveying the movement of the structures and extinguishing smouldering residues.”

“The task overnight was to bring the fire under control so it doesn’t re-start,” said Junior Interior Minister Laurent Nunez in front of the cathedral.

“The task is — now the risk of fire has been put aside — about the building, how the structure will resist,” he continued.

Officials consider the fire an accident, possibly as a result of restoration work taking place at the global architectural treasure, but that news has done nothing to ease the national mourning.

French President Emmanuel Macron pledged to rebuild the cathedral that he called “a part of us” and appealed for help to do so.

As the country woke up in collective sadness, its richest businessman, Bernard Arnault, and his luxury goods group LVMH answered this call with a pledge of €200 million (more than $300 million Cdn).

A communique said that the Arnault family were “in solidarity with this national tragedy, and join in the reconstruction of this extraordinary cathedral, a symbol of France, of its heritage and togetherness.” 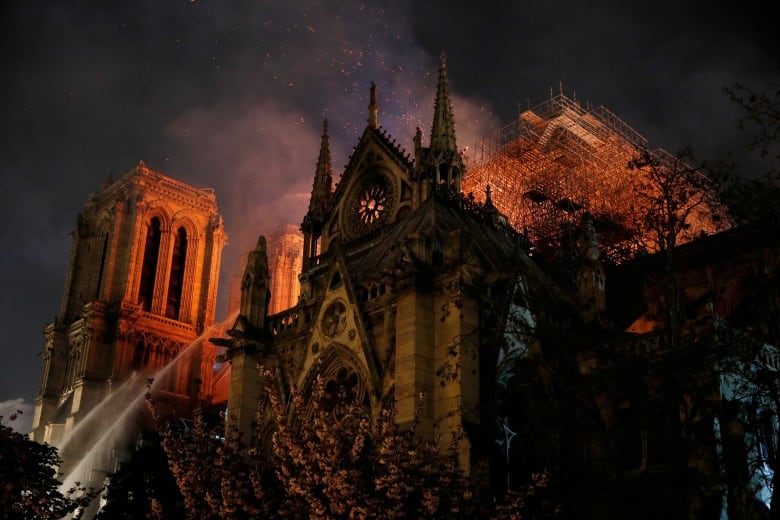 A statement from Francois-Henri Pinault said “this tragedy impacts all French people” and “everyone wants to restore life as quickly as possible to this jewel of our heritage.”

The 12th-century church is home to relics, stained glass and other works of art of incalculable value, and is a leading tourist attraction.

The cathedral’s spire was ruined in the massive fire.

A massive fire has engulfed the Notre-Dame Cathedral, one of France’s most visited sites, destroying the landmark’s roof and famed spire. 2:27

The devastation was a blow to all of Europe and all Europe will contribute to its rebuilding, leaders of the European Union declared on Tuesday at the European Parliament in Strasbourg, France.

EU chief Donald Tusk called on the bloc’s member countries to help France rebuild, saying the site in Paris is a symbol of what binds Europe together.

Tusk, who chairs summits of EU national leaders, told lawmakers Tuesday that the blaze reminds Europeans of “how much we can lose.”

“At stake here is something more than just material help,” Tusk said. “The burning of the Notre Dame cathedral has again made us aware that we are bound by something more important and more profound than treaties.” 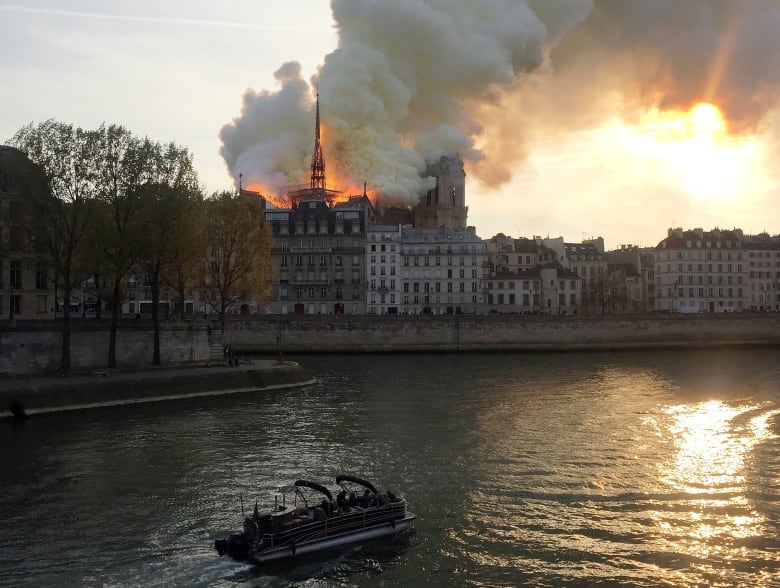 The local prosecutor’s office says the massive fire is being treated as an accident for now. (Julie Carriat/Reuters)

“We are all going through a moment of extreme sadness. The ‘Renaissance’ list is understandably part of this moment of national unity. We are therefore suspending the campaign until further notice,” Loiseau wrote on Twitter.

Macron’s ruling LREM party has put up candidates for the EU election under a list called ‘Renaissance’.