The news raised a few eyebrows at a community and public services committee meeting at city hall, when councillors heard that some or all of the park could be closed between three and eight years.

Pascale Ladouceur, the city’s director of engineering and lifecycle planning, said the department hasn’t determined whether the park will be fully closed for a shorter period or partially closed for a longer period.

The project could begin as early as 2022, the city’s website says.

Repairing the 50-year-old utilities, including water, sewage and gas, is a complex project, Ladouceur said.

“We have an irrigation system that is very intricate and that goes around the entire park because it is feeding all of the infrastructure,” she told the committee. “It is not a simple matter.”

Coun. Tim Cartmell suggested the proposed closure is too long.

“We can do neighbourhood rehabilitation projects in a year to 18 months, so I don’t see why a wide-open space would need to be closed for a number of years to do the rehab.”

Discussion about the park’s closure was spurred Wednesday by a presentation and a $750,000 funding request by the Edmonton Federation of Community Leagues.

The EFCL plans to build an outdoor plaza adjacent to the Heritage Amphitheatre in celebration of its 100th anniversary.

The plaza includes a fireplace, picnic areas and stage, redeveloping the stream with waterfalls, viewpoints, naturalized crossing and bridges, trails.

The EFCL has been working on the project, now estimated to cost $4.55 million, since 2011 and is worried the planned upgrades to Hawrelak will delay the opening of the plaza in time for centennial celebrations in 2021.

The biggest question is, where do festivals and events, held annually in the park, end up while Hawrelak is closed.

‘We have nowhere to go’

The park hosts several festivals including Winter Skate, the Rock Festival, Interstellar Rodeo, the ICU triathlon and the Heritage Festival.

Jim Gibbon, executive director of Heritage Festival, is dubious other locations can accommodate the food and culture event, which attracts 350,000 visitors each summer.

“As it stands now, we have nowhere to go,” Gibbon said.

He said the festival, going into its 46th year, would prefer the city close Hawrelak park in shoulder seasons to do the work. 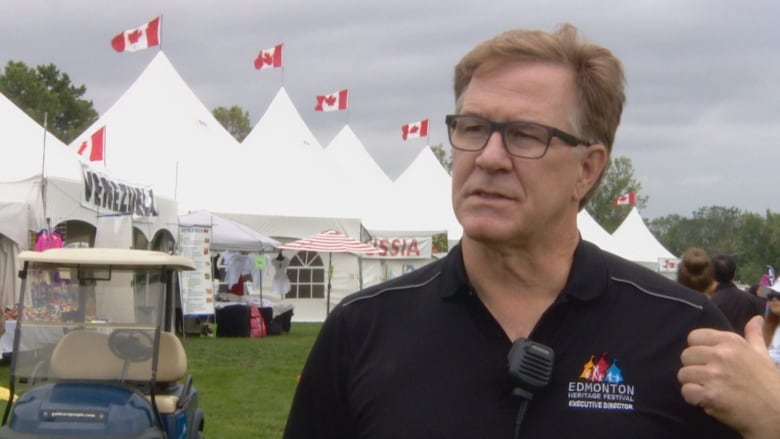 Jim Gibbon, executive director of the Heritage Festival, says no other site in the city is currently suitable for the annual cultural event. (Gabriel Brown/CBC)

“To do full shutdowns of your diamond-in-the-river-valley to fix the toilets is ridiculous,” he said. “So anything we can to try to minimize that would be great.”

Coun. Walters presented a motion to direct city administration to help the festivals and the EFCL in resolving their concerns.

The committee agreed, asking administration to report back in May with solutions, including a recommendation on providing $750,000 to the EFCL for the 100th anniversary plaza project.