Hundreds of homes flooded in several Midwestern states after rivers breached at least a dozen levees following heavy rain and snowmelt in the region, authorities said Monday while warning that the flooding was expected to linger.

About 320 kilometres of levees were compromised — either breached or overtopped — in four states, the U.S. Army Corps of Engineers said. Even in places where the water level peaked in those states — Nebraska, Iowa, Missouri and Kansas — the current was fast and the water so high that damage continued to pile up.

The flooding was blamed for at least three deaths.

“The levees are busted and we aren’t even into the wet season when the rivers run high,” said Tom Bullock, the emergency management director for Missouri’s Holt County.

He said many homes in a mostly rural area of Holt County were inundated with 1.8 to 2.1 metres of water from the swollen Missouri River. He noted that local farmers are only a month away from planting corn and soybeans.

“The water isn’t going to be gone, and the levees aren’t going to be fixed this year,” said Bullock, whose own home was now on an island surrounded by floodwater.

One couple was rescued by helicopter after water from three breached levees swept across 40,000 acres (16,188 hectares), he said. Another nine breaches were confirmed in Nebraska and Iowa counties south of the Platte River, the Corps said.

In Atchison County, Mo., about 130 people were urged to leave their homes as water levels rose and strained levees, three of which had already been overtopped by water. Missouri State Highway Patrol crews were on standby to rescue anyone who insisted on staying despite the danger.

“The next four to five days are going to be pretty rough,” said Rhonda Wiley, Atchison County’s emergency management and 911 director.

The Missouri River already crested upstream of Omaha though hundreds of people remained out of their homes and water continued to pour through busted levees. Flooding was so bad around Fremont, Neb., that just one lane of U.S. 30 was uncovered outside the city of 26,000. State law enforcement limited traffic on that road to pre-approved trucks carrying gas, food, water and other essential supplies. 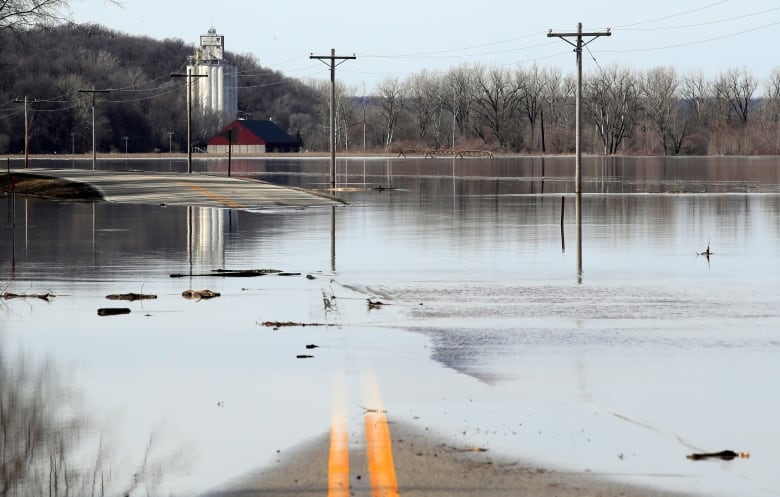 “There are no easy fixes to any of this,” said Fremont City Administrator Brian Newton. “We need Mother Nature to decrease the height of the river.”

In southwest Iowa, the Missouri River reached a level in Fremont County that was 0.6 metre above a record set in 2011. The county’s emergency management director, Mike Crecelius, said Monday that more water was flooding into low-lying parts of Hamburg, where a wall of sand-filled barriers was breached when one failed.

U.S. President Donald Trump tweeted Monday that he is staying in close contact with Iowa Gov. Kim Reynolds and South Dakota Gov. Kristi Noem about the flooding. Trump asked Vice President Mike Pence to go survey the flood damage in Nebraska Tuesday, White House Press Secretary Sarah Sanders said in the tweet . She did not say where in Nebraska Pence would go.

Reynolds, touring flood-ravaged areas of the state for the second straight day, warned that flooding will worsen along the Mississippi River as snow melts to the north.

The National Weather Service said the river was expected to crest Thursday in St. Joseph, Missouri, at its third-highest level on record. Military C-130 planes were evacuated last week from nearby Rosecrans Air National Guard base.

In North Dakota, Fargo was preparing for potentially major flooding along the Red River — the same river that ravaged the city a decade ago. Mayor Tim Mahoney declared an emergency and asked residents to help fill 1 million sandbags in response to a weather service warning that snowmelt poses a big risk in Fargo. Sandbag-filling operations start March 26.

In Illinois, weather service readings showed major flooding along the Pecatonica River at Shirland and Freeport, and the Rock River in the Rockford area and Moline. Freeport City Manager Lowell Crow said officials there expected the Pecatonica River “to possibly rise to a record level or at least to a level we haven’t seen in 50 years.”

The flooding started after a massive late-winter storm hit the Midwest last week.

The high water was blamed in the deaths of three people from Nebraska. Betty Hamernik, 80, of rural Columbus, was trapped in her home by the fast-rising Loup River. Her body was recovered Saturday. 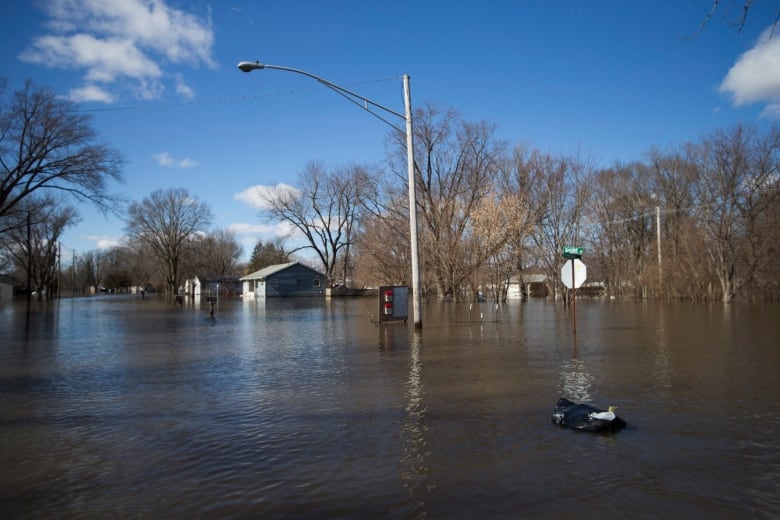 Flooding has been an issue in many areas of the U.S. Midwest, including Illinois. The Rock River crested its banks and flooded some areas on Saturday, in Machesney Park, Ill. (Scott P. Yates/Rockford Register Star/Associated Press)

Aleido Rojas Galan of Norfolk was swept away Friday night in southwestern Iowa, when the vehicle he was in went around a barricade. On Thursday, Columbus farmer James Wilke, 50, died when a bridge collapsed as he used a tractor to try and reach stranded motorists.

Two men in Nebraska have been missing since Thursday. One was last seen on top of his flooded car; the other was swept away after a dam collapsed.

The Missouri Department of Transportation reported about 100 flood-related road closures, including a stretch of Interstate 29.

Jud Kneuvean, emergency manager with the Army Corp of Engineers’ Kansas City district, blamed rainfall, snowmelt and higher temperatures “converging all at the same time.” No significant flooding was expected east of Kansas City, though Kneuvean said the Corps was monitoring closely.

“When you have a high river and have any forecast of rain on it, it can change the scenario very quickly,” Kneuvean said.