The deadliest tornado in Canadian history started about 16 kilometres southwest of Regina and touched down in the Queen City on June 30, 1912.

In the span of three minutes the tornado caused 28 deaths, 300 injuries and millions of dollars in damages in the city. Half of the city’s businesses and 200 homes were destroyed.

So what if it happens again?

South-central Sask. most at risk

A report released in late December says convective summer storms — which can include tornadoes, high winds, heavy rain and hail — are one of the biggest natural hazards Saskatchewan faces.

The Saskatchewan Flood and Natural Hazard Risk Assessment analyzed flooding, drought, forest fires, grass fires, summer convective storms, winter storms and earthquakes and their effects on the province. It also considered the impact of climate change and how it could play a role in the severity of these natural events.

“Aside from loss of life, a severe tornado could result in major damages to industrial or transportation sectors,” the report read.

According to the report, southern Saskatchewan is one of the most vulnerable areas in the province when it comes to tornado risks, particularly the south-central region.

Reflections from a century ago

Here’s the path the 1912 cyclone took highlighted over a modern day map of Regina. 0:26

Regina could expect similar — if not worse — levels of damage if another tornado like 1912’s hit the city, according to the risk assessment report.

The report estimated 150 people would die in a similar event, with more than 1,000 people injured, with another 13,000 people left homeless.

“Irreparable damage of at least $82 million to high-value structures would occur, and a decrease (sic) quality of life for communities and the surrounding area,” the report read.

Johnson witnessed an F4 tornado in Vilonia, Arkansas, in 2014. It ripped through the town, leveling houses in its path and killing 16 people. 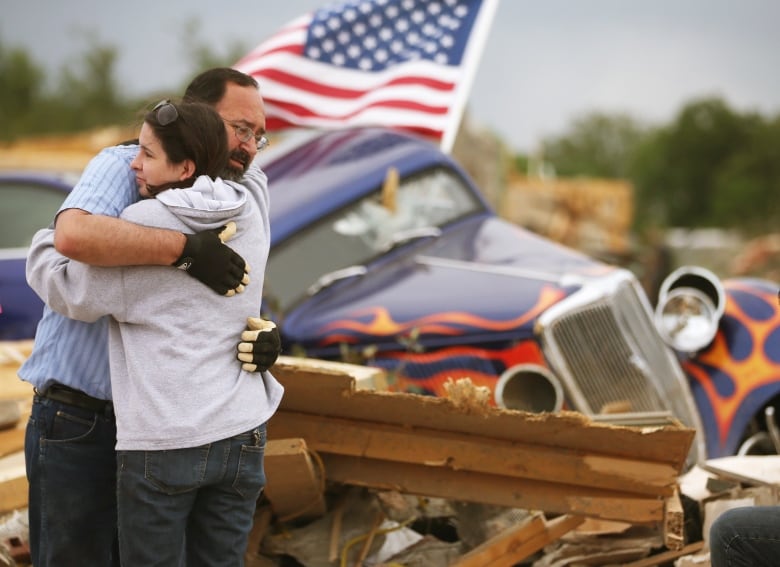 Dan Wassman gets a hug from a friend Amy Lundsford at the homesite of his son, also named Dan Wassum, who was killed when a tornado destroyed his home late Sunday afternoon, April 29, 2014 in Vilonia, Arkansas. (Mark Wilson/Getty)

Johnson spoke with a man afterward who estimated he had only 15 seconds to notify his family of the coming danger.

“They survived, because the entire family had crawled into the bathtub,” Johnson said. “When dad yelled the word ‘tornado,’ everyone in the household knew exactly what to do. That’s preparation.”

Johnson acknowledged the province had taken steps in the right direction in introducing the SaskAlert tool, which sends text messages to wireless customers in the province when an event that poses risks to public safety are happening, but said the biggest step Saskatchewan could make would be more public education.

“We don’t talk about what to do in the event of a tornado. We don’t have tornado drills at schools,” Johnson said.

He said the infrastructure to survive tornadoes is already in place almost everywhere.

“If you’re in your basement, you’re going to do just fine. People survive tornadoes all the time.” 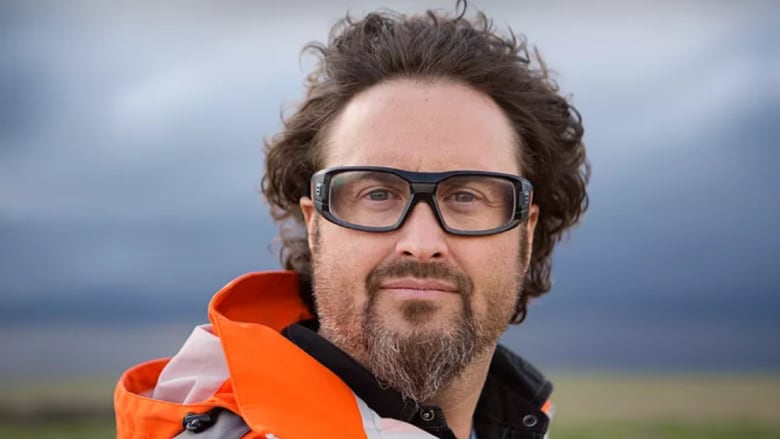 Greg Johnson is the host of Tornado Hunters. (Courtesy of Greg Johnson)

City of Regina fire chief Layne Jackson said that across the province, different organizations participate in Emergency Preparedness Week, a week dedicated to raising awareness about public safety and what to do in the event an emergency strikes.

Jackson said the city feels very confident about dealing with another situation like 1912. While he wouldn’t speculate on how much of damage a tornado like that would cause, he said the city has a plan in place to deal with a variety of scenarios that could play out, the All Hazards and Emergency Response Plan.

“It puts the framework in place for how we would deal with that type of major emergency or disaster type scenario,” Jackson said.

Jackson said the city has a fully-functional emergency operations centre that’s ready to go as soon as a major incident happens. 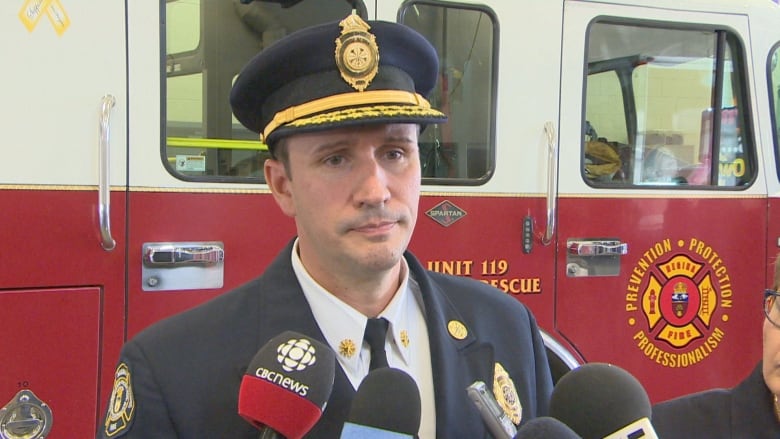 He said there are plans in place and staff participate in training exercises to prepare them for catastrophic events like tornadoes.

Miller said the health authority uses an incident command structure that’s standardized across all facilities. The system is a military-style approach to planning and conducting operations.

“That kind of forms our backbone to responding to an incident when it actually happens,” he said. 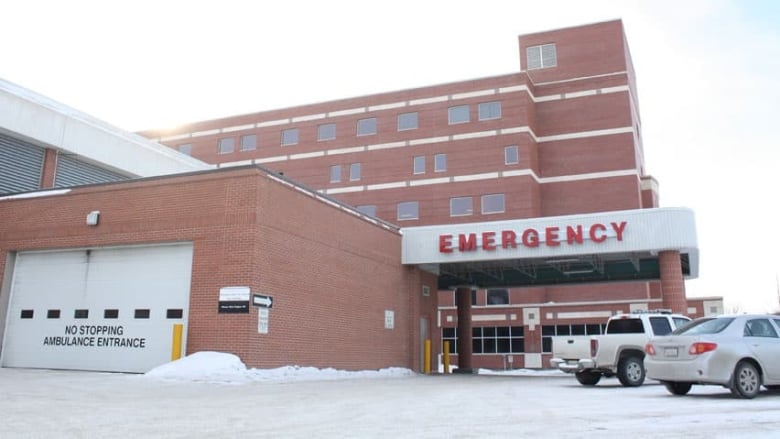 Depending on patient intake, people may be directed to hospitals outside of Regina for treatment. (CBC News)

He said an incident commander would be identified and put in charge of planning and coordinating a response to any major event.

Miller said that, if a tornado was happening, staff would typically take cover in the same way anyone would in their home. Patients may be moved to “optimal locations” within the hospitals to ensure their safety.

What role hospitals would play in the aftermath would depend on how much damage they sustained.

“We would certainly want to, to the extent possible, continue to operate out of the facilities as long as we were safe to do so,” Miller said. “If something happened that the facility was no longer safe to occupy, then we would evacuate or partially evacuate.” 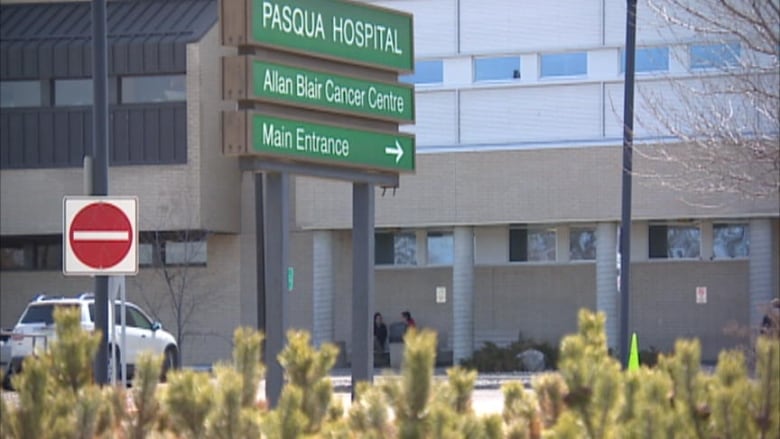 According to the SHA, code orange plans are in place at both the Regina General and Pasqua hospitals.

He said emergency response plans include evacuation procedures that dictate who is responsible for what.

He said each facility is also responsible for maintaining a “code orange,” a plan to deal with events where injuries or casualties exceed the hospital’s capacity.

“This is an important area to prepare for because we do see catastrophic incidents or emergencies that exceed our capacity at our hospitals at different levels,” Miller said.

He said the code orange plans outline each department’s responsibility in a catastrophic event.

Miller said resources would be coordinated between the two hospitals in Regina and patients could be redirected to other hospitals in nearby cities.

He said in a tornado similar in magnitude to 1912, communication is essential. Hospitals would be reaching out and trying to figure out how to work with the city. 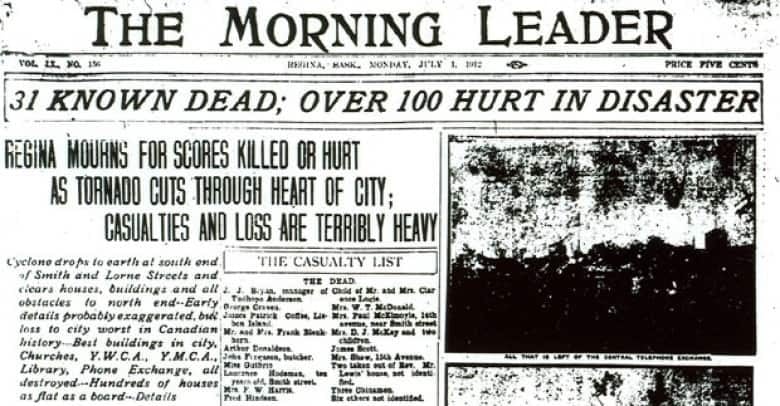 The front page of local newspaper The Morning Leader the day after the tornado struck. (Regina Plains Museum/Saskatchewan Archives)

Miller said the provincial government emergency planners would also be involved. Federal resources would likely be made available to help local entities respond to the disaster.

“We wouldn’t be doing it solo. We would be reaching in and leveraging the different tools and resources that different agencies might be able to bring to the table to assist with the situation.”

Preparation is key for Regina Airport

The provincial Flood and Natural Hazard Risk Assessment said the transportation sector could sustain major damages in the event of a severe tornado. 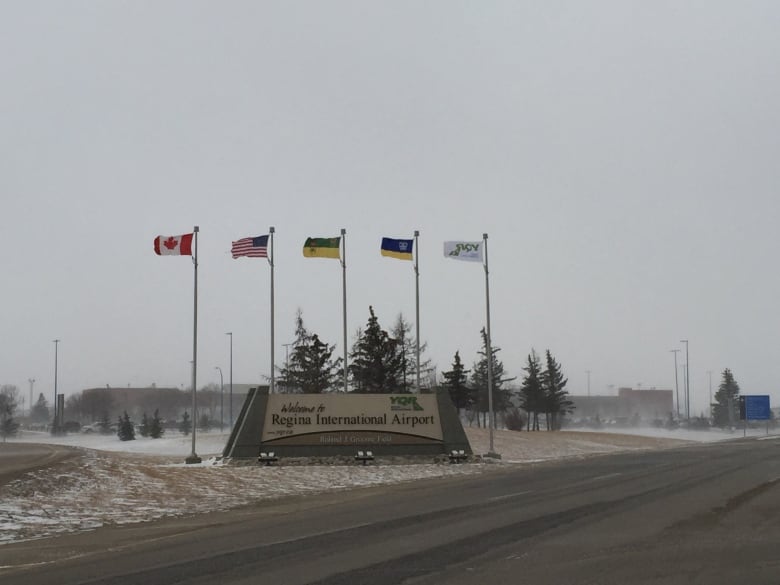 In the event the Regina Airport is in the direct path of a tornado, people would be directed to the basement “catacombs” according to Regina Airport Authority executive director James Bogusz. (Kirk Fraser/CBC)

Bogusz said anytime the airport is notified of a major weather event discussions are held to figure out if any changes need to be made to daily operations or if the Emergency Response Plan needs to be activated.

“That basically gives our staff and management some predetermined guidelines on how to react,” he said.

He said in the event the airport gets short advanced notice of a tornado, aircraft are directed to land elsewhere. The focus then becomes the people and staff in the terminal building.

Bogusz said the airport works with airline partners and customers to get people home if possible. Anyone stranded in the building would be directed to the airport’s emergency operations centre, which he described as a secure room filled with monitors where staff can try and help get the customers out of the building.

The airport would also try to let the public know not to come to the airport.

“If people did come, we obviously wouldn’t reject them. In the case of a tornado, we’d be using our extensive basement for some protection.” 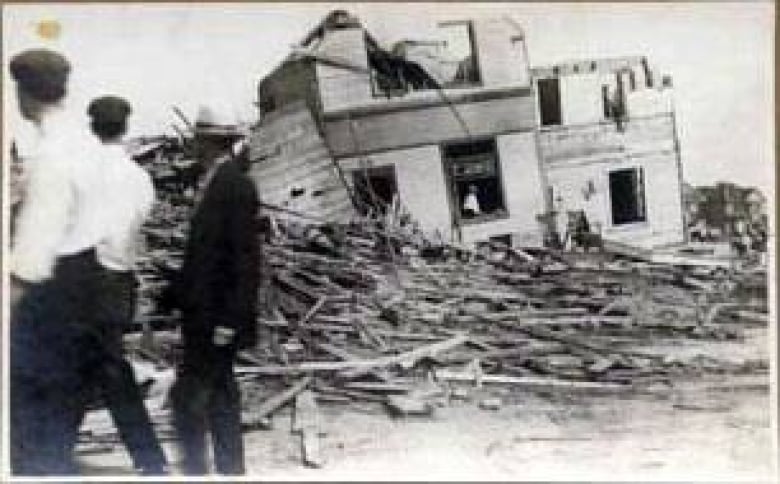 The tornado of 1912 left rubble all over the heart of Regina. (City of Regina archives)

If the cellular network goes down, airport staff have radios for communication.

There is equipment capable of clearing the runway from debris. In a high wind event, staff members inspect the runway and use large sweeping machines to clean runways so planes can land.

In the event of a tornado that doesn’t directly hit the airport, but does hit another area of Regina, Bogusz said the airport’s focus would be helping the city in any way possible.

“Airports are going to be critical,” he said. “We’ve got STARS here for example.”

He said that until he made, the facility would be manned 24/7 with staff working around the clock to ensure the main runway is cleared. 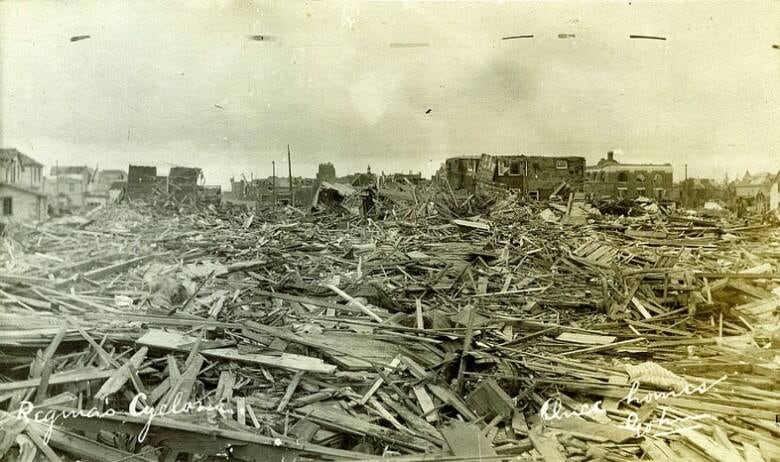 Many houses of the era were built out of wood and when the tornado struck. They were shattered into splinters. (University of Alberta)

If power is knocked out for any length of time, backup generators kick in and keep the airport’s runways, terminal building and key emergency systems running. Diesel and unleaded fuel are also kept on site to prevent relying on outside sources for a few days.

He said as long as the airport staff have the ability to access those backup generators, most of the airport is useable.

In the event of the backup generators being damaged, or inaccessible, there are still backup power sources. He said air traffic control can still operate on battery power for a few hours if required.

Preparation is key, according to Bogusz. He said he’s held two full-scale exercises in his 10 months at the airport to get a sense of what works and what needs refinement.

Does the new report change anything?

Jackson said the City of Regina is still reviewing the Saskatchewan Flood and Natural Hazard Risk Assessment. He said the city’s manager of emergency preparedness was involved in creating the report.

“If there’s changes that need to be made, we’ll make those changes,” Jackson said.

Bogusz said officials at the Regina Airport hadn’t yet seen the report, but it was “coming down the pipe.”

Miller said the Saskatchewan Health Authority was in the preliminary stages of reviewing the report and that it was shared internally.