Nearly 260,000 homes and businesses in Quebec were still without power Tuesday morning after freezing rain moved through the province yesterday.

Hydro-Québec spokesperson Louis-Olivier Batty said the power company has deployed every available team to restore power as quickly as possible.

“In many areas, before our crews can access the network, we have to clear these branches and trees, so it’s not helping our crews to do the work,” he said.

Laval officials kept two community centres open overnight for people to keep warm. A staff member at the Vimont  community centre and only a handful of people spent the night there.

The bulk of the outages are in Laval, the Laurentians and the Lanaudière regions, prompting school boards in those areas to close schools for the day.

Guy Dumont, a janitor with the CSDL for 30 years, stopped by work to take out the trash and recycling before heading home Tuesday morning to try to keep warm with his kids. 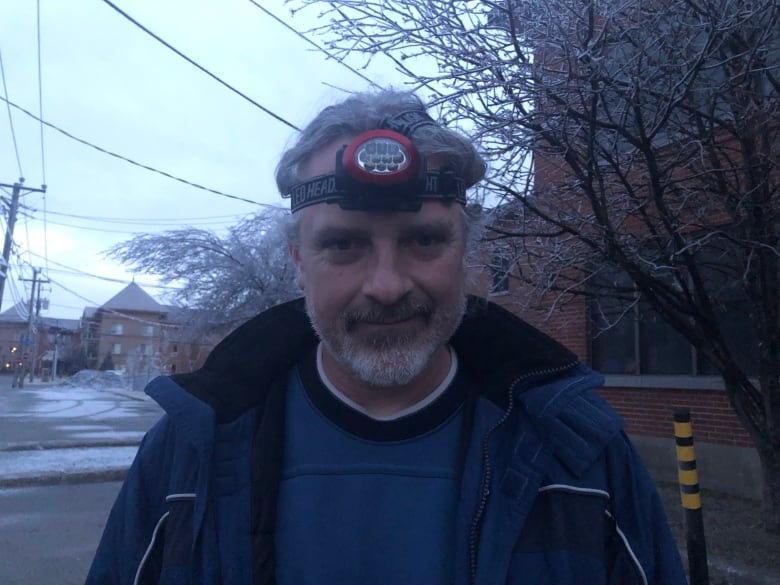 Guy Dumont, a janitor in Laval, was wearing a headlamp at 6 a.m. while he tidied up at Les Explorateurs school on Bédard Street. (Kate McKenna/CBC)

“My kids are home too because there is no school [for them] too,” said Dumont, who was wearing a headlamp at 6 a.m. while he tidied up at Les Explorateurs school on Bédard Street.

There are also outages in Montreal as well as the Montérégie, Mauricie and Outaouais regions.

The power outages come after freezing rain and snowy weather rolled through southern Quebec on Monday, coating much of the province in ice and prompting more than a dozen schools to close early.

Hydro-Québec said about 310,000 customers in the province were without power as of 9 p.m. Monday. Officials blamed the combination of icy conditions and high winds for the outages.

Yannick Roussy woke up Tuesday to see a lot of branches on his property in Laval. He has been without power at his home since 10:30 a.m. on Monday.

He was heading into work Tuesday not knowing if there was power there, but he was certain he’d be ending the day by cleaning up his property.

“I don’t have a choice,” he said. “My trees look a little bit sick. A lot of branches fell. A lot are broken.”