When Jarome Iginla joined the Kamloops Blazers as a 16-year-old rookie in the Western Hockey League back in 1993, there were two jersey numbers available — 11 and 12.

Having grown up in St. Albert as a fan of the Edmonton Oilers, Iginla wanted No. 11 — in honour of the legendary Mark Messier.

That stuck with him through his junior career — where he won two Memorial Cups with the Blazers — and most of his 22 years in the NHL, 16 of those with the Calgary Flames. 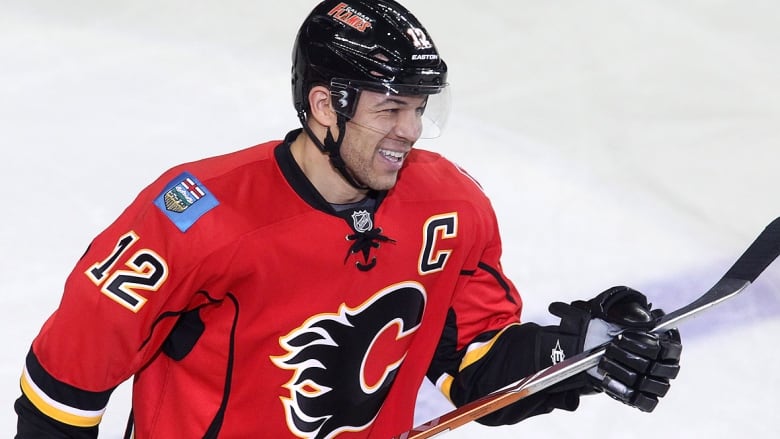 And on Saturday, the Flames will retire Iginla’s now-iconic No. 12 before they face the Minnesota Wild at the Saddledome. Doors open at 5:30 p.m. MT and the ceremony begins at 6:30 p.m. MT. Game time is 8 p.m. MT.

“I’m nervous how it’s going to go, but I’m just trying to take it in, it’s neat to be back,” he told reporters during a luncheon at the Saddledome on Friday afternoon.

“I’ll probably be a little emotional. It’s very special. I have a lot of family and friends coming in and it means a lot.” 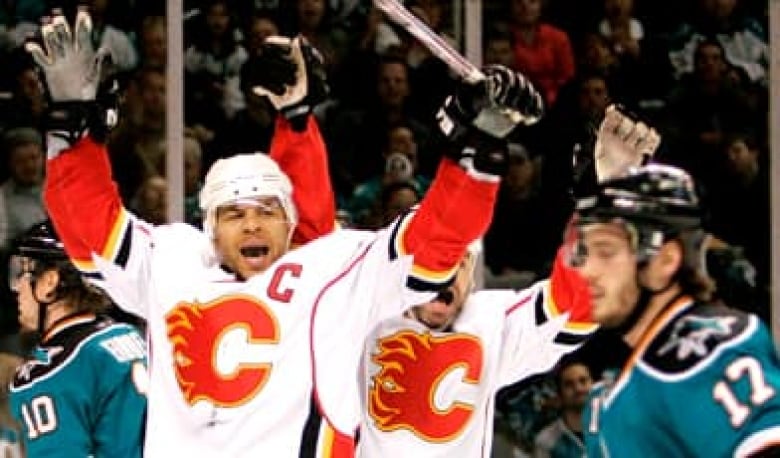 Iginla actually wore No. 24 when he started as an NHL rookie with the Flames, as Paul Kruse — also a product of the Blazers — already had No. 12.

But when Kruse was traded halfway through the 1996-97 season, then-Flames general manager Al Coates offered Iginla his No. 12 and the rest is history.

Iginla also wore No. 88 in his final season with the Los Angeles Kings, a nod to Wayne Gretzky being traded there in 1988.

He was captain for nine of his 16 seasons in Calgary.

Looking back, Iginla said he considers his entire career — from minor hockey to the NHL — as one giant highlight. 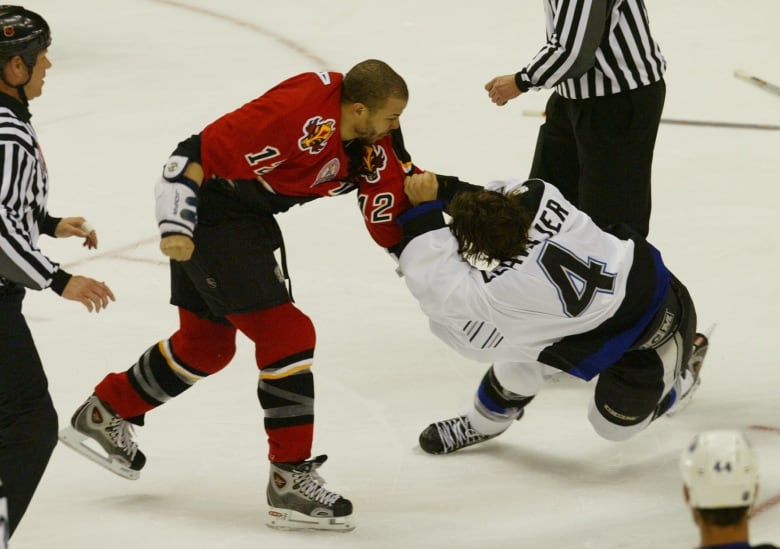 Jarome Iginla will always be remembered by Flames fans for his high intensity play, including this fight with Tampa’s Vincent Lecavalier in the 2004 Stanley Cup final. (Dave Sandford/Getty Images)

“I have been thinking about different things that were really cool and mean a lot to me. It was really the whole game of hockey I’ve been involved in since I was a little kid,” he said.

“Literally, I loved playing minor hockey in Alberta. We won the provincials three times, and two of my best friends, I’ve been friends with since we were nine years old and playing hockey together.

“Those were amazing times. I go to junior, I get to play with the crew there that I got to play with. It was so much fun. The world juniors were awesome, I see highlights of that and I’m like, ‘man, that was a great time.’ The Olympics. Playing with Sidney Crosby on the line. So many little things.”

The 2004 Stanley Cup run where the Flames made it to the final, was particularly special. 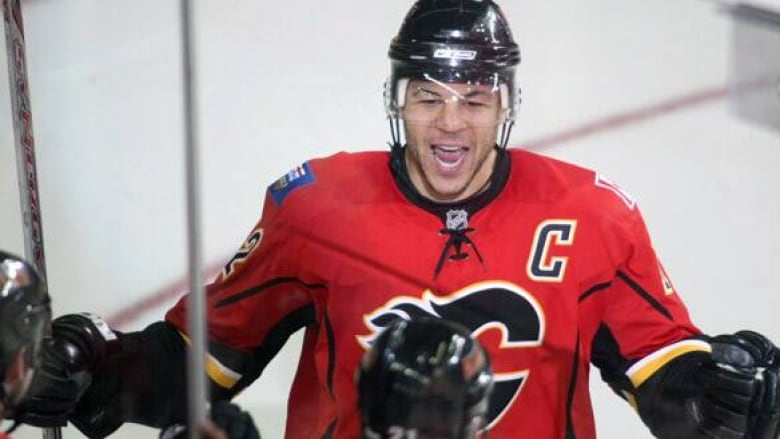 “It was pretty cool. It was awesome … how the city was into it with us,” he said.

“Not just the fans in the building, but the whole city was into it.”

Iginla was a fan favourite in Calgary who was known to go above and beyond for the Flames faithful, like the time he reached out to the Allen family.

Back in 2004, Drew Allen was about to celebrate his seventh birthday, so he sent invitations to the entire Flames roster. 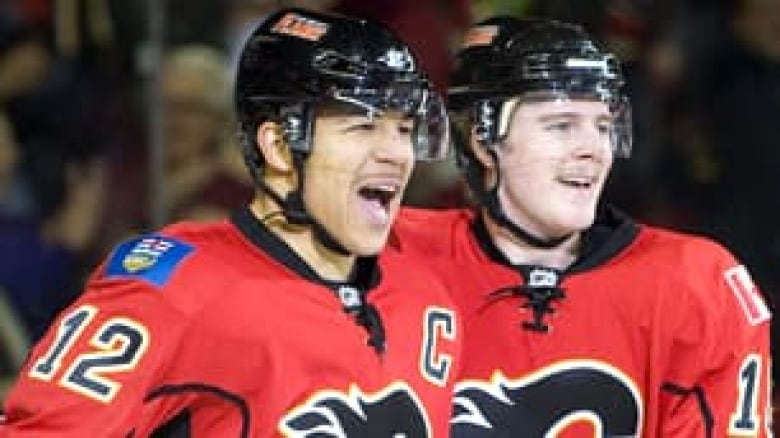 Iginla was traded to the Pittsburgh Penguins in 2013. He also suited up for the Boston Bruins, Colorado Avalanche and the Los Angeles Kings.

“I was in my kitchen one day and the caller ID on the phone said Pengrowth Saddledome. And I thought, well, somebody is trying to sell me season tickets,” Drew’s mom, Shannon Tomney, told the Calgary Eyeopener.

“I answered the phone and this very nice gentleman said, ‘I am Jarome Iginla’s personal assistant, are you Drew Allen’s mother? I kind of panicked because my son was always in trouble for something. And so I said, ‘yes why are you calling?

“And he said, ‘well Mr. Iginla received a Spiderman birthday party invitation to your son’s seventh birthday party in August, but unfortunately he won’t be able to attend because he’ll be playing in the World Cup.”

The story of a Calgary boy who invited Jarome Iginla to his birthday party, and forgot to tell his mom. 7:09

His assistant then asked if it would be okay for Iginla to send a gift instead.

“It was pretty awesome for somebody turning seven years old to get an autographed photo from somebody you thought you’d never hear back from,” said Allen, who plans to be at Saturday’s ceremony along with his girlfriend.

“That was pretty good feeling.”

He was traded to the Pittsburgh Penguins in 2013. He also suited up for the Boston Bruins, Colorado Avalanche and the Kings.

He won two Olympic gold medals and was a member of Team Canada when it won the 2004 World Cup of Hockey.

He was awarded the Art Ross Trophy as the leading scorer in 2002, as well as the Maurice “Rocket” Richard Trophy in 2002 and 2004 as the leading goal scorer.

He was also awarded the Lester B. Pearson Award as the league’s most valuable player, as voted by the players.