Gerald Krabbe is taking his mid-century Calgary bungalow into the future with a soon-to-be-connected 5½-kilowatt photovoltaic solar panel system. The panels will supply enough electricity to keep everything running in his 1,400-square-foot home when the sun is shining — and any excess power will be returned to the grid.

“Hopefully, in the next couple of years, I’ll use considerably less coal and use solar, which is free,” he said.

Krabbe says the solar rebate program brought in by Alberta’s former NDP government played a significant role in his decision to go ahead with the project, but he says it was something he was going to do, with or without the program (whose official name is the Residential and Commercial Solar Program).

“Regardless of the cost, using solar is a step forward,” he said.

Last month’s change in government in Alberta (the United Conservative Party headed by Jason Kenney won a majority) is creating a lot of uncertainty about the future of the rebate program — and the future of Energy Efficiency Alberta, the government agency that administers the rebates designed to encourage Albertans to switch to renewable energy sources. 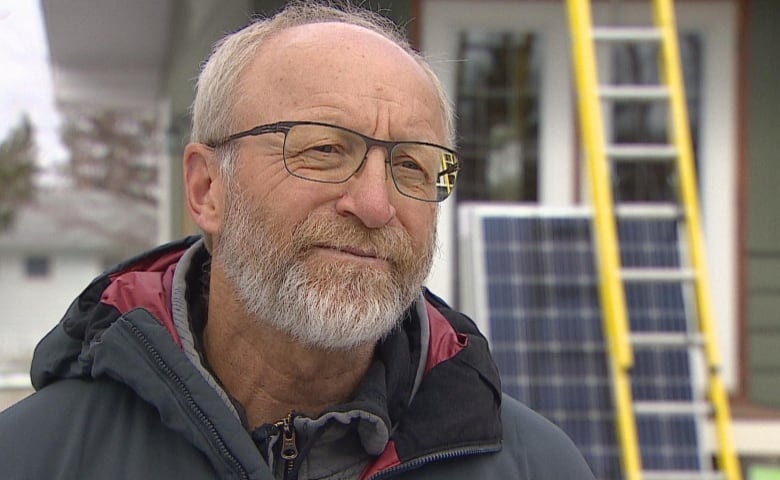 Gerald Krabbe took advantage of a provincial rebate program that lowered the cost of solar panels for his Calgary house. The program’s future is unclear after the UCP won a majority government in April. (Colin Hall/CBC)

Krabbe, a recently retired math teacher, said the numbers made sense for him. The system cost about $13,000, but the province returned about a third of that, using money from the carbon tax.

But there could be dark clouds on the horizon for Energy Efficiency Alberta and the millions in incentives that have so far been doled out.

“Given that it’s early days for the newly elected provincial government, it will take some time to determine the future of this program,” said Doris Kaufmann Woodcock, a spokesperson for the agency.

“Once decisions are made, we will share information publicly, including with the solar industry,” she added in an email to CBC News.

Kaufmann Woodcock said more than 1,500 residential and commercial solar projects have been completed and 900 more are in the works. Most of them, 2,200, involve residential projects.

The original goal of the program was to invest $36 million to generate 48 megawatts of electricity by 2020.

Kaufmann Woodcock didn’t say how much has been installed so far.

“Alberta’s solar industry is well on its way to meeting this goal,” and $134 million has been invested in solar projects in Alberta, she said.

Customers ‘sitting on the fence’

Mike Daciw, who used to work in oil and gas, is now behind one of about 250 solar companies operating in Alberta.

“Just looking at the trends and the cost of solar coming down over the years, we thought this was kind of the wave of the future, and we just wanted to jump on it,” he said.

Daciw and another oil and gas refugee started EvolvSolar a few years ago. The company now has 23 employees working across the Prairies.

Jayman Built now offers a minimum of six ‘non-negotiable’ solar panels on every new home it builds in Alberta. The program started in January 2019 and the company predicts it will build 750 homes this year. (Colin Hall/CBC)

Daciw fears that as many as 50 of those companies could go dark if the rebates in Alberta end, since demand for solar will likely take a hit without the incentives.

Daciw says he’s written about 100 quotes for potential customers who are “sitting on the fence,” waiting to see what the new government will do.

He predicts his company will survive, but will likely pull up stakes in Alberta.

“For the province of Alberta, it’s a shame. Rule 1 of investing is to diversify, and if we [the government of Alberta] put all of our eggs in one basket [in the oil and gas industry], I think it’s a lot of risk to bear,” he said.

The association that represents the solar industry in Canada says the sector has seen massive growth since the rebates were brought in in 2017: 500 jobs in the last few years, bringing the estimated workforce in Alberta to almost 2,000.

It predicts that number could increase fivefold over the next decade.

“There was a recent study put out in Alberta stating that there could be up to 10,000 jobs in the solar industry sector in the next 10 years,” said Wes Johnston, president of the Canadian Solar Industries Association. 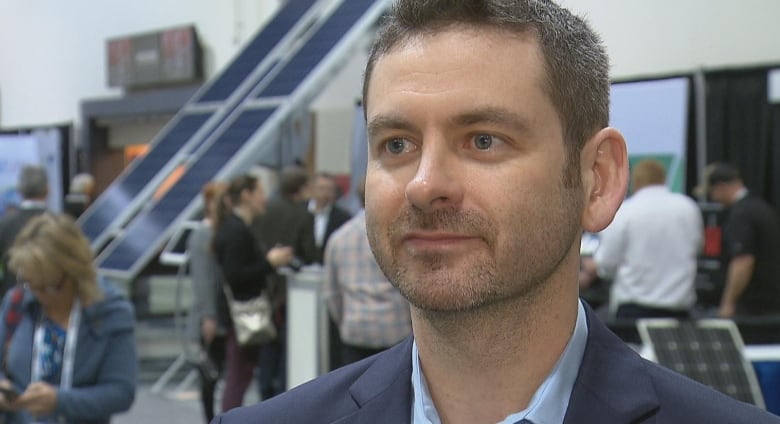 Wes Johnston, president of the Canadian Solar Industries Association, believes the solar industry will create 10,000 jobs in Alberta over the next decade. (Dave Rae/CBC)

An Alberta homebuilder has jumped on the solar bandwagon. Four months ago, Jayman Built announced all of its new homes, roughly 750 per year, will each be equipped with six solar panels, producing about two kilowatts of electricity. The company president describes the policy as “non-negotiable,” and says the reaction from customers has been positive.

“They want to do the right thing when they buy a house,” said Dave Desormeaux.

“They want to decrease their operating costs, and we’ve seen a big uptake; it’s really improved our sales performance.”

The company plans to continue with the program, whatever the future of the rebate program.

“No intention of going back,” he said.

‘This is Alberta’s future’

Energy experts, and even the solar industry itself, realize government-funded incentives will eventually come to an end as the cost of solar comes down and the industry becomes self-sufficient. But they seem to agree that now is not the time for rebates to end in Canada.

“It’s a bad thing in the short term,” said Chris Bataille, an energy and climate researcher at Simon Fraser University in B.C.

“It’s probably a little early in Canada,” he said.

“We’re just on the cusp of a transition in order to meet our Paris Agreement goals; we need to dramatically reduce our emissions.”

But Bataille says rebates should eventually be discontinued.

“Once the industry is built, you really don’t want rebates in the long haul; you want it to move on its own.”

His advice for the new government?

Reduce the rebates if you have to, but don’t kill them just yet.

“Realize that this is a job-builder … This is an industry-builder. This is Alberta’s future that you’re playing with here; you need to encourage the growth of this industry.”