Iran said Wednesday it was scaling back curbs to its nuclear program under a 2015 deal with world powers, and threatened to do more — including enriching uranium to a higher level — if countries did not shield it from U.S. sanctions.

A year after the United States pulled out of the nuclear deal with Iran, President Hassan Rouhani said Tehran would halt a program to sell excess enriched uranium and heavy water to other countries, an arrangement used under the nuclear deal to keep its own stockpiles below permitted caps.

Rouhani threatened that in 60 days, Iran would resume enrichment of uranium beyond the low level permitted under the deal unless the five other powers signed up to it find a way to protect Iran’s oil and banking industries from U.S. sanctions.

“If the five countries came to the negotiating table and we reached an agreement, and if they could protect our interests in the oil and banking sectors, we will go back to Square 1,” Rouhani said.

“The Iranian people and the world should know that today is not the end of the JCPOA,” he said, using the acronym for the nuclear deal. “These are actions in line with the JCPOA.”

The 2015 deal was signed between Iran, the U.S., Russia, China, Britain, France and Germany. Iran agreed to curbs on its nuclear program in return for the lifting of sanctions.

Since U.S. President Donald Trump pulled his country out of the accord, the U.S. has restored crippling economic sanctions on Iran even as Tehran continued to abide by the accord, according to United Nations inspectors.

France’s defence minister said she wanted to keep the nuclear deal alive and warned Iran it could face more sanctions if it did not honour its part of the deal.

“Today nothing would be worse than Iran, itself, leaving this agreement,” Florence Parly told BFM TV.

In response to these developments, Israeli Prime Minister Benjamin Netanyahu said his country would “not allow Iran to obtain nuclear weapons.”

Netanyahu has been an outspoken critic of the 2015 agreement between Iran and world powers, and welcomed Trump’s withdrawal from the deal last year. He considers Iran to be Israel’s greatest threat, and Iranian leaders frequently condemn Israel and call for its destruction. 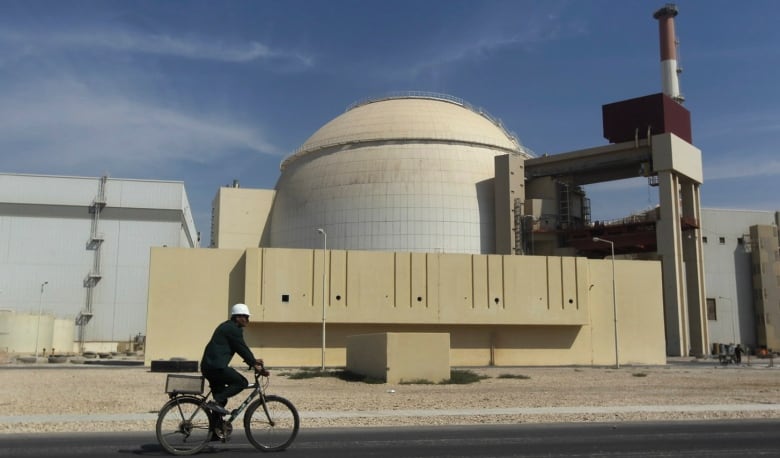 This photo from 2010 shows the reactor building of the Bushehr nuclear power plant in Iran. (Majid Asgaripour, File/Mehr News Agency via Associated Press)

Netanyahu, speaking Wednesday at a state Memorial Day ceremony in Jerusalem, said Israel “will continue to fight those who seek to take our lives, and we will thrust our roots even deeper into the soil of our homeland.”

Iran has denied ever seeking nuclear weapons, insisting its atomic program is for entirely peaceful purposes.

Zarif, in Moscow for talks, told Russian Foreign Minister Sergei Lavrov that Iran’s actions did not violate the original terms of the nuclear agreement and Tehran now had 60 days to take the necessary diplomatic steps.

The Kremlin, meanwhile, said Iran had been provoked into rolling back some of the terms of the nuclear deal due to external pressure, which it blamed on the United States.

“President [Vladimir Putin] has repeatedly spoken of the consequences of unthought-out steps regarding Iran, and by that I mean the decision taken by Washington [to quit the deal]. Now we are seeing those consequences are starting to happen,” Kremlin spokesperson Dmitry Peskov told reporters on a conference call.