Israel killed two Hamas militants in air strikes on Gaza on Friday, and two Palestinian protesters were killed in clashes with Israeli forces along the enclave’s border.

The strikes were a response to gunfire from southern Gaza that wounded two Israeli soldiers, the Israeli military said.

Hamas, the Islamist group that rules the Palestinian enclave, said two members of its armed wing had been killed and three wounded when Israel bombed one of its positions in central Gaza.

Later on Friday, two Palestinians shot by Israeli troops while taking part in weekly protests along the border died of their wounds, Gaza health officials said.

The Israeli military said some 5,200 Palestinians had amassed along the frontier, but did not immediately provide further comment.

The protesters are demanding an end to a blockade imposed by Israel and Egypt. They also want Palestinians to have the right to return to land from which their families fled or were forced to flee during Israel’s founding in 1948, which Israel rejects.

More than 200 Gazans have been killed by Israeli troops since the Great March of Return started on March 30 last year, according to Gaza health officials. An Israeli soldier was also killed by a Palestinian sniper. 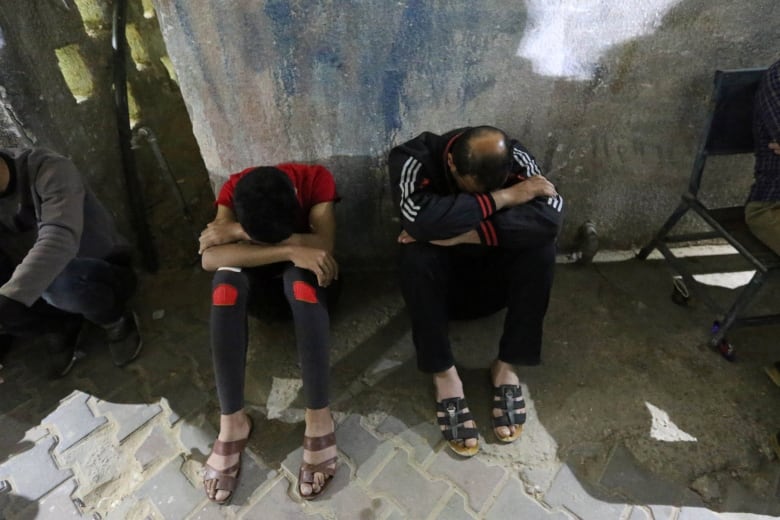 Also on Friday, two Palestinians were shot and killed by Israeli troops as they participated in a protest along the border, according to Gaza health officials. (Ibraheem Abu Mustafa/Reuters)

Egyptian mediators, credited with brokering a ceasefire after a Hamas rocket attack north of Tel Aviv in March set off a burst of intense fighting, have been working to prevent a new escalation.

Hamas said in a statement on Thursday that its Gaza chief, Yeyha Al-Sinwar, had traveled to Cairo for talks on efforts to maintain calm along the border and alleviate Palestinian suffering.

Some two million Palestinians live in Gaza, whose economy has suffered years of blockades as well as recent foreign aid cuts. Unemployment stands at 52 per cent, according to the World Bank.

Israel says its blockade is necessary to stop weapons reaching Hamas, which has fought three wars with Israel in the past decade.

Cairo’s mediation had helped persuade Israel to lift some restrictions on the movement of goods and people in and out of Gaza and expand the Mediterranean zone where Gazans can fish.

But Israel scaled back the zone this week in response to rocket fire from Gaza, a spokesperson for its military liaison agency with the Palestinians said.