A man who broke an Edmonton woman’s arms with a crowbar in an early-morning road-rage attack has been found guilty of aggravated assault.

Court of Queen’s Bench Justice Adam Germain delivered his decision on Friday. He also found the attacker, Jared Eliasson, guilty of possession of a dangerous weapon and mischief.

But Germain found Eliasson not guilty of attempted murder. The judge said he was left with a reasonable doubt that Eliasson intended to kill his victim.

Around 7 a.m. on March 7, 2017, Chelsey Schendzielorz honked at a driver in a small silver car blocking an intersection in the King Edward Park neighbourhood of southeast Edmonton.

The encounter was captured on Schendzielorz’s dash camera.

Schendzielorz travelled a couple of blocks to park in front of her house. As she sat chatting on the phone to her father, a silver car drove up beside her, then backed up and parked behind her vehicle.

She said the driver got out holding a crowbar and hit her twice, breaking both her arms. 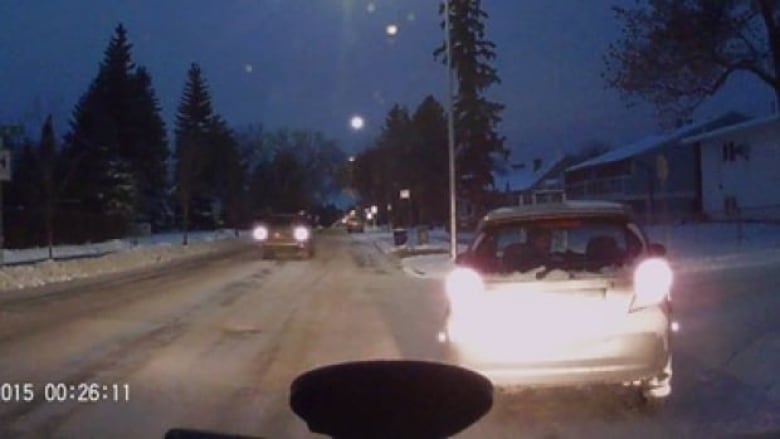 Edmonton police say they have arrested the driver of this car who attacked a woman with a crowbar, breaking both of her arms. (Edmonton Police Service)

Eliasson, who was delivering newspapers at the time, admitted he was the driver in the vehicle that was honked at.

But he denied his involvement in the attack.

Judge refers to 17 denials of guilt made by Jared Eliasson in police interview, ““I do not believe his denials of guilt.” <a href=”https://twitter.com/hashtag/CBC?src=hash&amp;ref_src=twsrc%5Etfw”>#CBC</a> <a href=”https://twitter.com/hashtag/yeg?src=hash&amp;ref_src=twsrc%5Etfw”>#yeg</a>

Germain said the circumstantial evidence against Eliasson was “very strong.”

Any suggestion Eliasson was not the person who assaulted Schendzielorz is “ludicrous,” the judge said.

Eliasson, who remains free on bail, is to be sentenced on July 2. Germain has ordered a pre-sentence report. 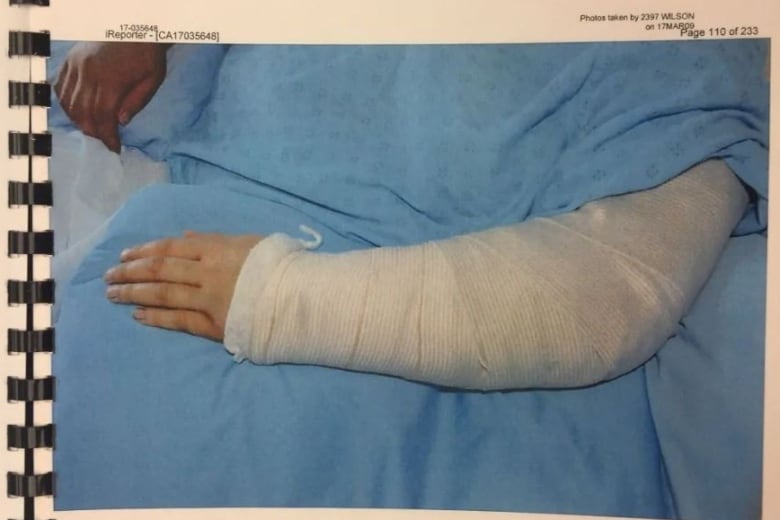 Chelsea Schendzielorz was in hospital for a week after the attack. (Edmonton Police Service)