The inquest into the death of Scott Johnson, the Radiohead drum technician killed in the June 16, 2012, stage collapse in Toronto, will hear closing submissions Tuesday.

In the past two weeks, much has been revealed about problems with the stage and communication on the ground as it was constructed.

The inquest began on March 25, nearly seven years after the tragedy, and after the courts failed to find anyone responsible.

The inquest aims to find out what went wrong and what can be done to prevent future stage collapses.

One of the more troubling revelations was that the stage construction deviated from the engineered plans in several significant ways.

It was a bombshell moment in an afternoon of scorched-earth testimony as Dale Martin, the owner of Optex Staging, told the inquest the design for a pickup truss in the stage plans was “garbage.”

On the stand Martin was at times belligerent, contradictory, and arrogant to the point he had to be cautioned by the coroner’s counsel, Deanna Exner, of the gravity of the matter. Martin also took responsibility for his part in the collapse, saying that he and his people failed. 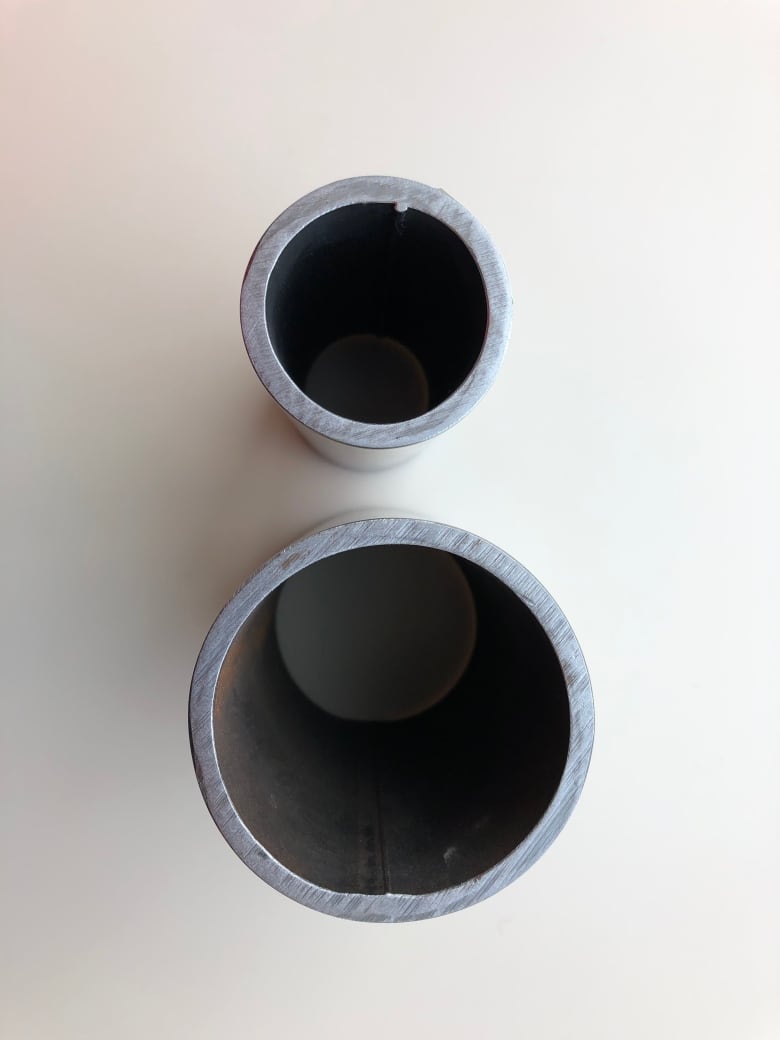 A photo of a two-inch tube and a three-inch tube was entered as evidence. The load-bearing pickup truss of the stage was supposed to be 10 feet long with a three-inch-thick tube along its top and bottom, but such a truss never existed, the inquest heard. (Katie Nicholson/CBC)

In fact, he told the inquest, the truss never existed even though the stage had been erected many times over its 30-year lifespan. Martin told the inquest he and his crew simply worked around the design and used other components.

The load-bearing pickup truss was supposed to be 10 feet long with a three-inch-thick (7.6 cm) tube along its top and bottom.

Martin told the Inquest that it was a bad drawing and a mistake, and that he never had such a piece in his inventory.

He also told the inquest he repeatedly asked the engineer to remove it from the stage plans but every year the plan would come back with the same three-inch component.

“Optex had a laugh about it for years because it kept showing up after we asked him to get rid of it.” said Martin, whose dramatic responses temporarily derailed questioning. “It wasn’t a ‘ha ha ha’ funny, it was a sad joke.”

The engineer whose seal appears on some of the pages of the stage plans disputes that claim. Domenic Cugliari was adamant that he believed that the three-inch component existed and was used in construction of the stage. The inquest heard that the component would be able to bear a heavier load than the smaller two-inch (5 cm) components that were actually used. 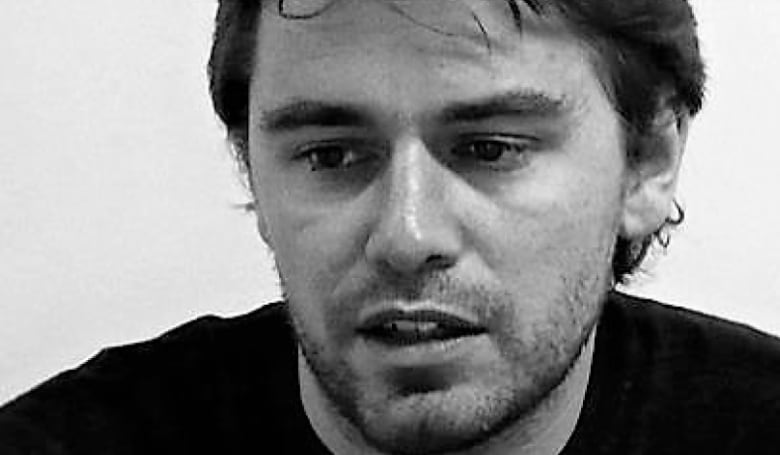 Former Optex Staging staff who had constructed the stage over many years testified that the three-inch component was never in inventory, and they always worked around it. It did not appear on the equipment list for the construction.

Rigger Shannon Cogan told the inquest he always assumed the design was a typo.

“I don’t know what this three-inch things is,” he told the inquest.

The inquest also learned the crews didn’t have enough clamps to secure the stage components that day.  The design called for crucial roof beams to be held in place with a series of four clamps.

Cogan told the inquest Optex staff told him to use just two clamps instead of the four called for in the design. The coroner’s counsel, Prabhu Rajan, asked Cogan how far away the Optex warehouse was and whether more clamps could have been obtained.

Doug Perovic, a forensic engineer at the University of Toronto, said outside the inquest that the lack of clamps may have contributed to the collapse by allowing structural beams to shift as the pickup truss started to be crushed under the weight of the roof load. 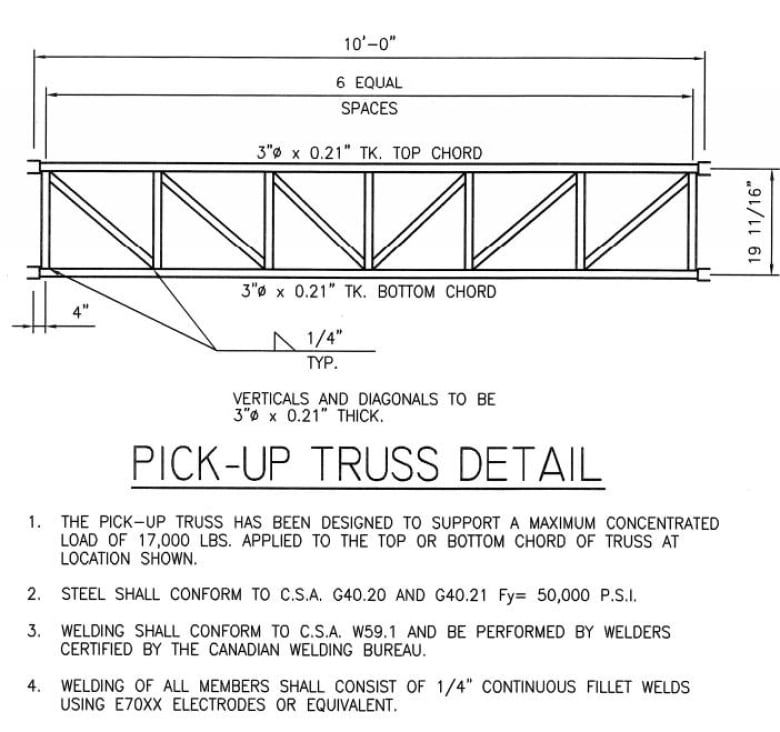 The stage plans for the truss assembly drawing called for the three-inch top and bottom tube. (Inquest exhibit)

“Once things started moving in a way that they’re not meant to be moving, you start getting gradual collapse under the cathead beams and now you’re going to have components shifting around if they’re not sufficiently clamped,” Perovic said.

“The lack of clamping may have contributed to the progressive failure of the structure,” Perovic said. “The whole thing didn’t fall down. It fell down in one corner.”

Ralph Southward, another engineer following the inquest, isn’t sure the clamp shortage played a major role in the collapse.

“Clamps had nothing to do with it.  It was a horribly overloaded pickup truss,” Southward said.

Cogan told the inquest  that, as crowds of concertgoers thronged outside the gates roughly five minutes before the stage collapsed, he noticed bracing was missing from one of the towers.

Cogan testified he told a worker to climb up and add the missing diagonal metal bracing to the structure but conceded it was unlikely the worker had the chance to do it before the whole thing came tumbling down.

While the missing brace likely didn’t play a pivotal role in the collapse, Perovic says, it does speak to “the sloppiness of this construction.”

Unauthorized revisions to the plans

Those three noticeable deviations from design were far from the only eyebrow-raising revelations at the inquest.

Time-lapse video showed workers assembling the stage in the wee hours of the night before the show.  Witnesses spoke of confusion as to who was actually in charge on the ground, and the inquest heard no building or project permits were sought, nor were they necessary.

Watch time-lapse video of the construction of the stage:

A time-lapse video shows workers assembling the Radiohead concert stage in Toronto’s Downsview Park in June 2012. The video was entered as an exhibit at the coroner’s inquest into the stage collapse that killed the band’s drum technician. 0:58

In one brief exchange, Ken Brault, a production manager from Live Nation, told the coroner he was discouraged by Downsview Park from applying for a permit because the venue was on federal land. 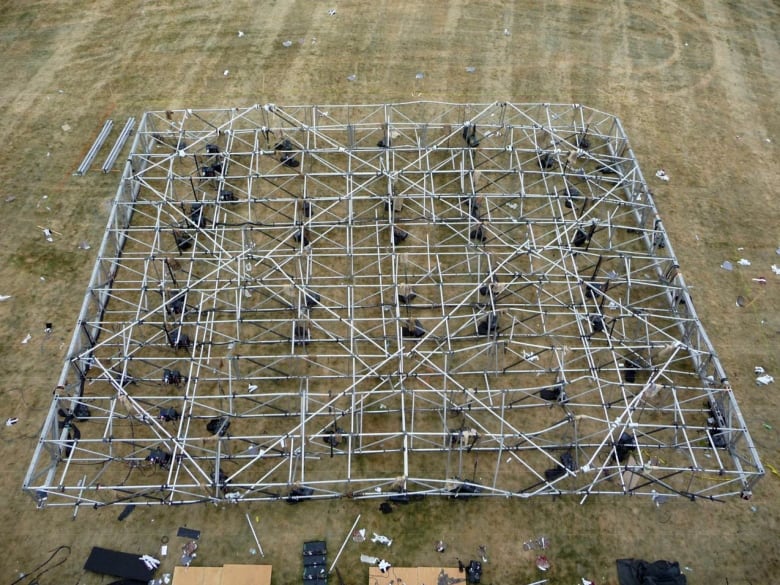 The roof assembly of the Downsview stage. (Inquest exhibit)

The inquest heard testimony from many who were on the ground the day of the collapse. One Optex Staging employee said the stage they were using was obsolete. Lindsay Shipway also admitted to making changes to the engineered plans, adding information to the “title block” of those plans — something only the engineer should do.

Another, Al (Izzy) Gullion, who said he helped erect the stage some 30 times, was worried this time too much was being asked of it.

The roof load was roughly 76,000 pounds (34,500 kg). Engineering and building code experts told the inquest it should have been designed to bear that load and much more, a concept known as a factor of safety (FOS).

“It was very heavy. More on it than I ever saw before. It was pushing limits,” Gullion testified.

“I spoke with pretty much everybody on site about my concerns.”

But, as the inquest heard, no one single person appeared to be in charge that day. Concerns that were reported didn’t result in preventative action, and Scott Johnson died. 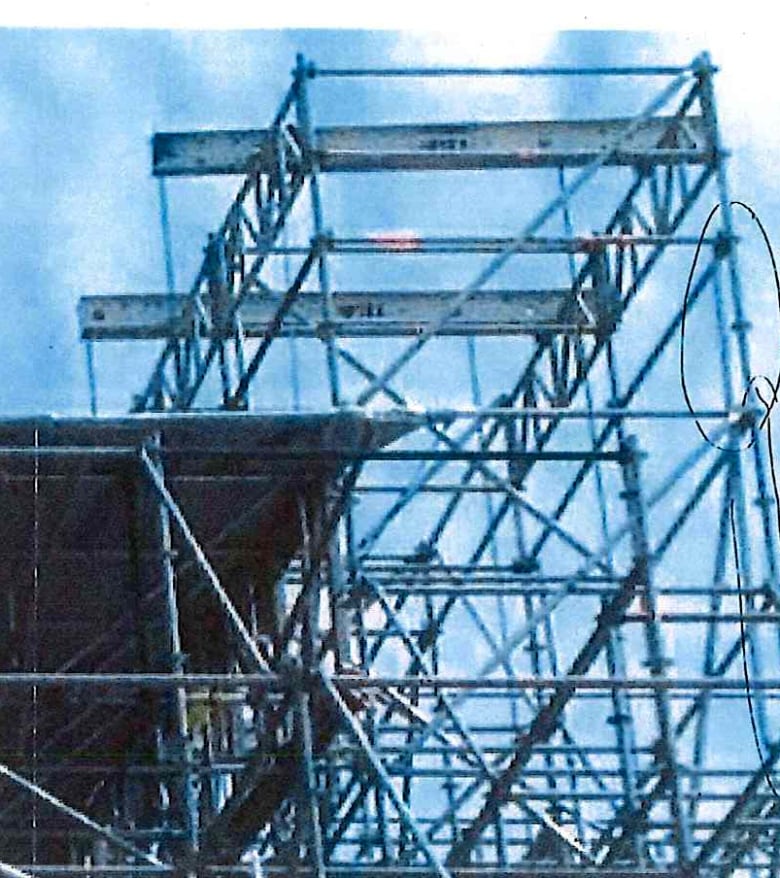 This picture of the stage tower assembly reveals support bracing missing from the upper tower. The circle on the right side was added by the coroner’s office. (Inquest exhibit)