John Tavares answered three questions about a resounding Toronto Maple Leafs’ victory before attention turned to what was already on everyone’s mind — the star centre’s return to Long Island.

Andreas Johnsson scored twice as part of Toronto’s four-goal outburst in a seven-minute stretch to open the second period Wednesday in the Leafs’ 6-2 dismantling of the Edmonton Oilers.

Mitch Marner added a goal and two assists, while Tavares, William Nylander and Patrick Marleau had two-point nights to provide the rest of the offence for Toronto (39-20-4).

“Every line’s playing, being hard to play against,” Tavares said. “It makes us tough to match up against.”

Frederik Andersen made 34 saves for the Leafs, who announced before the game Jake Gardiner is week to week with a sore back before fellow defenceman Travis Dermott suffered a left shoulder injury in the third period. He’s also listed as week to week.

Toronto scored 4 in the middle frame on the way to beating Edmonton 6-2 but lost Travis Dermott to a shoulder injury in the 3rd Period. 2:11​

Tavares spent nine seasons on Long Island, including six as captain, before bolting for the team he supported growing up in the suburbs west of Toronto in free agency on July 1.

“I fully embraced being an Islander,” Tavares said. “I loved it and I gave it everything I had.”

Fan reaction, however, has been visceral since his departure, and the No. 1 pick in 2009 is likely in for a nasty reception at Nassau Veterans Memorial Coliseum.

“I had every right to go through the process that I went through [in free agency],” Tavares continued. “I tried to be open and honest when I made my decision. I had no idea what I was going to do until I made my decision. People can take it any way they want.

“All I can do is control what I can control.”

Leafs head coach Mike Babcock, whose team crept back within a point of Boston for second in the Atlantic Division, suggested Thursday’s return is something Tavares needs to “put to bed.”

“The great thing about fans is they pay their money and get to say whatever they want,” Babcock said. “He’s a good man. He was good for their franchise, he’s great for our franchise.

“He made a decision to come home. I don’t know if anyone can fault you for that.” 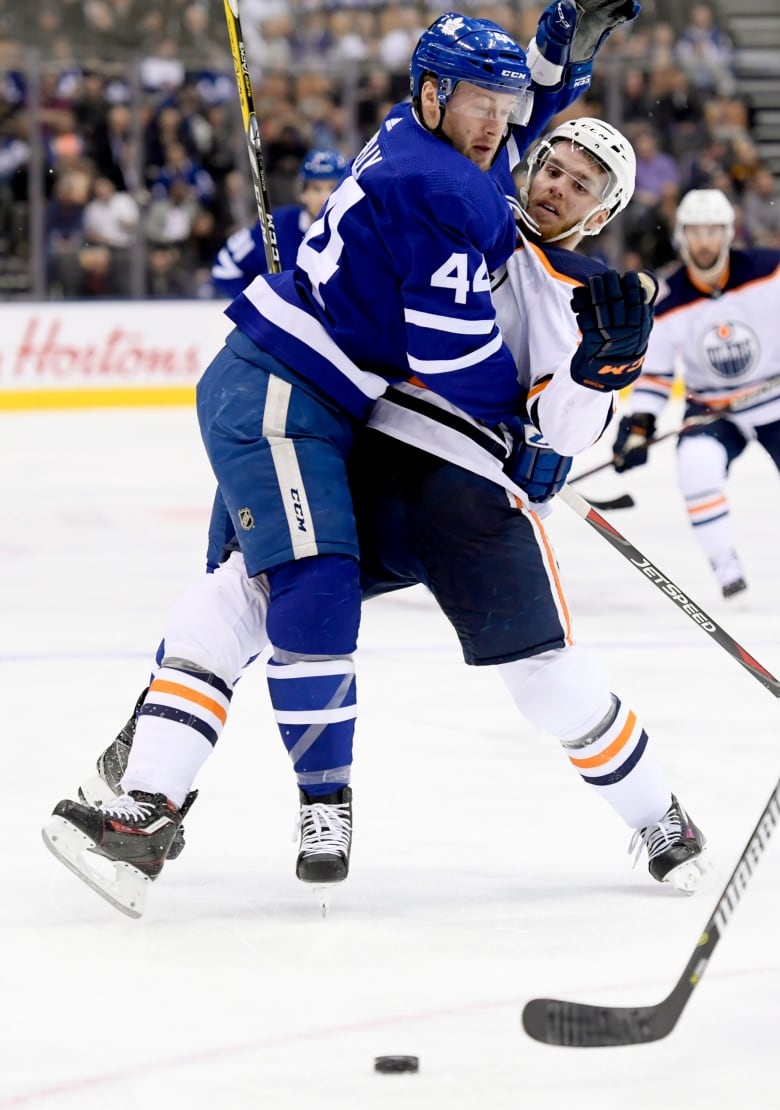 Toronto’s Morgan Rielly takes out Edmonton captain Connor McDavid during the Leafs’s win over the Oilers on Wednesday. (THE CANADIAN PRESS)

Leon Draisaitl and Ryan Nugent-Hopkins replied for Edmonton (26-30-7), which actually jumped out to a 1-0 lead and played a spirited opening 20 minutes Wednesday. Mikko Koskinen allowed four goals on 16 shots before getting the hook in favour of Anthony Stolarz, who finished with 18 saves. Darnell Nurse had two assists for the Oilers, whose fading hopes for a wild-card spot in the Western Conference took another hit.

Oilers superstar Connor McDavid, who grew up just north of Toronto, returned to the lineup after serving his two-game suspension for a hit to the head on Islanders defenceman Nick Leddy last week.

Edmonton head coach Ken Hitchcock said after the morning skate McDavid was “pissed off” about the suspension.

The entire roster probably had a similar feeling in the wake of Wednesday’s second period.

After Draisaitl and Marleau traded goals in the first, the floodgates opened for Toronto at 1:09 when Marner redirected a perfect feed from Zach Hyman for his 22nd, and second in the last 14 games.

The Leafs then went up 3-1 just 1:17 later when Johnsson finished off a pretty passing play with Kasperi Kapanen and Auston Matthews for his 18th. Nylander got in on the action on the power play at 4:50 when he ripped his fifth on Koskinen, who gave way to Stolarz.

Johnsson rounded out the seven-minute deluge at 8:09 on another man advantage when he beat Stolarz through the pads for his second of the night.

“The puck has been going in,” said Johnsson, who has four goals in his last four outings. “I’m going to keep working.” 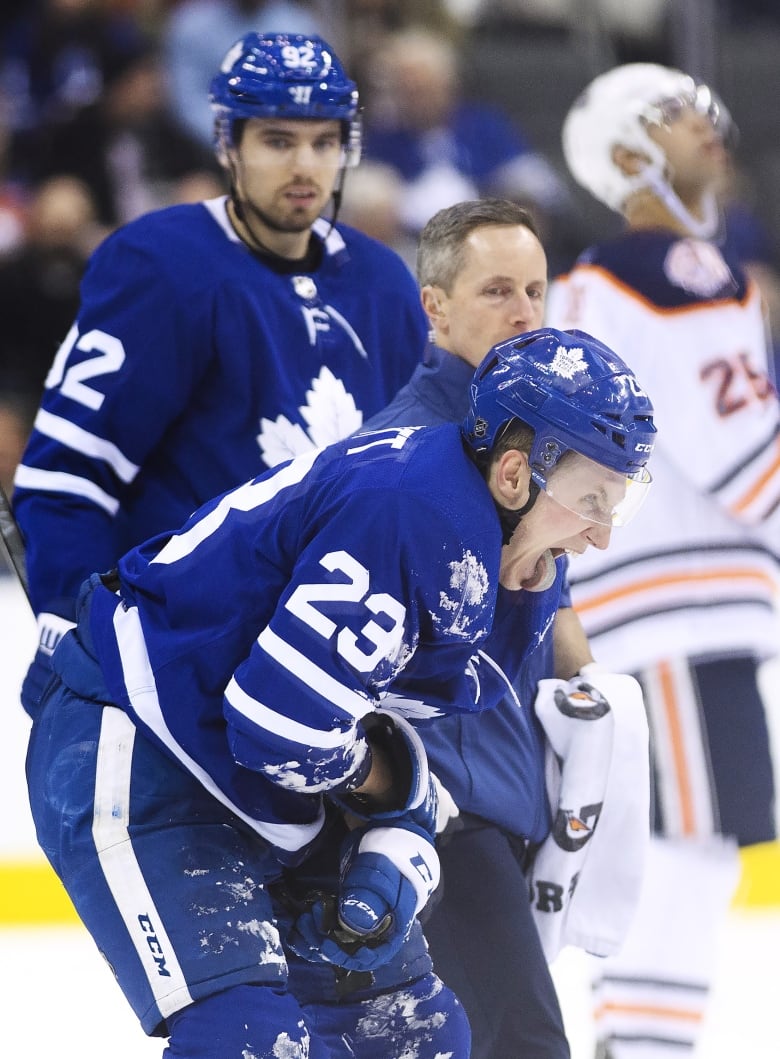 Toronto defenceman Travis Dermott leaves the ice in pain after taking a hit into the boards against the Edmonton Oilers on Wednesday. (Nathan Denette/Canadian Press)

The Leafs got a brief scare earlier in the second when Kapanen crashed awkwardly into the boards and went to the locker room after one shift, but the winger returned towards the end of the period.

“Hard to say what I’ll feel,” Tavares said of what’s to come Thursday. “I’m sure it’ll be an emotional evening.”