The 47-year-old has been revisiting his Washington haunts for what are being billed as a series of exclusive interviews with “Trump’s biggest power-players.”

The brief segments debuted on Wednesday with a behind-the-curtain look at U.S. Secretary of State Mike Pompeo, his wife Susan and their dog Sherman.

The revelations were in keeping with the syndicated program’s gossipy tone — the pair miss Kansas, love the Oscars, and America’s top diplomat has a playlist filled with AC/DC, Queen and Toby Keith. 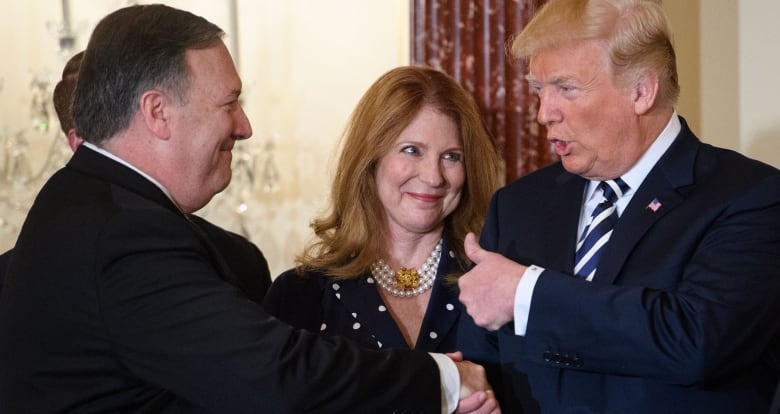 U.S. President Donald Trump gives the thumbs-up to Secretary of State Mike Pompeo as Pompeo’s wife Susan looks on during his ceremonial swearing-in at the State Department on May 2, 2018, in Washington. (Mandel Ngan/AFP/Getty Images)

“What do the kids think of having a famous mom?” Spicer probed.

And this evening, current White House spokesperson Sarah Sanders and her husband Bryan will have their softball session.

Serving as a presidential spokesman has traditionally been a golden ticket in the United States.

George Stephanopoulos parlayed his experience handling the press and advising Bill Clinton into a career with ABC News, where he now hosts both This Week and Good Morning America, and serves as the network’s chief anchor, at a reported salary of $15 million US to $17 million a year.

But Spicer, who worked on Trump’s campaign and then served six tumultuous months at the White House — during which his was mercilessly lampooned by Melissa McCarthy on Saturday Night Live —  has had a rockier transition. 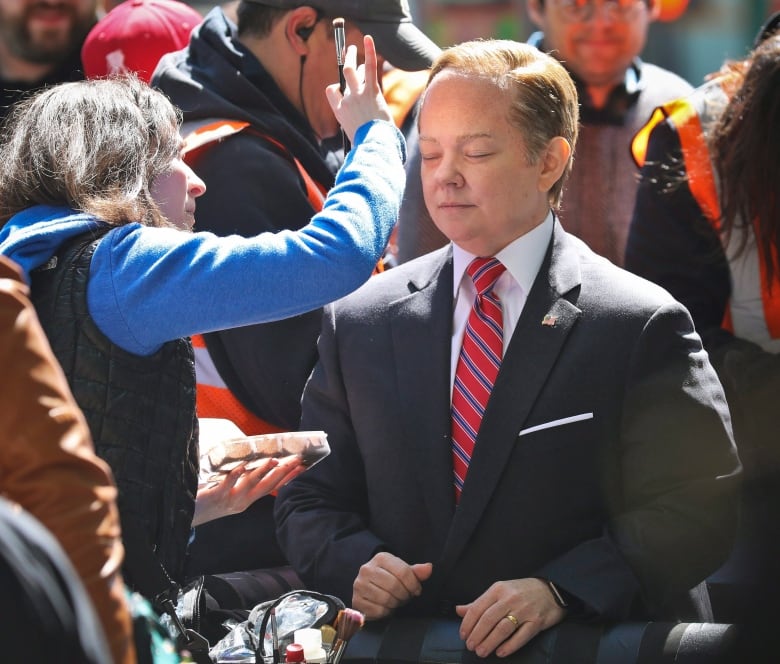 Actress Melissa McCarthy, dressed as White House spokesman Sean Spicer, gets her makeup touched up while filming a skit for Saturday Night Live on May 12, 2017, in New York. (The Associated Press)

His sunny retelling of his time with Trump, The Briefing: Politics, the Press, and the President, was savaged by critics and his launch events drew protestors.

The memoir did briefly make it onto the New York Times and Wall St. Journal best-seller lists, but quickly lost momentum. It currently ranks as the 130,757th best-selling book on Amazon.com, although it is number 261 with a bullet in the Russian and Former Soviet Union sub-category.

(Spicer is flogging personalized and autographed copies of the book on his website for just a couple of dollars more than its $28.99 list price.)

Spicer signs a copy of his book ‘The Briefing: Politics, The Press, and The President’ at a launch event in Washington in July 2018. (Al Drago/Getty Images)

He had a political podcast with a Fox News contributor, Katie Pavlich, but the last new episode was posted in December.

And a talk show proposal, Sean Spicer’s Common Ground, which would see him interview famous people in informal settings, has been floating around Hollywood since last summer, but has yet to catch on.

Other Trump veterans haven’t had the same struggle.

Josh Raffel, who served as deputy communications director, is now the vice-president of corporate communications for Juul, a much-hyped e-cigarette maker.

Hope Hicks, who channeled Trump during the campaign and then advised him in Washington, is now the head of PR for Fox, solidifying the lend-lease arrangement between Rupert Murdoch’s empire and the White House. 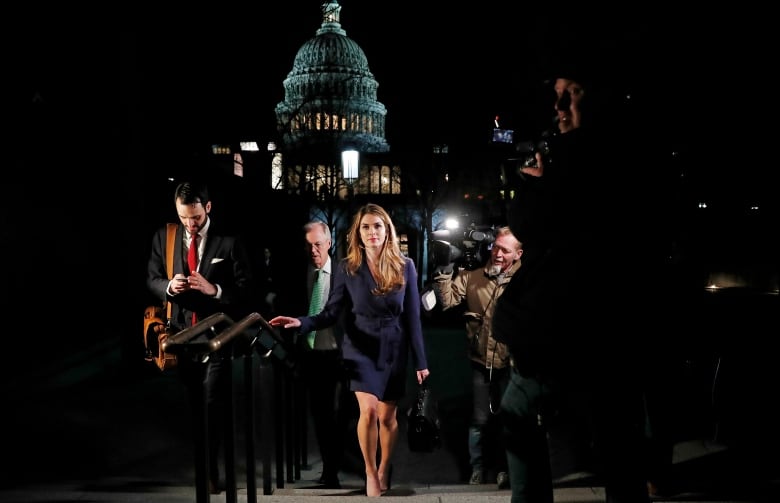 Although Spicer is arguably doing better than Omarosa Manigault Newman, whose career arc has taken her from The Apprentice to the Oval Office and now back to reality television, most recently as a guest host on Celebrity Big Brother 2.

Spicer has expressed hopes that his open-ended arrangement with Extra will help spark interest in his talk show pitch.

The early returns aren’t all that promising, however.

As of early afternoon on Friday, Spicer’s interviews with Pompeo and Conway had a combined viewership of just over 3,000 people on Extra‘s YouTube channel.

The Royal Fascinator, Janet Davison’s incisive look at the Royal Family, is back after a hiatus. It goes behind the headlines and tabloid gossip to help you understand the politics of the House of Windsor today. Sign up for The Royal Fascinator and have it delivered to your inbox every other Friday.

Here in Los Angeles, there are a lot of journalists — hundreds at major events like the Oscars — jockeying for access to the stars. Trying to get a fresh, inside story. Snag a behind-the-scenes anecdote. Or score an “Instagrammable” moment, however brief.

I never realized until I moved here how many media representatives are often flown out to L.A. at a studio’s expense to cover interviews and red carpets. At press events for big films or award shows, I’m often sandwiched between fan bloggers and celeb-friendly online channels.

The 2019 Oscars will be held Sunday night. (Danny Moloshok/Invision/Associated Press)

One reporter’s sole job at an event I recently attended was to simply capture Instagram “Boomerang” clips of the outfit of every single star who would stop for photos.

All this to say, it seems many celebrities are becoming used to answering doting questions, rather than more difficult ones, because the lines between objective and sponsored reporting have become significantly blurred in Hollywood.

Take Bohemian Rhapsody star Rami Malek, for example. When I asked him about his film’s Oscar campaign ahead of Sunday’s awards show, given the misconduct allegations against its credited director Bryan Singer, he couldn’t move away fast enough.

In the era of #metoo and the swirling controversy around the film, it was a legitimate question. But he seemed reluctant to deviate from a preset message track and (politely) walked away mid-sentence. 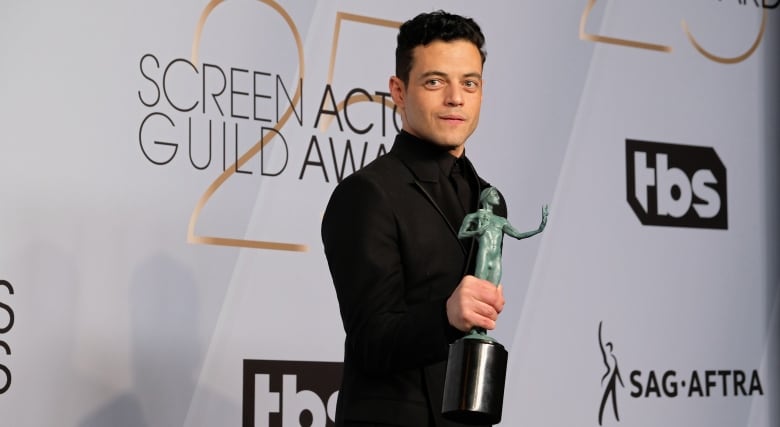 Rami Malek, winner of Outstanding Performance by a Male Actor in a Leading Role for ‘Bohemian Rhapsody,’ in the press room at the Screen Actors Guild Awards in Los Angeles. ( Sarah Morris/Getty Images)

I could see the relief on Malek’s face as he was handed a softer question by the reporter next to me.

“How heavy is your award?”

The reporter laughed, and when Malek handed the statuette over, proceeded to do bicep curls with it.

Still, not everyone avoids the tough questions. Tonight on The National, we go behind the scenes to show you how the long road to Oscar victory can be costly and tumultuous.

And tonight on The National’s Pop Panel, the Oscars are in the middle of an identity crisis. The Academy’s seeming desperation not to run too long and to get some decent ratings has led it to make unpopular decisions, and then backtrack under pressure.

What do the Academy Awards mean for movie making in 2019? Who are they trying to please? And, for those of you taking part in Oscar office pools, who is going to win big?

The Pop Panel is back for a special Oscars 2019 edition this evening, featuring Stephen Marche, (@StephenMarche), Anthony Oliveira (@meakoopa), and Ishani Nath (@ishaninath), along with your host Andrew Chang. Watch it on CBC Television and streamed online.

A song to build a pipeline

A bluegrass band in Alberta has faith that music can turn the province’s economy around, reporter Nick Purdon writes.

Albertans Joe Gore and Gerry Madigan believe in the power of music.

And I mean they really believe.

Lots of Albertans think getting the Trans Mountain pipeline expansion project built will return their province to prosperity. What’s unique about Gore and Madigan is that they have a plan to make that happen.

They’ve written a song called Build that Pipeline that has become a bit of an anthem across Alberta.

Full disclosure — even as I write this the song is stuck in my head.

Alberta’s Spitzee Post Band hopes their song ‘Build that Pipeline’ will help get the Trans Mountain Pipeline expansion project built, and return their province to prosperity. 0:44

“A song can make a difference,” says the 72-year old Madigan, the banjo player in the Spitzee Post band. “A song can change the world, as it has done many times.

“It really is a crisis we are facing,” he adds. “If we don’t do something to rectify this, we are going to hit a massive recession the likes of which we have never seen before.”

Madigan wrote the lyrics to the song, and he admits they aren’t complicated. 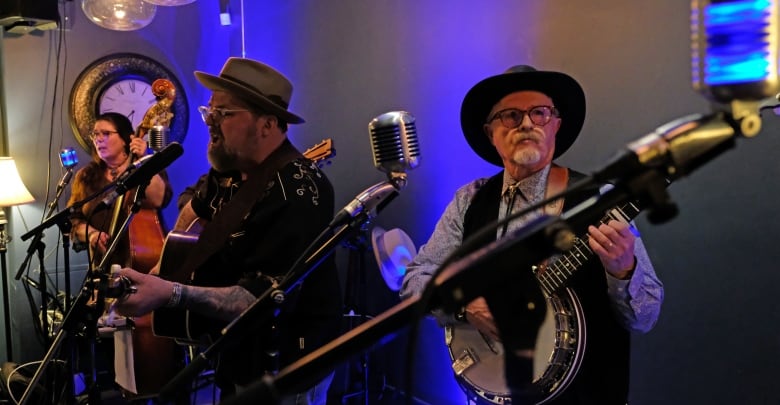 Beyond the popular belief that music really can change the world, the reason members of the Spitzee Post band think they can make a difference with a song is they’ve done it before.

In 2013 when the floods ravaged southern Alberta, they found themselves in the middle of it in the town of High River.

“We were digging each other out. The whole town was gone. It was destroyed,” Gore says.

The Spitzee Post Bar was one of the few buildings untouched.

“I went down there to tell the people that the music is still here,” says Gore. “The town is gone, but the music is here — and people would come and listen and help each other.”

Gore and Madigan say with their province mired in an economic downturn, the people of Alberta need their help again.

Helping out after a tragedy. 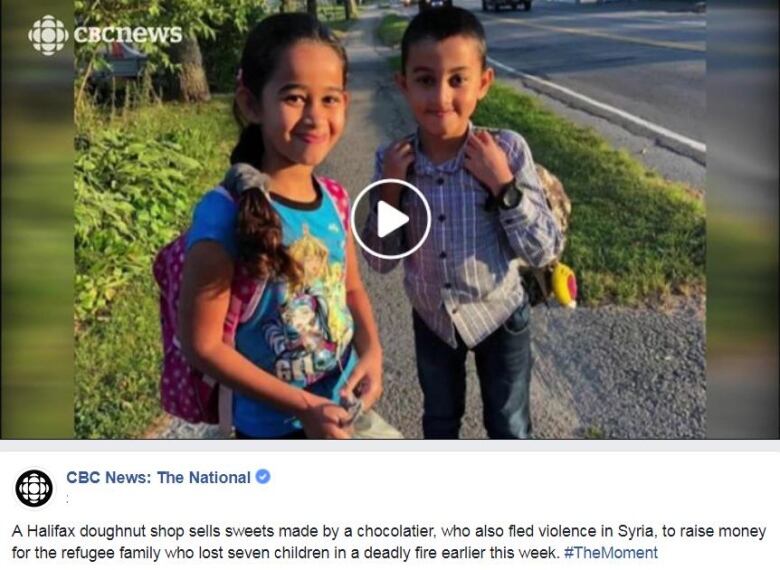 “After completing the Reconsideration hearing and having regard to all relevant considerations, the Board is of the view that the Project is and will be required by the present and future public convenience and necessity, and is in the Canadian public interest.”

– The National Energy Board reiterates its support for the twinning of the TransMountain pipeline, in a report released this afternoon.

Three months after losing a leg — and nearly his life — to necrotizing fasciitis, Lucien Bouchard makes an emotional return to the House of Commons. The welcome was warm, and the sentiments heartfelt. Prime Minister Jean Chrétien pays tribute, and Reform leader Preston Manning marks the occasion with his first (sort of) French-only address to Parliament. “I’m back. I’m really back,” Bouchard tells reporters, 11 months before he departed Ottawa to become premier of Quebec.

Almost three months after a near fatal brush with flesh-eating disease, the leader of the Bloc Québécois is back on the job in the House of Commons. 2:51