Dylan Tootoosis had his first sip of coffee on the rez at 11 years old, when his grandfather gave him a shot of instant coffee when his grandmother wasn’t looking.

That first sip is still fresh in his mind and he has turned his love for coffee into a business.

“It’s been a dream for a while to start it. It took a long time,” said Tootoosis, who is a proud descendant of Chief Poundmaker and spent a lot of his childhood with his grandparents in Poundmaker Cree Nation in Saskatchewan.

Now Tootoosis owns Cree Coffee Company based out of Maskwacis, Alta. The company is named after his youngest daughter and his people.

He says he buys his supply of organic beans from Indigenous Peoples in South America, roasts them in Maskwacis and sells them online and on the powwow trail.

“[In 2001] I started off as a barista in downtown Calgary, learning the art of espresso making, cappuccinos, americanos and all the other lattes,” he said. 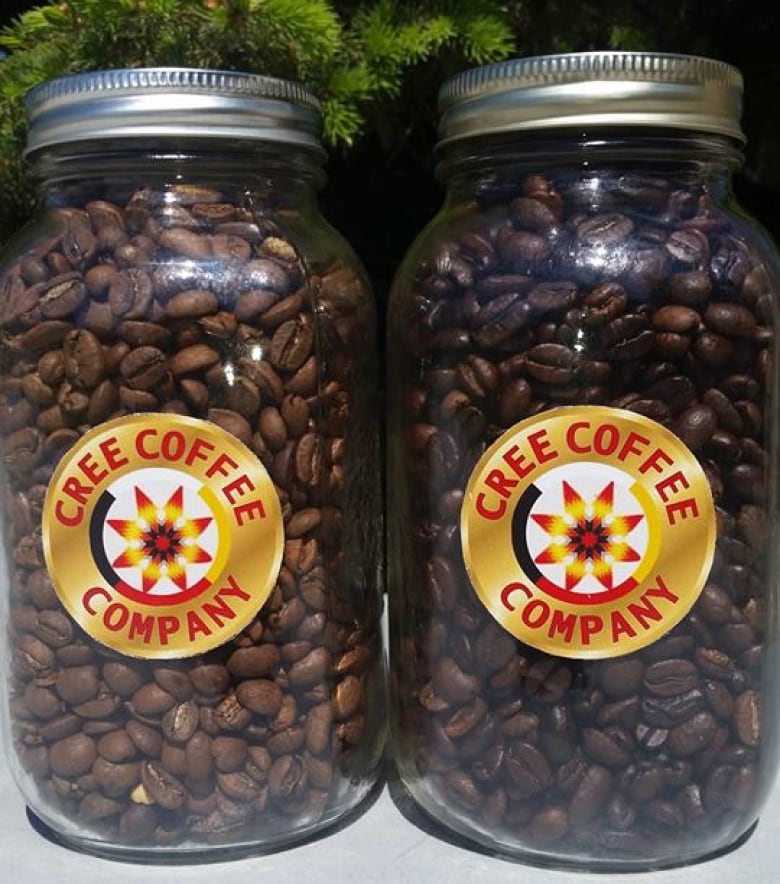 Tootoosis sells four different blends from South American beans, and packages them in mason jars. Each jar varies in price from $15-$20. (Submitted by Dylan Tootoosis)

When the company he was working for closed down, he applied at every other coffee joint in Calgary, eventually landing a delivery and sales associate job with Van Houtte, a Montreal-based coffee company.

He left Van Houtte in 2010 and said wanted to start his own company.

“In the beginning it was really far-fetched, like all the logistics and you know. It was very costly,” said Tootoosis.

“I approached every coffee company in Calgary and asked to see if I could get a rebrand. I got turned down by every single company.”

He said his business pitches were getting turned down because of outstanding student loans. Things changed for him when he met Jorge Masso, an Indigenous South American who had moved to Calgary and showed him the ropes of the coffee industry.

“He mentored me, trained me and showed me how to roast, how to run a company,” said Tootoosis.

After working with Masso, Tootoosis saved up his money, and in 2015, he finally got his small business off the ground.

Selling coffee on the powwow trail

Over the years, he ended up struggling with an alcohol addiction but is now going on five years of sobriety. He thanks his love of coffee shops and lattes for getting him away from the vice.

“It’s one of the one of the main reasons why I do what I do,” said Tootoosis.

“I suffered with a bottle for about 15 years… and what helped me out, helped me sober up, was coffee culture.”

Thanks to his grandparents, Tootoosis was raised on the powwow trail and became a chicken dancer. Powwow is now also where most of his sales come from.

Tootoosis travels to powwows across western Canada with a vendor and concession stand. He sells his coffee in mason jars, with four blends, each blend representing a different part of the medicine wheel.

The powwow trail is where Melissa Budesheim, owner of Native Delights First Nations Cuisine in Edmonton, was first introduced to the brand.

“I was drinking it long before I was part of Native Delights, going to powwows… I loved it. I always have to look for Cree Coffee,” said Budesheim.

Budesheim has been carrying the coffee for two months and said sales have been “off the wall.”

Tootoosis said he doesn’t have dreams of becoming a millionaire off of his coffee brand, but is he hoping to inspire more entrepreneurs and take it the next level.

“I would like to show my people organic coffee without any additives, preservatives, just all-natural clean coffee.”