A new dollar coin designed to commemorate 50 years of homosexual rights has sparked a dual backlash — from both members of Canada’s LGBT community and from a social conservative group.

The loonie, to be launched April 23 at an invitation-only event in Toronto, will feature a stylized depiction of two overlapping human faces within a large circle, the dates 1969 and 2019, and the word “equality” in English and French. The Royal Canadian Mint is keeping tight-lipped on details until next week’s official reveal.

York University historian Tom Hooper said the coin commemorates a “myth,” since the sweeping changes to the Criminal Code introduced in 1969 — which decriminalized sexual activity between men over the age of 21 in a private setting — were modest, and police and courts continued to criminalize same-sex relations afterward.

“I feel like they’re putting this myth onto a coin. They’re stamping this coin with 1969 and right next to it ‘equality’ and there was nothing in 1969 to do with equality,” said Hooper, who studies the history of LGBT rights in Canada.

“Even the people who supported the Criminal Code reforms were arguing that we were a mental disease. So this was not about equality.”

In 1967, after introducing the package of Criminal Code reforms that would pass a heated House of Commons vote two years later, then justice minister Pierre Trudeau famously stated that “there’s no place for the state in the bedrooms of the nation.”

But Hooper insisted that legal persecution of homosexual acts persisted through certain provisions in the Code — such as gross indecency — and pointed to the urban police raids of gay bath houses that continued into the 1980s.

“I think the story of decriminalization and the myth, as I’m calling it, certainly benefits the Liberal Party and it benefits anybody with the last name Trudeau,” he said, calling the coin a “big mistake.”

Hooper is part of the Anti-69 Network, a group of activists and academics planning to hold a media event just before the new loonie is unveiled next week. The event will feature speakers arguing that Canada did not decriminalize homosexuality in 1969 and that LGBT Canadians still faced official persecution in the decades that followed: the criminalization of non-disclosure of HIV-positive status, a ban on blood donations from gay and lesbian Canadians and oppressive policing tactics.

Not every LGBT activist agrees. Helen Kennedy is the executive director of the advocacy group Egale Canada, which was consulted on the new coin. She said 1969 was a “significant turning point” for Canada and the mint’s official commemoration is a “big deal.”

“Let’s take it as a moment in time to acknowledge a recognition and to acknowledge that the current government wants to effect change for LGBT people in Canada,” she said.

A Jan. 15, 2019 memorandum prepared for Prime Minister Justin Trudeau released under Access to Information outlines a series of his government’s “accomplishments” on LGBT issues, including a formal apology in 2017 for historical injustices, investments in community projects and international assistance for LGBT projects abroad. 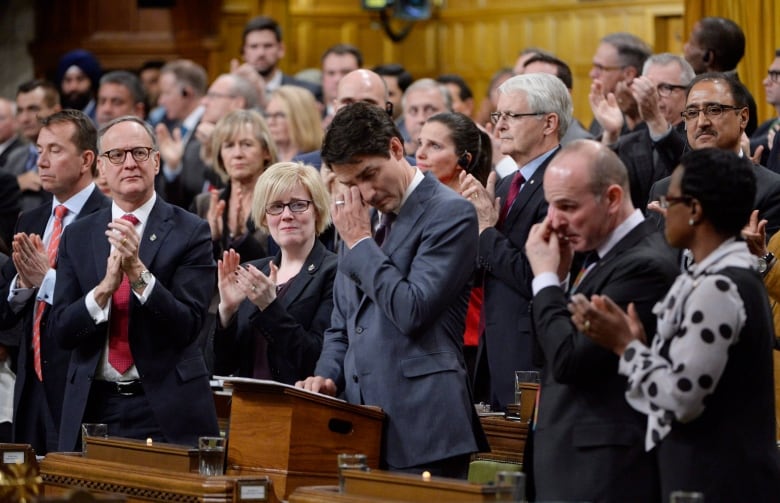 Prime Minister Justin Trudeau wipes his eye while he is applauded as he delivers a formal apology to LGBT people in Canada in the House of Commons in Ottawa, Tuesday, Nov.28, 2017. (Adrian Wyld/The Canadian Press)

David Cooke of the social conservative group Citizen Go Canada, meanwhile, accuses the Mint of trying to “politicize” Canada’s coinage in order to promote what he calls the prime minister’s “gay agenda.” He compared LGBT issues to other topics that have proved to be politically divisive — abortion and divorce — and that he said should not be celebrated by the federal government.

“What we see here happening with Mr. Trudeau is, he’s going really too far. He’s not only going back into the debate, he’s taking a side,” he said.

“He’s saying we as a country, and we as Canadian citizens, are not only saying we approve of homosexual behaviour and lifestyle, but we want to have every citizen have it on their coinage. It’s going to be celebrated, going to be promoted and many Canadians find that very disturbing and even offensive.”

Last week, Cooke and about a dozen others protested outside the Mint and delivered an online petition opposing the new coin.

Mint spokesman Alex Reeves said the coin recognizes 50 years of progress for LGBT Canadians since Parliament initiated the decriminalization of homosexuality, and that the use of the word ‘equality’ is meant as “an expression of the goal that LGBT Canadians and their allies continue to pursue.”

About three million of the coins will be put into circulation. Cooke said if he gets one of the coins in his change, he’ll trade it for quarters.