In the immediate aftermath of Friday’s shootings at two mosques in Christchurch, Ardern labelled the attack as terrorism and said New Zealand’s gun laws would change.

“On 15 March our history changed forever. Now, our laws will too,” the prime minister said. “We are announcing action today on behalf of all New Zealanders to strengthen our gun laws and make our country a safer place.”

“All semi-automatic weapons used during the terrorist attack on Friday 15 March will be banned,” she said at a news conference.

The changes will require legislation, she said, which is being drafted now and will be introduced quickly. Ardern said she expects the new laws to be in place by April 11 and a buy-back scheme will be established for banned weapons.

In the interim, an order in council was put in place to limit trade in the weapons that will be banned.

All military style semi-automatics (MSSA) and assault rifles would be banned, along with parts used to convert weapons into MSSAs and all high-capacity magazines.

Under existing New Zealand gun laws, A-category weapons can be semi-automatic but limited to seven shots. Live-streamed video of a gunman in one of the mosques showed a semi-automatic weapon with a large magazine.

I strongly believe that the vast majority of legitimate gun owners in New Zealand will understand that these moves are in the national interest.– New Zealand Prime Minister Jacinda Ardern

Australia banned semi-automatic weapons and launched a gun buy-back after the Port Arthur massacre in 1996 in which 35 people were gunned down.

Ardern said that similar to Australia, the new gun laws will allow for strictly enforced exemptions for farmers to conduct pest control and animal welfare.

“I strongly believe that the vast majority of legitimate gun owners in New Zealand will understand that these moves are in the national interest, and will take these changes in their stride.”

New Zealand, a country of less than 5 million people, has an estimated 1.2-1.5 million firearms, around 13,500 of them MSSA type weapons.

Most farmers in the Pacific country own guns, which they use for killing pests such as possums and rabbits, and for putting down injured stock.

Recreational hunting of deer, pigs and goats is popular for sport and food, while gun clubs and shooting ranges dot the country.

That has created a powerful lobby which has thwarted previously attempts to tighten gun laws after other mass shootings in New Zealand and overseas.

Federated Farmers, which represent thousands of farmers, said it supported the change.

“This will not be popular among some of our members but…we believe this is the only practicable solution,” Federated Farmers Rural Security spokesman Miles Anderson said in a statement.

‘I don’t really need it’

The changes exclude two general classes of firearms which are commonly used for hunting, pest control, stock management on farms, and duck shooting.

“I have a military style weapon. But to be fair, I don’t really use it, I don’t really need it,” said Noel Womersley, who slaughters cattle for small farmers around Christchurch.

“So I’m quite happy to hand mine over, to be fair.”

Ardern said the next tranche of reforms will cover the firearm registry and licensing.

On Thursday, the bullet-riddled Al Noor mosque in Christchurch was being repaired, painted and cleaned ahead of Friday prayers, as grieving families buried more victims.

Ardern has announced that Friday’s call to prayers for Muslims will be broadcast nationally and there will be a two minute silence.

Armed police have been guarding mosques around New Zealand since the attacks.

“We will have a heightened presence tomorrow in order to provide reassurance to people attending the Friday call for prayers,” police said in a statement on Thursday. 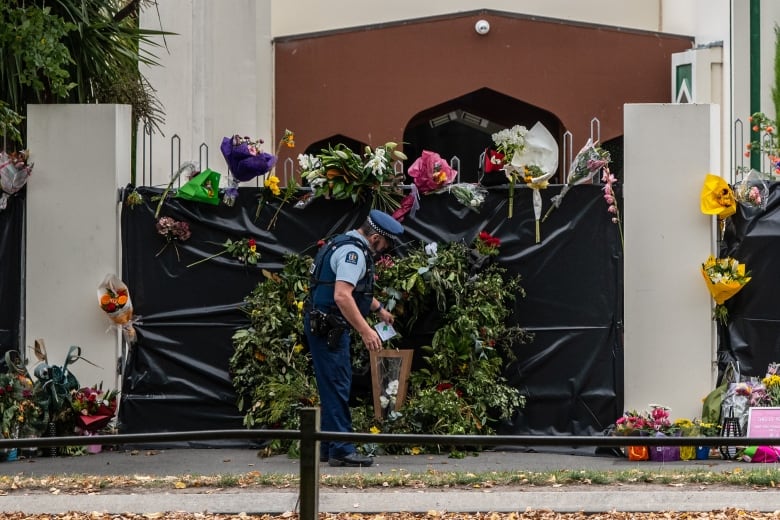 A policeman places flowers on the gates of Al Noor mosque in Christchurch, New Zealand. Fifty people were killed, and dozens are still injured in hospital after a gunman opened fire on two Christchurch mosques last Friday. (Carl Court/Getty Images)

Both mosques attacked, the Al Noor and nearby Linwood mosque, plan to be reopened. Thousands of worshippers are expected at the Al Noor mosque, where the majority of victims died.

The first victims were buried on Wednesday and burials continued on Thursday, with the funeral of a school boy.

A mass burial is expected to be held on Friday. Body washing will go on through the day and night to have the dead ready for burial, said one person involved in the process.

Police have now identified all 50 victims.