U.S. President Donald Trump and North Korea’s Kim Jong-un have failed to reach an agreement at their second summit in Vietnam, but talks between the two nations will continue in the future.

White House press secretary Sarah Sanders said the two leaders discussed denuclearization of the Korean Peninsula and that “no agreement was reached at this time, but their respective teams look forward to meeting in the future.”

Still, Sanders described the meetings between Trump and Kim as “very good and constructive.”

Earlier, Trump deliberately ratcheted down some of the pressure on Pyongyang, declaring he was in “no rush. We just want to do the right deal.”

But Kim, when asked about denuclearization during an unprecedented question-and-answer session with journalists, said “If I’m not willing to do that I won’t be here right now.” The leaders seemed to find a point of agreement moments later when Kim was asked if the U.S. may open a liaison office in North Korea. Trump declared it “not a bad idea” and Kim called it “welcomable.” Such an office would mark the first U.S. presence in North Korea.

Over a series of meetings, the two men offered hopeful words at a summit focused on curbing Pyongyang’s pursuit of nuclear weapons, a problem that has bedeviled generations of leaders.

The summit was held against a backdrop of swirling questions: What was Kim really willing to give up? What may Trump demand in the face of rising domestic turmoil? And could the meeting yield far more concrete results than the leaders’ first summit, a meeting in Singapore less than a year ago that was long on dramatic imagery but short on tangible results?

In a sharp break from his rhetoric a year ago, when he painted the threat from Pyongyang as so grave that “fire and fury” may need to be rained down on North Korea, Trump made clear he was willing to accept a slower timetable for denuclearization. He made little mention of denuclearization in his opening remarks, ramping down expectations further by saying “I can’t speak necessarily for today but … over a period of time I know we’re going to have a fantastic success with respect to Chairman Kim and North Korea.”

Kim fielded questions from Western journalists for likely the first time, with the reporters receiving some coaching from the president, who implored, “And don’t raise your voice, please. This isn’t like dealing with Trump.” The North Korean leader struck a largely hopeful note, saying “I believe by intuition that good results will be produced.”

After a reporter asked Kim if they were discussing human rights, Trump interjected to say they were “discussing everything” though he did not specifically address the issue.

Earlier, accompanied only by translators, the unlikely pair — a 72-year-old brash billionaire and a 35-year-old reclusive autocrat — displayed a familiarity with one another as they began the day’s negotiations. After a 40-minute private meeting, the leaders went for a stroll on the Hotel Metropole’s lush grounds, chatting as they walked by a swimming pool before being joined by aides to continue talks. 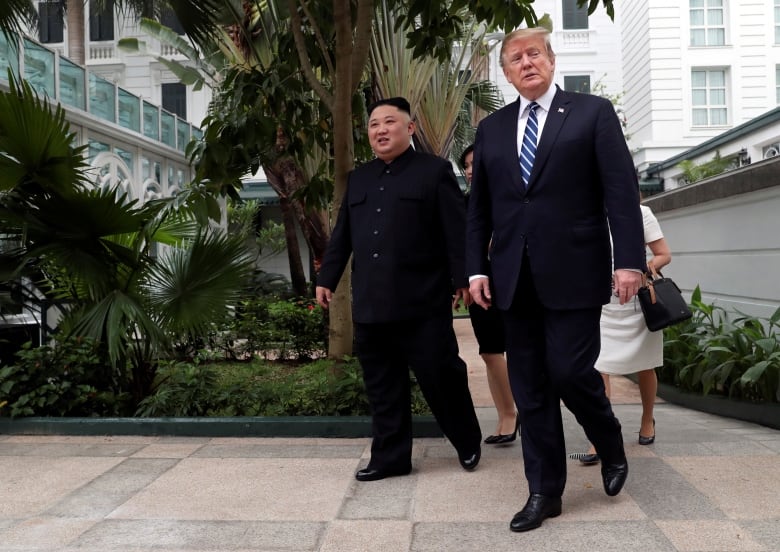 The two leaders walk in the garden of the Metropole hotel during the second North Korea-U.S. summit in Hanoi. (Leah Millis/Reuters)

“The relationship is just very strong and when you have a good relationship a lot of good things happen,” said Trump. He added that “a lot of great ideas were being thrown about” at their opulent dinner the night before. He offered no specifics.

“I believe that starting from yesterday, the whole world is looking at this spot right now,” Kim said via his translator. “I’m sure that all of them will be watching the moment that we are sitting together side by side as if they are watching a fantasy movie.”

Ahead of the summit, some had speculated that possible outcomes could include a peace declaration for the Korean War that the North could use to eventually push for the reduction of U.S. troops in South Korea, or sanctions relief that could allow Pyongyang to pursue lucrative economic projects with the South.

Skeptics said such agreements would leave in place a significant portion of North Korea’s nuclear-tipped missiles while robbing the United States of its negotiating leverage going forward.

WATCH | North Korea vs. South Korea: Why has the peninsula been divided?

Hours before he sat down again with Kim, Trump’s former personal attorney, Michael Cohen, delivered explosive congressional testimony claiming the president is a “con man” who lied about his business interests with Russia.

The turmoil in Washington has escalated concerns that Trump, eager for an agreement, would give Kim too much and get too little in return. The leaders’ first meeting in June was heavy with historic pageantry but light on any enforceable agreements for North Korea to give up its nuclear arsenal.

Trump, unable to ignore the drama playing out thousands of miles away, tweeted that Cohen “did bad things unrelated to Trump” and “is lying in order to reduce his prison time.” Cohen has been sentenced to three years in prison for lying to Congress.

Some of Trump’s previous overseas trips have also been marred by developments at home, including special counsel Robert Mueller’s indictments last July of Russian intelligence officers who interfered on Trump’s behalf in the 2016 election, charges that were filed days before the president and Russia’s Vladimir Putin met in Helsinki.

Kim, meanwhile, has emerged with confidence on the world stage over the last year, repeatedly stepping out diplomatically with South Korean, Chinese and U.S. leaders.

But many experts worry that the other, darker side of Kim’s leadership is being brushed aside in the rush to address the North’s nuclear weapons program: the charges of massive human rights abuses; the prison camps filled with dissidents; a near complete absence of media, religious and speech freedoms; the famine in the 1990s that killed hundreds of thousands; and the executions of a slew of government and military officials, including his uncle and the alleged assassination order of his half-brother in a Malaysian airport.

North Korea is a fiercely proud nation that has built a nuclear program despite decades of some of the world’s harshest sanctions, but extreme poverty and political repression has caused tens of thousands to flee, mostly to South Korea. There are doubts that Kim will give away the program without getting something substantial in return from the U.S.

After their first summit, where Trump and Kim signed a joint statement agreeing to work toward a denuclearized Korean Peninsula, the president prematurely declared victory, tweeting that “There is no longer a Nuclear Threat from North Korea.” The facts did not support that claim.

The Korean conflict ended in 1953 with an armistice, essentially a cease-fire signed by North Korea, China and the 17-nation, U.S.-led United Nations Command. A peace declaration would amount to a political statement, ostensibly teeing up talks for a formal peace treaty that would involve other nations.

North and South Korea also want U.S. sanctions dialled back so they can resurrect two major symbols of rapprochement that provided $150 million US a year to the impoverished North by some estimates: a jointly run factory park in the North Korean border city of Kaesong and South Korean tours to the North’s scenic Diamond Mountain resort.