Oilers coach Ken Hitchcock says he wasn’t thanking his lucky stars when the Buffalo Sabres muffed two chances to score into an open net in the final eight minutes of Edmonton’s 4-3 win on Monday night.

Instead, Hitchcock began believing the bad bounces the Oilers experienced during a 1-8-2 slump were finally evening out.

And yes, that included hanging on for the win despite Oilers star Connor McDavid missing an open net in the final minute of a game Edmonton overcame a 3-1 deficit.

“I’m just proud of the way the guys responded,” Hitchcock said of a team that’s won three straight in closing out a five-game trip. “We didn’t put our second foot on the bus. We dug in and played and competed, and it’s a good sign for the team for now.”

WATCH | Oilers rally in 2nd to take down Sabres:

Edmonton scored 3 times in the middle frame to beat Buffalo 4-3 for their 3rd straight win. 1:28

The Oilers scored three times over the final 3:31 of the second period, with Kyle Brodziak credited with the go-ahead goal with five seconds remaining. He was driving to the front of the net, when Adam Larsson’s shot from the left point deflected in off his skate.

Leon Draisaitl scored his team-leading 41st and added an assist, to extend his point streak to 11 games in which he had combined for nine goals and eight assists. McDavid had two assists, while Darnell Nurse and Zack Kassian also scored for Edmonton.

Mikko Koskinen stopped 35 shots, including the final 27 after allowing Jack Eichel to score Buffalo’s third goal with 2:36 left in the first period, and earned two fortunate breaks to improve to 5-1-2 in his past eight.

Buffalo’s Jeff Skinner missed an open right side by directing a shot off the post with 7:34 left. Then with 3:40 remaining, Jason Pominville directed in Brandon Montour’s pass through the crease, only to have his follow through hit the puck and sweep it back out before it crossed the goal line.

“I have no idea,” Pominville said of how the puck didn’t go in.

“I can probably take 100 shots from that area and it might never happen, but it happened tonight,” he added. “It’s a tough feeling when you see it going in, and then all of a sudden coming out.”

Jason Pominville accidentally stops himself from getting the game-tying goal vs. Edmonton <a href=”https://t.co/cg9DMT5P7p”>pic.twitter.com/cg9DMT5P7p</a>

Eichel scored twice and Casey Mittelstadt also scored for the slumping Sabres. Buffalo dropped to 2-7-1 in its past 10, and is 13-22-6 since a franchise-record-matching 10-game win streak in November.

Linus Ullmark was yanked at the end of the second period after allowing four goals on 20 shots, and three on the final four shots he faced. Carter Hutton took over and stopped all seven shots he faced.

While Buffalo continues its slide out of the playoff picture with a little over a month left, the Oilers continue making a late push.

Edmonton (29-30-7) has 65 points and moved out of a three-way tie for 11th, inching to within six points of eighth-place Minnesota.

“A lot of people are against us, we know that. But we’re not going to stop until it’s over or we’re in,” Draisaitl said. “Another gutsy effort. Really good road trip from the whole group. We’ve got to keep this up.” 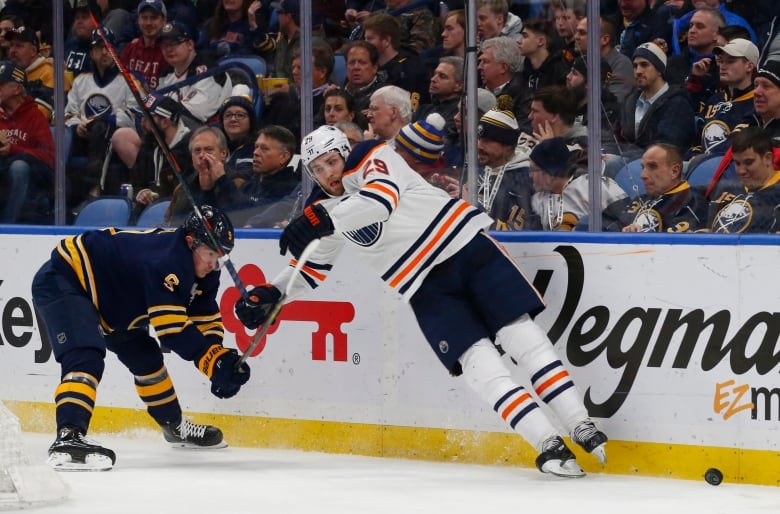 Draisaitl even managed to giggle when reminded of McDavid’s shot from the Sabres blue line missing the wide open net and hitting off the outside of the right post with under a minute left.

The Oilers not only picked up their captain’s miscue but also that of Draisaitl, who was penalized for interference a few seconds later.

“That’s what a team does. We stick up for each other,” he said. “We have to make sure we keep pushing.”

The Sabres appeared to take control when Eichel eluded defenceman Kris Russell, who dropped his stick, and scored by driving to the net to put Buffalo up 3-1 with 2:36 left.

“I thought we showed some good compete and resiliency in the third period,” Eichel said. “But at the end of the day, like I’ve said this year, it’s not enough for us.”