Flood-weary residents will be tested again this weekend as water levels rise on the Ottawa River.

Rains that drenched the region on Thursday and Friday are working their way into the river over the course of the weekend, raising the water close to levels they hit last week at the height of the floods.

The City of Gatineau reported Saturday morning that water levels in the area rose by an average of eight centimetres in the last 24 hours. The Ottawa River rose five centimetres in the Aylmer and Britannia areas, and 12 centimetres around Quai des Artistes after Friday’s rain.

The latest numbers released Friday afternoon showed Pembroke, Ont., could reach levels not seen in almost 60 years as waters are set to peak there Saturday.

The river is being driven both by the recent rains and reservoirs in the northern stretches of the watershed. Those reservoirs are full and can no longer hold back water, as they did earlier in the spring. 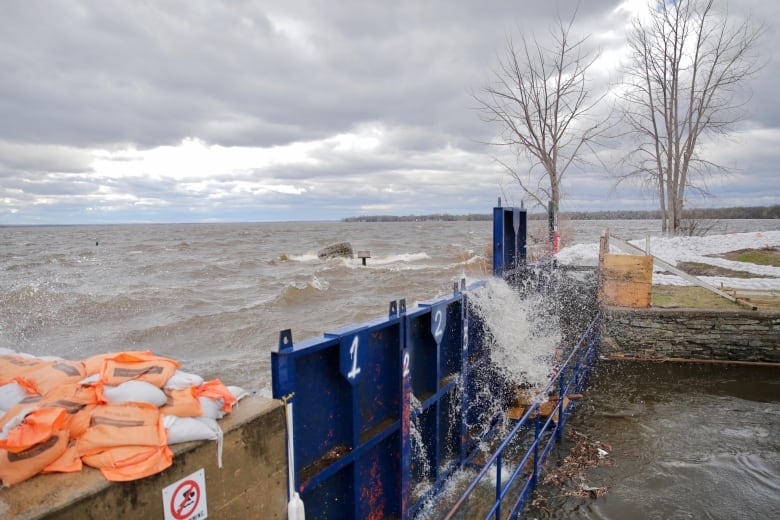 Waves push water over the berm in Ottawa’s Britannia neighbourhood on Friday. Ottawa River levels are expected to peak there Sunday. (Andrew Lee/CBC)

Ottawa remains under a state of emergency, and residents have been warned to keep their sandbag walls in place. Water levels in Britannia are set to peak Sunday at levels just below the earlier peak this year.

Farther down the river, from the Hull Marina to Hawkesbury, the levels are expected to peak on Monday.

Most of the 800 Canadian soldiers who were helping to prepare sandbag walls are no longer on duty, but 150 soldiers are helping in hard-hit areas northwest of Ottawa, including the townships of Laurentian Valley and Whitewater Region.

Lt.-Col.James Stocker said they are flexible and can bring in more support. He said most of the soldiers helping out now are reservists who take great pride in the work.

“It is very motivating, because the soldiers get to help out their fellow Canadians,” he said. “They have all volunteered to take this task.”