The parents of a 17-year-old boy killed in a random home invasion in Winnipeg want their son to be remembered as a hero and are praying justice will be served in his senseless slaying.

Imelda and Jaime Adao are trying to come to terms with the killing of Jaime Adao Jr., whom they affectionately called Jimboy, or Jimmy.

“I don’t want any other parent [to] feel this kind of unbearable pain, so please help us to find justice for my son — not only for my son, but all the children in this city,” Imelda said, speaking publicly for the first time, in an interview with CBC News Tuesday night.

“It’s the life of our kid that they have taken away, so we need an extreme justice to these people who … steal life.” 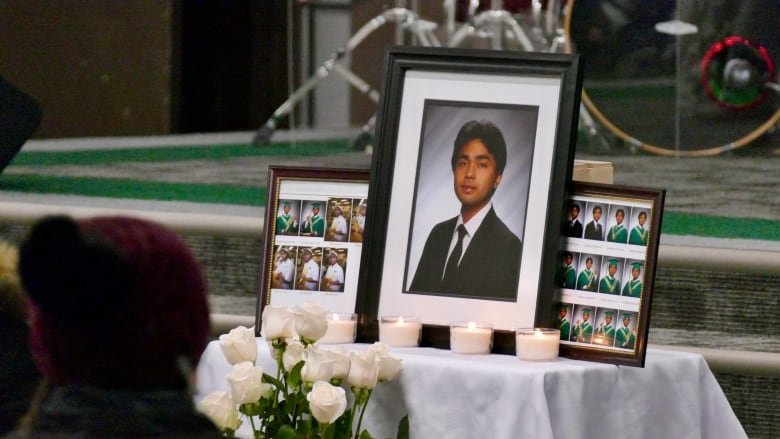 Jaime, 17, affectionately known as Jimboy, died after he was attacked by a man who broke into a home on McGee Street on Sunday. (Trevor Brine/CBC)

“My son is a hero, he saved his grandma,” added Jaime, who believes if it wasn’t for his son’s quick call to 911, the sleeping woman could have been attacked as well.

The teen was home with his grandmother when a man forced his way into their house on McGee Street, in the city’s West End​, around 9 p.m. CT Sunday.

As soon as the break-in started, Jimboy called 911. He was speaking with dispatchers when the intruder got inside and began attacking the teen with a weapon.

It was all overheard by dispatchers, who promptly sent out officers. They arrived while the attack was ongoing and shot the intruder, a 29-year-old man.

Both the man and Jimboy were rushed to hospital. The teen did not survive and the man remains in critical condition.

Imelda and Jaime said they left Jimboy with his grandma about a half hour earlier to go see a Filipino concert.

“We locked our door. We know it’s safe, that nobody can get in and steal the life of our kid,” Imelda said.

While the couple were out, they got repeated calls from a private number, which they initially ignored. 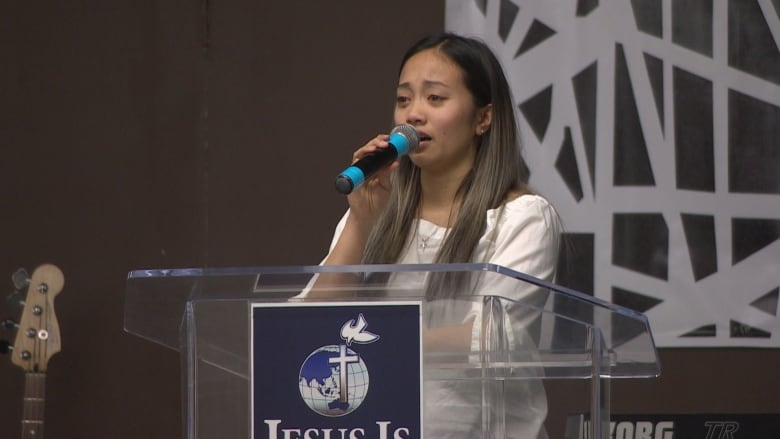 Hannah Sagaran grew up with Jaime and sang Amazing Grace at the service. She last saw him at church on Sunday morning, hours before he was killed in a violent home invasion. (Trevor Brine/CBC)

The calls didn’t stop, so they answered. A police detective was on the other end of the line, and wanted to meet with them in person.

The couple met him at their business, Jimel’s Bakery, on Sheppard Street, where their son worked for them.

“He told me that Jimmy passed away,” Jaime said.

During a heart-wrenching commemoration service at Jesus is Lord Church on Tuesday night, the couple made repeated calls for justice, and Imelda said she never thought her son would become a headline. 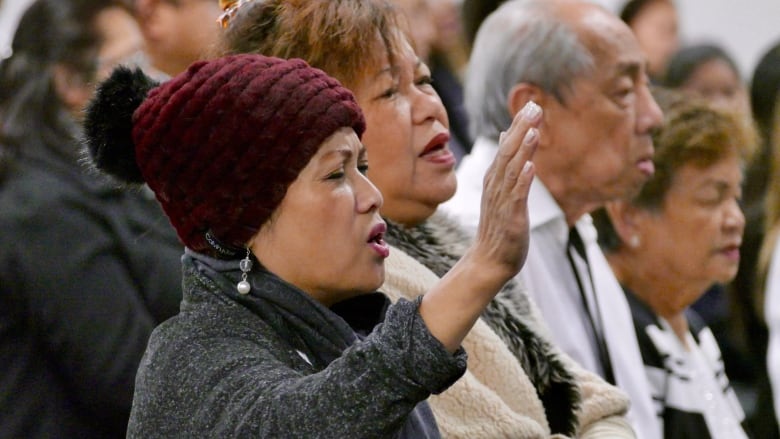 The Adao family is being supported by their church and said they will use their faith to get through the tragedy. (Trevor Brine/CBC)

Hannah Sagaran, who grew up with Jimboy, sang Amazing Grace at the service. She told the packed room, which was brought to tears several times, that he wouldn’t let her carry anything heavy at his family’s bakery where they worked together.

“He is a good kid, a good son and a good friend and upon hearing the news I didn’t know what to say,” she said afterwards to CBC, noting she last saw Jimboy at church on Sunday morning, hours before he was killed.

“I didn’t know how to react because when I last saw him I thought I still had a chance to say ‘hi’ to him.”

Sagaran, the leader of her youth church group, said she would lean on her faith to get her through this tragedy. 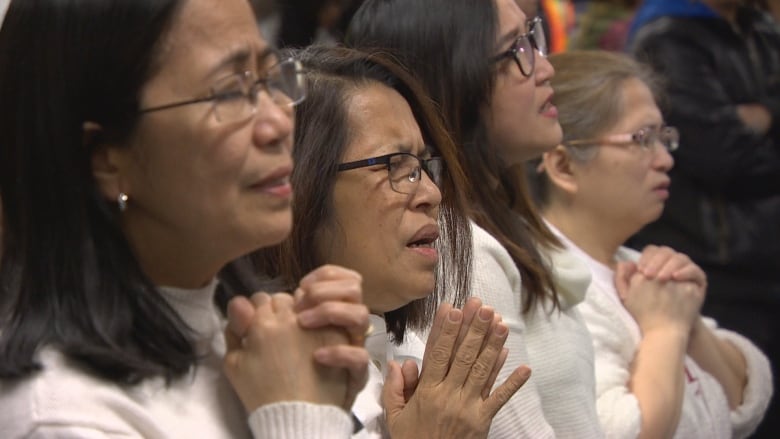 A photo of Jimboy in his graduation gown that was taken in advance of the June event was displayed on two large screens at the front of the room.

He was set to graduate from Tec Voc High School, where he was specializing in culinary arts so he could go to Red River College to pursue his dream of becoming an executive chef in a hotel he dreamed of owning one day.

“He has lots of dreams, big dreams,” Imelda said.

“That’s why me and my husband was working so hard, because we promised him, ‘son when you turn 18 we will give this [family bakery] responsibility to you.’ Because even from his childhood he used to help us.” 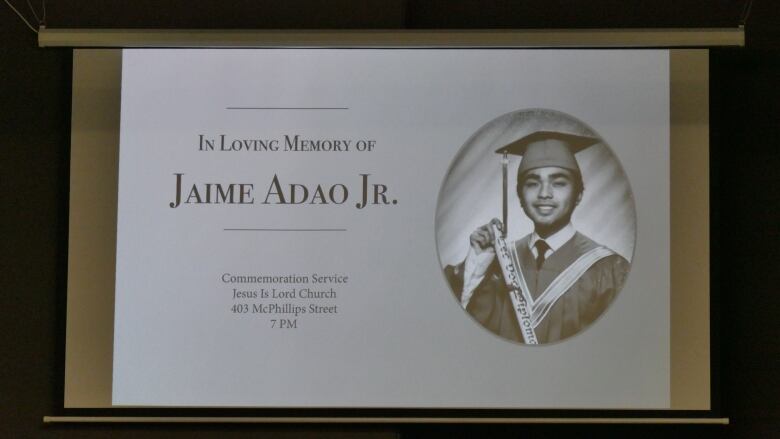 Jaime was set to graduate high school in June. He had plans to attend Red River College to pursue his dream of becoming a chef. (Trevor Brine/CBC)

St. Norbert MLA Jon Reyes told the crowd on Tuesday that the community needs to find strength while recognizing people are upset and want revenge.

Like the Adao family, many Filipinos come to Canada to work hard and serve the local community, he said.

“This shouldn’t happen to those people that work hard, who have dreams, have been successful, give back to the community and for this to happen, I can’t imagine.”