It’s been three years since the Fort McMurray wildfire, and some people are still struggling to talk about it.

An artist from the northern Alberta city wants to help change that with a new sculpture in the community garden downtown.

Ruth Perry has crafted a 230-kilogram tree, with a trunk and branches made of stainless steel and leaves made of copper that will oxidize and turn green.

She created the sculpture to provide people with an opportunity to talk about their grief after the fire.

“The tree is entitled ‘Phoenix,’ so it’s about rising from the ashes,” she said.

Perry is a support worker with the YMCA, where she noticed many people continue to have a hard time talking about the fire.

She created the sculpture to act as a catalyst for conversation and commemorate the third anniversary of the fire. 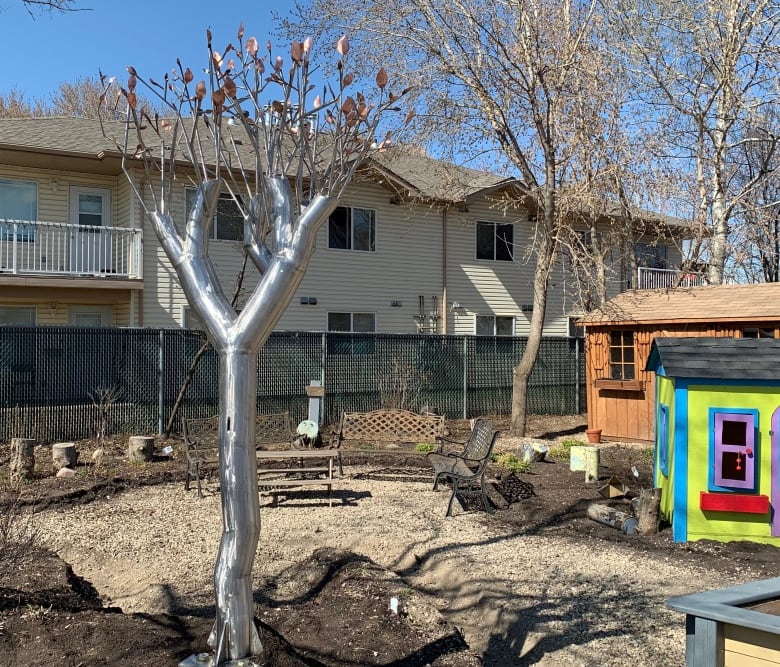 It took about six months for Fort McMurray artist Ruth Perry to plan and create this sculpture. (Jamie Malbeuf/CBC)

“The more comfortable they are about talking about their losses … the further along they usually are with their recovery or coping with those losses,” Perry said.

People aren’t just grieving the loss of their homes, she said. They’re grieving friends who didn’t return to the community and relationships that fell apart in a time of stress.

You don’t ever think that everything you worked so hard for would be lost.– Ruth Perry, artist

Perry lost her house in the fire. She said having an outlet to talk about it has helped her work through the grief.

“You don’t ever think that everything you worked so hard for would be lost,” she said. “It’s really quite a roller coaster. We thought our house might have been okay.”

Perry struggled to create art after the fire. It took about a year before she could create pieces that represented the experience.

She said sculpting the tree has been healing, but it’s a relief to be done.

There’s a hole in the tree where residents can put the keys of their homes that burned in the fire — a symbol of what was lost.

Perry will unveil the sculpture on Friday, and plans to insert her old house key during the ceremony. She bought the home from her father.

“I get emotional just looking at my old key from my house,” she said.

She plans to seal the hole a few weeks after the ceremony, and will reopen it next year.

Perry estimates that with the cost of labour and materials, it cost about $30,000 to make the tree.

The YMCA supported her labour costs, while local businesses gave her a deal on materials and installation.

The unveiling ceremony will run from 4 p.m. to 7 p.m. on Friday.