It may be a faint, fuzzy dot, but a little moon has now become an official addition to Neptune’s family.

In a paper published in Nature Astronomy today, astronomers announced their first observations of a tiny moon discovered around Neptune in 2013. This brought Neptune’s total moon count up to 14.

Until earlier this month, the moon was designated S/2004 N1 — S for satellite, 2004 for the year it was first imaged, N for Neptune and 1 for the first satellite to be discovered around the planet in 2004.

But now that astronomers have been able to work out its orbit, the International Astronomical Union has formally named it Hippocamp.

Discovering this tiny moon, which measures roughly 34 kilometres in diameter, was no easy task. It was only found when astronomer Mark Showalter detected it in images taken by the Hubble Space Telescope in 2004 and 2009. 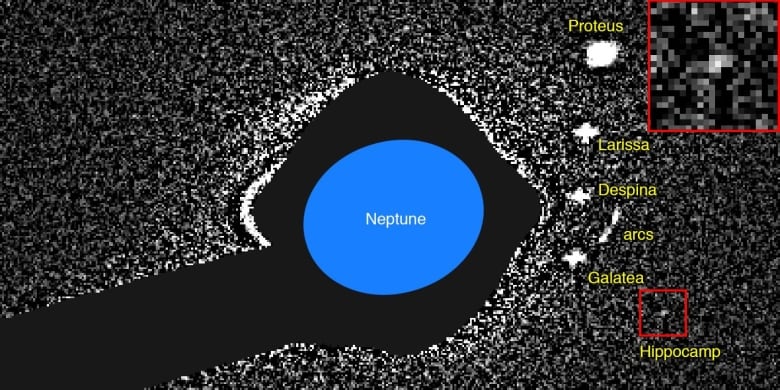 This is the earliest image of Hippocamp, obtained by HST in 2004. Hippocamp is shown inside the red box and an enlarged version is inset at upper right. (Mark R. Showalter, SETI Institute )

“I’ve actually used Hubble to discover a couple other moons in the solar system around Uranus and Pluto, but this one was the most elusive of anything I’ve worked on,” said Showalter, a senior research scientist at the SETI Institute and lead author of the study.

The reason Hippocamp is so faint is that in order to detect it in an image by a telescope orbiting Earth almost 4.5 billion km away, the exposure time would be so long that the moon would keep moving and “smear” in the image.

“So we had to come up with this special procedure where we had to say if there’s a moon in any given location in the Neptune system, and if we see it in this one location in this one image, then this is where it would appear in every other image we got,” said Showalter.

“So we had to do this geometric processing of each image, so that we stopped the moon in its tracks, and made it sit still long enough to see it.”

The discovery was kind of “dumb luck,” Showalter said. While looking for arcs that occur in Neptune’s rings, he decided to increase the view from around 70,000 km out from Neptune to 200,000 km. And there it was.

“Suddenly this dot showed up that I might have otherwise overlooked entirely, because I just wasn’t looking for a moon there,” Showalter said. “So it was actually a total surprise.”

Showalter noted it was surprising finding a moon there at all, as it’s very close to another small inner moon (relative to other moons in the solar system) named Proteus.

Showalter and his co-authors theorize that the tiny Hippocamp is actually from Proteus, which, at a diameter of roughly 400 km, is 4,000 times its volume. 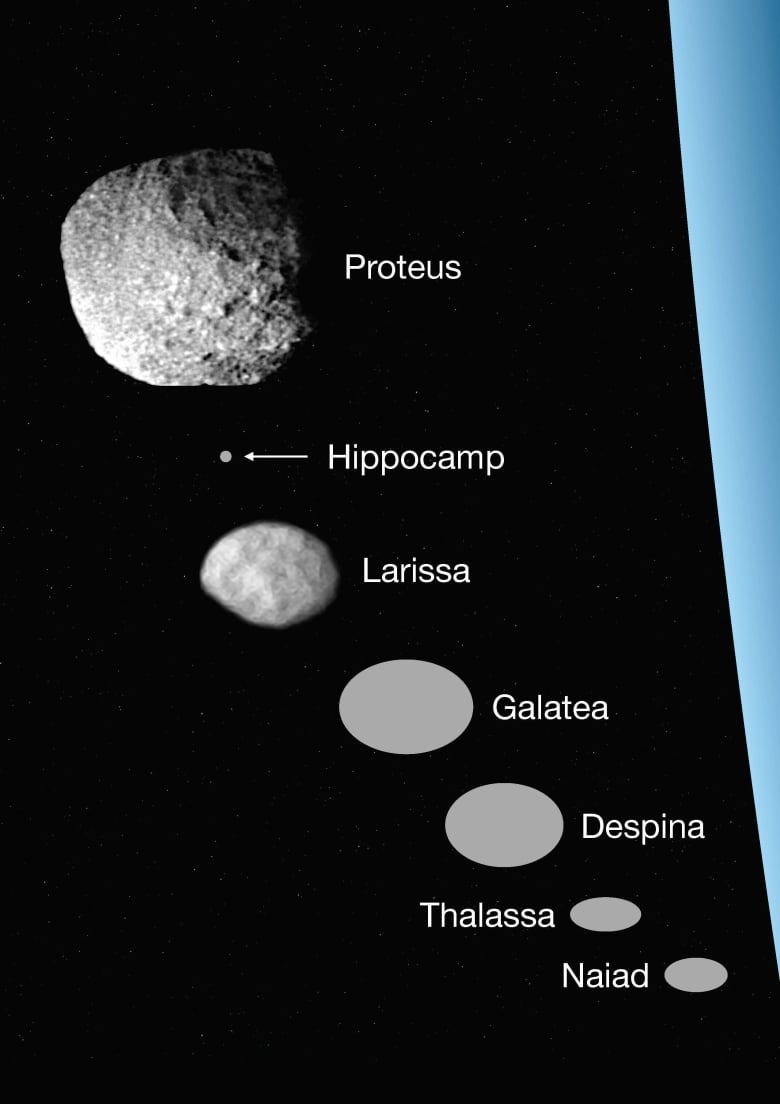 The seven inner moons of Neptune are shown at a consistent set of sizes, along with the planet’s bluish limb at right. (Mark R. Showalter, SETI Institute)

Astronomers believe that inner region of the Neptune system has been shaped by numerous impacts, and that one such impact sent out debris into the region that eventually formed Hippocamp.

What’s in a name?

Why didn’t Voyager discover it when it flew past in 1989? Showalter said that after calculating its orbit and going back to Voyager images, it appears the moon was just out of the spacecraft’s field of view.

You might be wondering where the name comes from. The International Astronomical Union is the world body that votes on solar system nomenclature. The rule for the inner moons of Neptune — named after the Roman god of the sea — is that they must come from Greek or Roman mythology associated with the oceans or Neptune and Poseidon.

Showalter, a scuba diver, said he’s quite fond of seahorses, whose scientific name is hippocampus. As well, hippocampi existed as half horse and half fish in Greek mythology. It was the perfect name, and the IAU accepted it.

While there are no missions planned for Neptune, Showalter said he’d welcome it, as so little is still known about it and Uranus. And who knows what else will be discovered.

“If we ever sent a spacecraft to Neptune, I would not be at all surprised to learn that there are additional moons of Neptune that we didn’t know about,” Showalter said. “There’s an awful lot of good science to be done at Uranus and Neptune.”