Saskatchewan Premier Scott Moe’s fraternity of anti-carbon tax premiers has added another member after Tuesday’s election in Alberta, and he says it is part of a growing trend — stand up to the federal carbon tax and you will win an election.

When asked if that will play out in the fall federal election, Moe said “that will be up to the people of Canada to make that decision.”

“I would like to congratulate the premier-elect Kenney on the campaign that he ran, not only over the course of the last month, but over the last a number of years,” Moe said.

He praised Kenney — who led a party created by the merging of Alberta’s Progressive Conservatives and the Wildrose Party — for “bringing the two parties together to represent the people of Alberta with a free-enterprise party.”

Equalization referendum a possibility in Sask.

One of campaign promises of the UCP platform was the potential to hold a referendum on equalization payments as leverage for action on pipelines and “to demand reforms to the current unfair equalization formula.”

Moe suggested the Saskatchewan government could follow Kenney’s lead with its own referendum.

“If there is an opportunity for that to actually force the federal government into an equalization conversation, I think we would be in favour of that.”

The equalization formula is “not fair,” Meili said, but he advocates for taking it to the courts instead of holding a referendum. 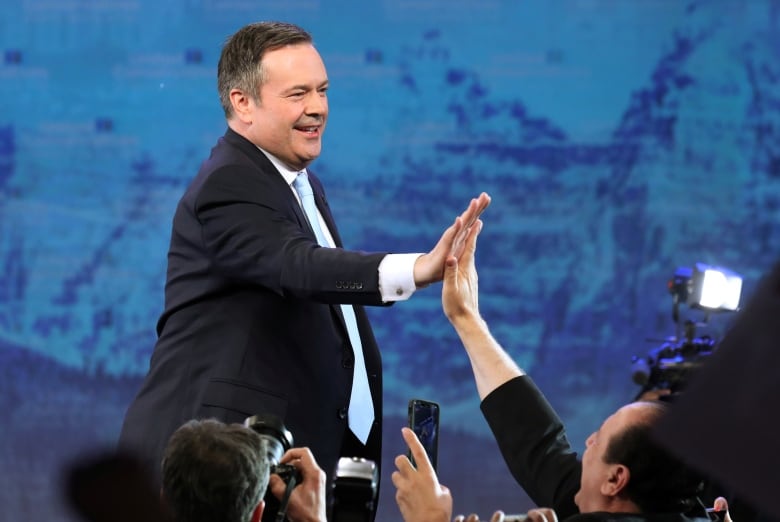 Another UCP campaign promise was to introduce “turn off the taps” legislation on its first day in office — legislation that would allow Alberta to restrict oil and gas shipments to B.C. if that province continues to stand in the way of the Trans Mountain Pipeline expansion.

The legislation was introduced by Notley’s government, but never came into force. Kenney has said he will enact it.

Saskatchewan passed a similar measure, but Moe said that has expired and would need to be reconsidered.

In his victory speech Tuesday night, Kenney promised to combat “foreign-funded special interests” such as the Tides Foundation and the David Suzuki Foundation, which he accused of leading “a campaign of economic sabotage” against Alberta.

“Your days of pushing around Albertans with impunity just ended,” Kenney said.

Kenney has suggested the UCP will take efforts to protect the province’s energy industry, including challenging the charitable status of organizations like the Suzuki Foundation and supporting an effort to sue Greenpeace for “defamation” against the oilsands.

Moe said his government has not had conversations about potential lawsuits but said it was one “I think we should have, myself and premier-elect Kenney.”

“We also need to ensure that we protect our industries from oftentimes what are foreign-funded information campaigns that may not be factual.”

Kenney pledged as one of his first acts in government to repeal the province’s carbon-pricing plan. Doing so would force the federal government to impose its carbon tax backstop, as it has already done in Saskatchewan, Manitoba, Ontario and New Brunswick.

The five provinces in opposition to the carbon tax are each governed by conservative parties.

“Five premiers representing a majority of Canadians say this is a flawed policy. This is an ineffective policy. They’ve spoken decisively at the ballot box most recently in Alberta,” Moe said. 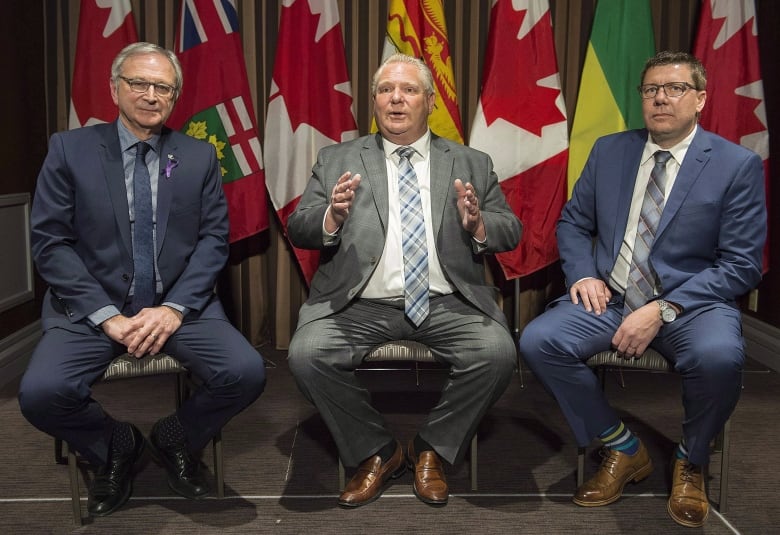 Ontario Premier Doug Ford, centre, Saskatchewan Premier Scott Moe, right, and New Brunswick Premier Blaine Higgs look on during a meeting of Canada’s premiers in Montreal. The three premiers have been closely aligned on issues like the carbon tax and removing U.S. tariffs. (The Canadian Press)

The collaboration and consistency of message has been evident in the relationship between Moe and Ontario Premier Doug Ford. New Brunswick Premier Blaine Higgs joined Moe and federal Conservative Party Leader Andrew Scheer at a pro-pipeline rally in Moosomin, Sask., in February.

Each of the five provinces is either intervening in a court challenge against the carbon tax or has launched its own.

Saskatchewan’s case was heard in Regina in February and saw Ontario and the UCP join as interveners.

Ontario’s case is being heard this week in Toronto, with Saskatchewan and New Brunswick as interveners. Manitoba has announced plans to launch its own challenge.

Kenney said if elected, he would mount a court challenge in Alberta.