Syrian President Bashar al-Assad visited Iran and met with officials there on a rare trip abroad in which he thanked the Islamic Republic for its support throughout Syria’s conflict, official news agencies in Syria and Iran said.

Assad met with the Supreme Leader Ayatollah Ali Khamenei and President Hassan Rouhani on the trip — the first time he has traveled anywhere other than Russia since the Syrian civil war erupted nearly eight years ago.

Tehran has given the Syrian government billions of dollars in aid since the conflict began and sent Iran-backed fighters to battle alongside his forces — assistance that has helped turn the tide in Assad’s favor.

Syrian state TV says Assad “thanked the Islamic Republic’s leadership and people for what they have given to Syria during the war.” Assad’s office said “both sides expressed their satisfaction with the strategic levels reached between the two countries in all fields.”

Syrian and Iranian media released photos showing Assad, in a dark suit, in an embrace with Khamenei and shaking hands with Rouhani, both of them smiling.

Assad was quoted by Syrian state TV as saying he told Khamenei that regional countries should not heed the wishes of Western powers led by the United States to “sow chaos” against Syria and Iran. 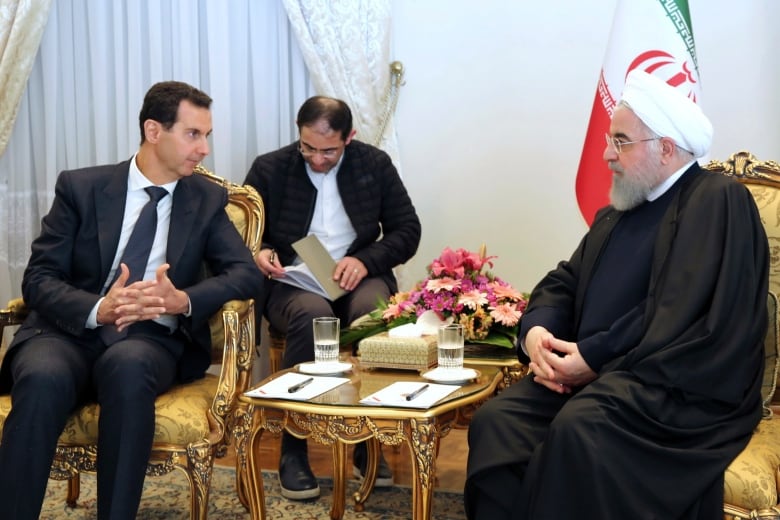 Assad was quoted by Syrian state TV as saying he told Khamenei that regional countries should not heed the wishes of Western powers led by the United States to ‘sow chaos’ against Syria and Iran. (Office of the Iranian Supreme Leader via Associated Press)

“Western escalation will not steer (Iran and Syria) away from defending their own interests,” a state television statement quoted Assad as saying.

Assad has only ventured outside his war-ravaged nation twice since the conflict began — both times to Russia. This week’s visit to meet Iranian leaders is his third since protests against his family’s decades-long rule broke out in March 2011.

The protests prompted a harsh response from Syrian security forces, which led to the emergence of an insurgency. The resulting war has killed some 450,000 people and driven millions from their homes.

The visit to Iran comes a day before a trip by Israeli Prime Minister Benjamin Netanyahu to Russia for talks expected to focus on Iran’s role in Syria. Israel has said it will not tolerate a permanent Iranian military presence in Syria, and it has carried out scores of airstrikes against Iran-linked targets there.