It’s a long way from the killing fields of Kandahar to the laneways of Lviv, Ukraine — but for Lt.-Col. Pierre Leroux, the newer conflict carries some echoes of the older one.

When Leroux arrived in Afghanistan in the fall of 2010, the Canadian army was helping to train Afghan forces to fight in the middle of a shooting war with the insurgent Taliban.

There are important differences between the two wars — for starters, Canadians were on the frontlines in Kandahar and are not in Lviv — but in both conflicts Leroux arrived on the scene at a watershed moment, just as the war was about to evolve into something different.

His tour of Afghanistan as a company commander in the 1st Battalion Royal 22e Regiment came just after an American military surge had tamed the wildly dangerous Kandahar province, giving the Canadians an opening to finally help establish some semblance of governance. 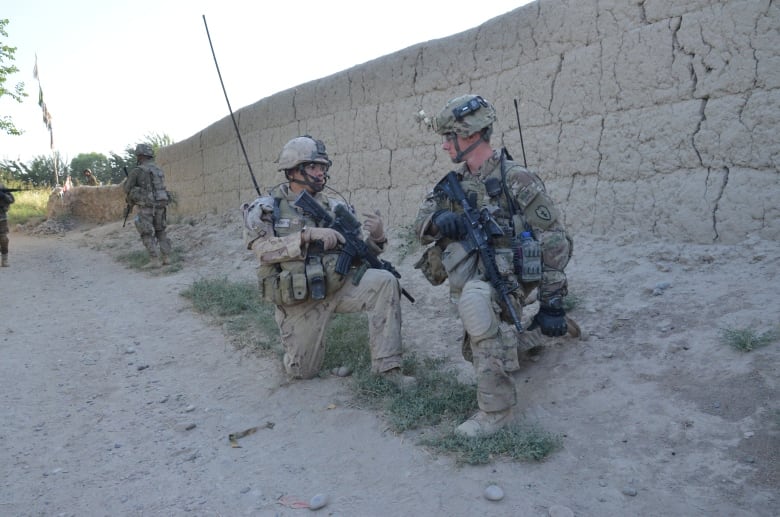 Lt.-Col. Pierre Leroux, left, speaks with an unidentified American soldier in Zangabad, Afghanistan, in June 2001. At the time, Leroux was a major leading a combat company. He is now the commander of Canada’s training mission in Ukraine. (Murray Brewster/CBC News)

Ukraine is on the cusp of a transformation of its own, with the possible election of a new president whose opaque platform has some international analysts worried that he is pro-Russian.

A runoff election in a few weeks will decide whether Volodymyr Zelensky unseats Petro Poroshenko, whose pro-Western outlook and dogged military campaign in two restive districts (known as ‘oblasts’) has worn thin with ordinary Ukrainian voters.

Leroux said there’s no shortage of work for them to do.

“There are so many things that we can improve,” Leroux told the CBC in a telephone interview from the military training centre in Yavoriv, near Lviv. “It’s pretty incredible. There’s still a lot of doors open.”

Canadian troops first deployed to help train Ukrainian army units in advanced combat skills — including the detection and defusing of roadside bombs and booby traps, which presented a major problem in the early stages of the conflict.

Leroux said the Ukrainians have advanced to the point where they can train their own bomb disposal troops. The Canadians are now helping them with what’s known as ‘sapper’ training: breaching fortifications, demolition and bridge-building under fire. They’re also providing advanced courses to train snipers.

One of Canada’s biggest contributions, however, has been in the field of advanced combat medical training.

When the Canadians arrived in September 2015, Ukrainian soldiers were only being given short, basic combat medic training by U.S. troops. In Canadian hands, that training has been expanded into a three-month course that delivers advanced life-saving skills.

A better chance of survival

It’s important knowledge, given the Ukranian army’s high attrition rate, Leroux said. Knowing the wounded have a better chance of survival has boosted the confidence levels of frontline troops.

Leroux said the politics of Ukraine is far removed from the work he and his troops are doing, but he’s convinced the work has value.

“So I see this mission can keep on going for a while,” he said.

The commander of HMCS Toronto, which is currently cruising the Black Sea off Ukraine and taking part in exercises with other NATO warships, expressed similar optimism in a ship-to-shore interview on Friday.

Commander Martin Fluet said that — unlike previous patrols, when his frigate and other allied ships faced low-flying Russian warplanes buzzing them — this latest foray into the region has been quiet.

Shadowed by the Russians

According to reports published in Moscow, two Russian warships — one of them an intelligence-gathering vessel — are shadowing the NATO task force.

Fluet confirmed those reports, but said it’s all part of the routine.

“It is a very standoff approach, where they are following from a distance,” he said. “There was nothing hostile directed towards us.”

The U.S. has proposed sending even more ships into the Black Sea and stepped-up port visits along the coast in eastern Europe — partly in response to the capture of small Ukrainian naval vessels by the Russians in the disputed Kerch Strait last November.

After a meeting with alliance foreign ministers in Washington this week, NATO Secretary General Jens Stoltenberg said he hopes allies “agree on new measures to improve our knowledge of the situation in the [Black Sea] region.”

That’s a signal that rotating naval deployments — which include Canadian ships — will also continue for some time to come.