After years locked in battle with a policing hospitality unit, the owner of an Edmonton shisha bar has won his fight to stay open.

On Tuesday, an appeal committee overturned a decision by the city’s licensing department to shut down Nyala Lounge, located northeast of downtown.

“I think the city went one step forward, we appreciate that, as the African-Canadian community, we thank the city councillors,” said owner Mulugeta Tesfay.

The committee — made up of councillors Moe Banga, Jon Dzaidak and Tony Caterina —  upheld additional conditions imposed on Nyala last summer and said a written decision would follow. Members decided the bar’s inability to operate over the past week-and-a-half, during a postponement of the hearing, would serve as sufficient penalty for breaching conditions. 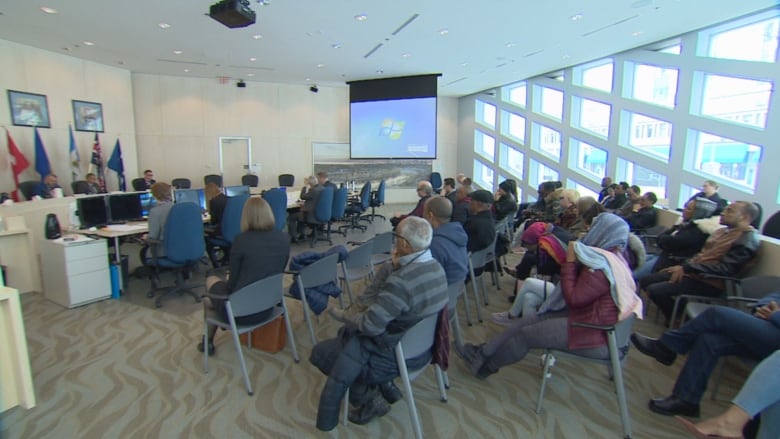 Customers, staff and neighbours attended the hearing on the future of Nyala Lounge. (Samuel Martin/CBC)

In a submission last year pushing for Nyala’s closure, the PSCT accused Nyala of breaching dozens of conditions and jeopardizing public safety.

Its arguments were the basis for the city’s Dec. 6 decision to cancel Tesfay’s business licence, which was previously cancelled in September, then overturned a day later, because the city didn’t properly notify Tesfay.

Earlier Tuesday, Tesfay again insisted Nyala is “one of the safest places in Edmonton.”

He told the committee he was there to defend his rights as an African-Canadian to run a business in Edmonton.

“It is also to fight the racism we’ve been through by the police department and the city,” said Tesfay, emphasizing that his concerns only involved a few officers.

The PSCT denies all allegations of racial profiling and harassment.

The end goal of the compliance team was to close down Mr.  Tesfay’s  business.– Tom Engel , lawyer

In his submissions, Nyala’s defence lawyer Tom Engel told the committee Tesfay, 46, a decorated war veteran, invested his life savings in Nyala Lounge after a suicide bomb blast in Afghanistan ended 20 years of service in the Canadian military.

Engel accused the inspection team of providing “self-serving summaries” without full disclosure of the evidence against Nyala, as well as a number of misrepresentations.

The team cited violent incidents Tesfay himself reported, or ones that had “nothing to do with Nyala” and continued to reference charges that had been stayed, said Engel.

Engel referenced a spreadsheet that shows of 43 tickets issued to Tesfay — worth more than $80,000 — 33 have been withdrawn, dismissed or cancelled.

Tesfay has been found guilty on six infractions for violations such as overcrowding, and about nine tickets are still active.

“The end goal of the compliance team was to close down Mr. Tesfay’s business and everything that they did furthered that goal,” Engel said.

Video provided by the owner of Edmonton bar Nyala shows instances when the police came to inspect the premises. 1:29

Simon Renouf, counsel for the PSCT, said additional police scrutiny could be explained by a “flip flop” on the part of Nyala. Renouf said last June, Tesfay agreed to an additional nine conditions to stay open, only two days after saying he couldn’t comply.

“That was obviously was a situation that the public safety compliance team had to look into,” said Renouf. “They had a duty and it’s unfortunate that there’s a perception of ethnic or racial targeting here.”

They had a duty and it’s unfortunate that there’s a perception of ethnic or racial targeting here.– Simon Renouf ,  lawyer

Renouf said Nyala repeatedly failed to meet conditions in a series of inspections.

“There was not one inspection when every condition was being complied with,” he said.

“What we’ve got is a problem of ungovernability,” said Renouf. “The bargain was made, and the bargain was not lived up to by Nyala.”

Renouf highlighted a January 2018 incident as a principal reason to close Nyala. Police charged Tesfay with obstruction of a peace officer in an incident at the lounge involving a gun that goes to court in April.

Tesfay has pleaded not guilty, but didn’t comment on allegations, as advised by his lawyer. 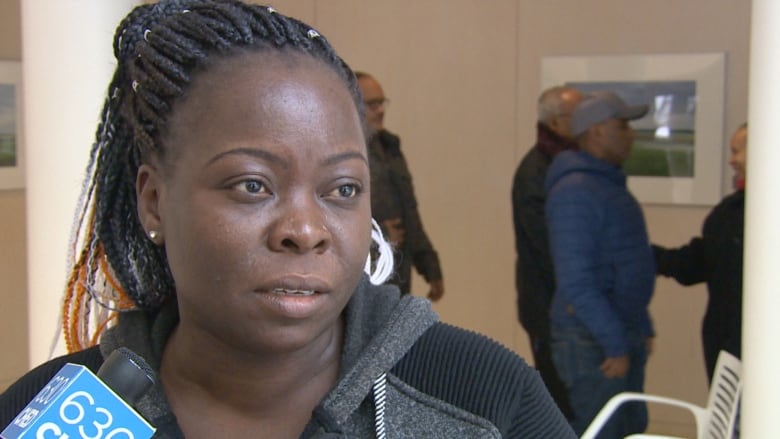 Hawa Badi says everyone at Nyala has become a family. (Samuel Martin/CBC)

Earlier in the day, customers, staff and neighbours vouched for Nyala’s safety as a community-oriented business and questioned the need for frequent inspections involving large groups of officers.

“Nyala’s home,” said regular customer Hawa Badi, who described the bar as a peaceful place to go listen to good music and smoke shisha. “At Nyala we all become family.”

Linda Landers, who works at the nearby Humpty’s restaurant, blamed issues on another nearby hookah bar that has since closed.

Customer Rashid Hersy recalled up to 16 officers visiting Nyala, including the gang unit.

“So the question came out — what’s going on here?” he asked. “I tell you this: I will never trust my life going to a risky bar.”

Hersy pointed to bars near the downtown or Whyte Avenue where “people are being killed inside,” but reopen soon after.

“Why are African businesses a target?” asked Hersy. 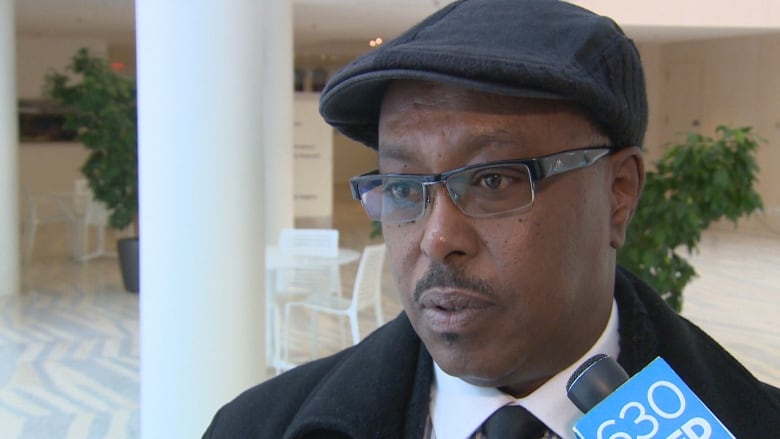 Rashid Hersy called on authorities to look into the treatment of African Canadian businesses. (Samuel Martin/CBC)

Renouf said he was not aware of any other African Canadian bar subject to PSCT investigations, apart from Papryrus Lounge, which lost its license in 2015 after two men were shot dead.

“My client completely rejects there is racial profiling or targeting,” said Renouf.

Applause broke out after the committee’s decision before supporters gathered outside where Engel told them “you made the difference,” prompting another round of applause.

Engel said he plans to discuss the “differential treatment” of African Canadian businesses with Edmonton Police Chief Dale McFee. He is asking McFee to investigate why “nothing has happened” a year-and-a-half after Tesfay’s filed his complaints under the Police Act.

Tesfay is still deciding whether to reopen but said, either way, the ruling is a victory for the rights of local African Canadian business owners being harassed by inspectors.