Tens of thousands of people in cities across Algeria called on President Abdelaziz Bouteflika to leave office on Friday in the biggest anti-government demonstrations there since the Arab Spring eight years ago.

The protests were mostly peaceful but as crowds receded by late afternoon, scuffles broke out in the capital Algiers between police and protesters near the presidential palace, witnesses said.

One person died during a stampede, an informed source said. Local media said it was a 60-year old man who had collapsed but no more details were immediately available.

Several protesters and policemen were wounded during clashes in Algiers, state television said, without giving details.

Earlier a sea of people, young and old, had thronged the streets after Friday prayers, chanting “Bye, bye Bouteflika!” and “Peaceful! Peaceful!.” Many were draped in the Algerian flag and carried placards and banners.

Large scale demonstrations — rarely seen in Algeria — against plans for Bouteflika to seek a fifth term in power in April elections began a week ago but Friday saw the biggest turnout yet.

The 81-year-old suffered a stroke in 2013 and has been seen in public only a few times since. His re-election bid stoked resentment among Algerians who believe he is not fit to lead.

This is a celebration, not a protest. We are celebrating Algeria’s rebirth.— Ali  Selmi

“Look at the Algerian youth, all they are demanding is a valid president who can talk to the people,” said Hamdane Salim, a 45-year-old public sector worker. “Twenty years are enough,” said Khadidja, a woman accompanied by her husband and children.

Among the crowd was Djamila Bouhired, 83, a heroine of the 1954-1962 independence war against France, who told reporters: “I’m happy to be here.”

‘Our battle will continue’

After hours of marching, many protesters began walking home but some stayed on, dancing and singing.

“This is a celebration, not a protest. We are celebrating Algeria’s rebirth,” said Ali Selmi. “It’s like the end of a football match and Algeria won 3-0.”

Mohammed Saadi, another young man, said: “Our battle will continue until we win.”

Later Reuters TV footage showed police in riot gear and protesters facing off on a street near the presidential palace swathed in tear gas. Witnesses said clashes resulted in injuries on both sides. 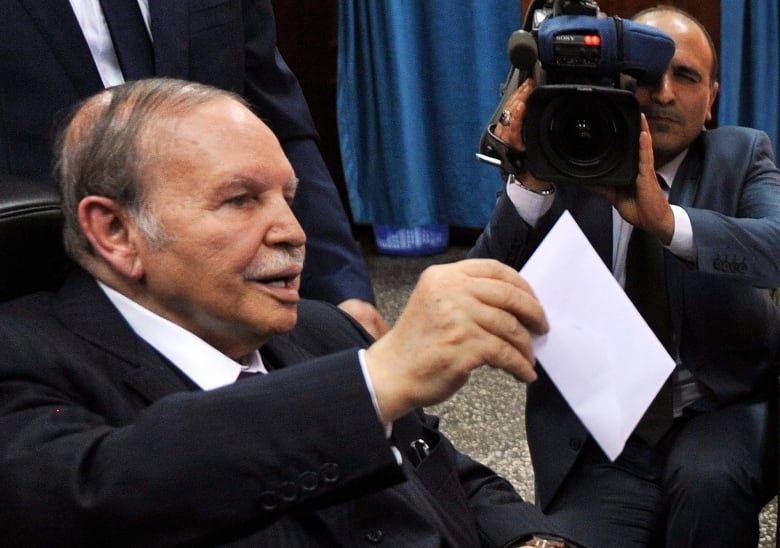 Bouteflika suffered a stroke in 2013 and has been seen in public only a few times since. His re-election bid stoked resentment among Algerians who believe he is not fit to lead. (Sidali Djarboub/Associated Press)

Bouteflika, who will turn 82 on Saturday, has not directly addressed the protests. The authorities said he would travel to Geneva for unspecified medical checks, although there was no official confirmation he had travelled.

Local television stations reported the protests but there was no live coverage. State television and the official news agency APS provided rare coverage of the march, which they said had had been largely peaceful.

Many Algerians for years avoided politics in public, fearing trouble from the omnipresent security services or disillusioned as the country has been run by the same group of veterans since the independence war.

There appeared to be few such inhibitions on Friday.

“People want to overthrow the regime,” some chanted, using a slogan from the 2011 Arab Spring turmoil which toppled leaders in Egypt, Libya and Tunisia.

Bouteflika has ruled since 1999 and stamped out a decade-long Islamist insurgency early in his rule. Many Algerians have long tolerated a political system with little space for dissent as a price for peace and stability. But the new protest waves appears to have broken the long taboo on public discussion of politics.

According to Bouteflika’s opponents, there is no evidence he is fit to lead the country, and it is being ruled in his name by advisers. Authorities say he retains a firm grip on public affairs despite the rarity of his appearances.

A weak and divided opposition faces high hurdles in mounting an electoral challenge. Since the long-ruling FLN party again picked Bouteflika as its presidential candidate, several parties, trade unions and business groups have endorsed him.

Lower oil prices in recent years have damaged Algeria’s economy, rekindling discontent and making it more difficult to buy off dissent, as in 2011, when authorities expanded a welfare state.