Britain’s Brexit secretary says the government is not offering a “blank cheque” to the Opposition after Prime Minister Theresa May offered to meet with the Labour Party leader in hopes of ending the impasse over the U.K.’s departure from the European Union.

Steve Barclay told the BBC on Wednesday that some Labour proposals, such as a customs union with the EU, would be “very difficult” for the government to accept but both sides need to sit down and work out an agreement to avoid a damaging no-deal Brexit.

Barclay said: “We’re not setting pre-conditions, but nor is it a blank cheque.”

But he added that the “remorseless logic” of Parliament’s failure to back the prime minister’s withdrawal agreement with the EU is that Britain must move toward a softer form of Brexit. 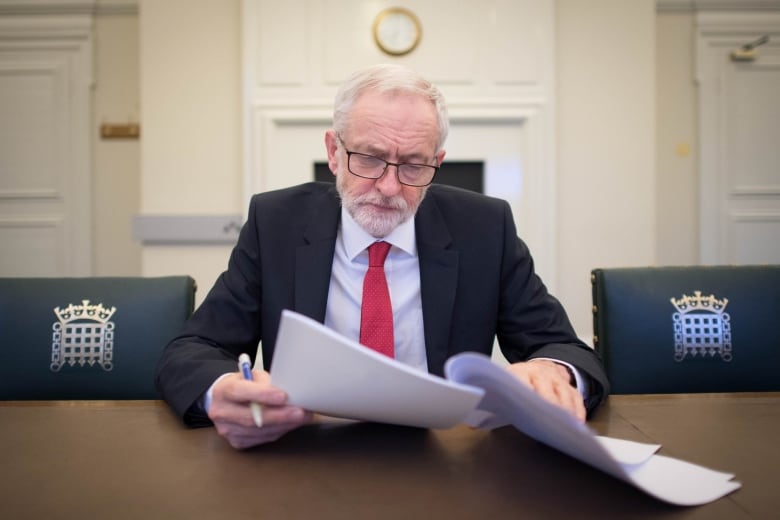 British Opposition Labour Party leader Jeremy Corbyn has said he would be ‘very happy’ to sit down with May, though he said, ‘so far she hasn’t shown much sign of compromise.’ (Stefan Rousseau/Reuters)

European Union lawmakers, meanwhile, backed a plan saying British citizens should be allowed to travel in Europe visa-free after Brexit — but only if the U.K. grants the same right to EU citizens.

The move permits stays of up to 90 days in any 180-day period, but does not grant the right to work. The full parliament is likely to endorse the decision Thursday.

EU officials say it is “very likely” that Britain will depart without a deal, bringing potentially devastating political and economic consequences.

The Europeans are publicly stepping up their no-deal planning, increasing pressure on the U.K. Parliament to find a compromise.