The U.S. will move a Patriot missile battery into the Middle East to counter threats from Iran, the Pentagon said Friday, reflecting ongoing concerns that Tehran may be planning to attack U.S. forces or interests in the region.

The U.S. Defence Department released a statement about the move but provided no details. An official said the decision came after intelligence showed that the Iranians have loaded military equipment and missiles onto small boats controlled by Iran’s Revolutionary Guard. The official was not authorized to discuss the information publicly and spoke on condition of anonymity.

The U.S. Maritime Administration said on Friday that Iran could target U.S. commercial ships including oil tankers, as a senior Iranian cleric said a U.S. navy fleet could be “destroyed with one missile.”

In the latest tense exchange between Tehran and Washington, Iran’s hardline Revolutionary Guards separately said Iran would not negotiate with the United States, a stance that seemed partly aimed at discouraging Iranian President Hassan Rouhani and his moderate allies from taking up a U.S. offer of talks.

On Thursday, U.S. President Donald Trump urged Iran’s leaders to talk with him about giving up their nuclear program and said he could not rule out a military confrontation.

Trump made the offer as he increased economic and military pressure on Iran, moving to cut off all Iranian oil exports this month while beefing up the U.S. navy and air force presence in the Gulf. 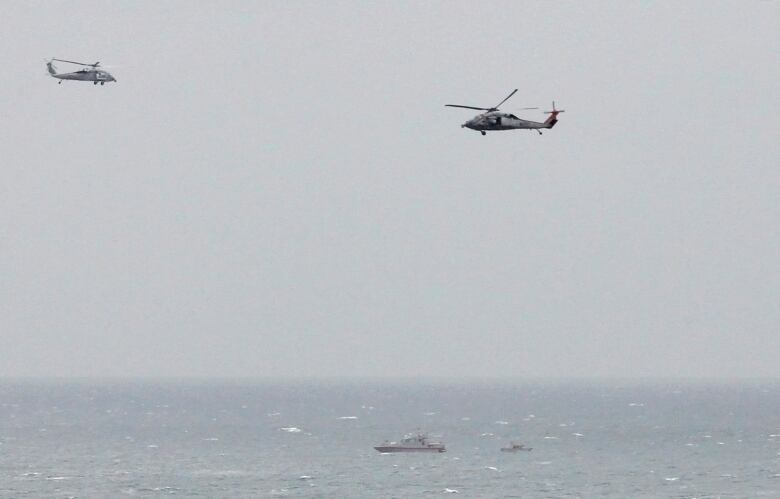 An Iranian Revolutionary Guard boat is seen near the U.S. aircraft carrier USS George H. W. Bush in the Strait of Hormuz as U.S. navy helicopters hover nearby in March 2017. (Hamad I Mohammed/Reuters)

The aircraft carrier Abraham Lincoln, deployed as a warning to Iran, passed through Egypt’s Suez Canal on Thursday and B-52 bombers have also arrived at a U.S. base in Qatar, U.S. Central Command said.

Iran has dismissed both moves as “psychological warfare” designed to intimidate it.

In an advisory posted on Thursday, the U.S. Maritime Administration (MARAD) said that since early May there had been an increased possibility of Iran or its regional proxies taking action against U.S. and partner interests.

These included, MARAD said, oil production infrastructure, after Tehran threatened to close the vital Strait of Hormuz chokepoint through which about a fifth of oil consumed globally passes.

“Iran or its proxies could respond by targeting commercial vessels, including oil tankers, or U.S. military vessels in the Red Sea, Bab-el-Mandeb Strait, or the Persian Gulf,” MARAD said.

Millions of barrels of oil pass daily through the various bottlenecks from Middle East oil producers to global markets.

U.S.-Iranian tensions have risen since Trump withdrew a year ago from a 2015 nuclear deal with Iran and major powers and began ratcheting up sanctions to throttle Tehran’s economy.

Vice-Admiral Jim Malloy, commander of the U.S. navy’s Bahrain-based Fifth Fleet, told Reuters on Thursday its forces were on a heightened state of readiness, although the U.S. military was not seeking or preparing for war with Iran.

MARAD said U.S.-flagged ships were encouraged to contact the Fifth Fleet at least two days before sailing through the Strait of Hormuz. The fleet’s job is to protect commercial shipping in the area.

Washington further tightened sanctions on Iran this month — eliminating waivers that had allowed some countries to buy its oil — with a goal of reducing Tehran’s crude exports to zero.

Iran responded by relaxing some curbs on its nuclear program concerning material stockpiles but continues to comply with commitments to restrict its uranium enrichment activity.

Rhetoric has grown heated on both sides.

The semi-official ISNA news agency quoted hardliner Ayatollah Tabatabai-Nejad in the city of Isfahan as saying: “Their billion[-dollar] fleet can be destroyed with one missile.

“If they attempt any move, they will … [face] dozens of missiles because at that time [government] officials won’t be in charge to act cautiously, but instead things will be in the hands of our beloved leader [Ayatollah Ali Khamenei],” he said.

‘Sanctions have no effect!’

Separately, Yadollah Javani, the elite Revolutionary Guards’ deputy head for political affairs, said: “No talks will be held with the Americans, and the Americans will not dare take military action against us.”

“Our nation … sees America as unreliable,” he said, according to the semi-official Tasnim news agency, echoing a stance Iran has taken since the U.S. withdrawal from the 2015 deal under which Iran curbed its nuclear program in return for relief from economic sanctions. 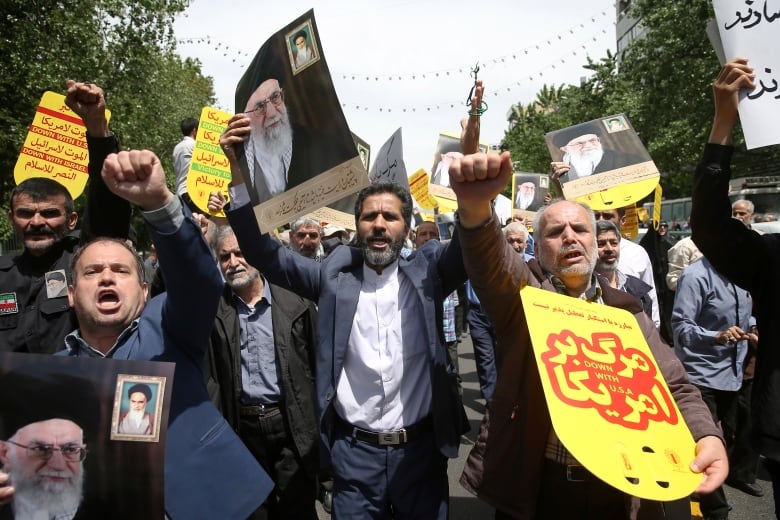 Protesters chant slogans against the United States and Israel during a state-sanctioned rally after Friday prayers in Tehran. (Ebrahim Noroozi/Associated Press)

Thousands of Iranians took part in state-sponsored marches on Friday to support the government’s decision to reduce limits on its nuclear program. Iran has threatened to go further if other parties to the deal — Britain, China, France, Germany and Russia — fail to shield it from U.S. sanctions.

State TV showed protesters marching after Friday prayers in Tehran and said similar marches had been held across Iran.

“America should know, sanctions have no effect!” chanted the protesters.