The outgoing president of Ukraine is telling supporters he plans to try to win the job back in a future election.

President Petro Poroshenko, first elected in 2014, was routed by comedian Volodymyr Zelenskiy in a runoff election on Sunday. A near-final count gave Poroshenko 24 per cent of the vote, compared to Zelenskiy’s 73 per cent.

“Our main victories are ahead,” Poroshenko told several thousand supporters who rallied outside presidential headquarters on Monday, and said he would see to it that his successor has “strong opposition” in parliament.

His party and its allies control the current parliament. The next parliamentary election is set for October, but observers say Zelenskiy might try to disband the national legislature and call an early election.

Poroshenko promised to reclaim the presidency and told his supporters: “Together we will go to parliamentary elections.” 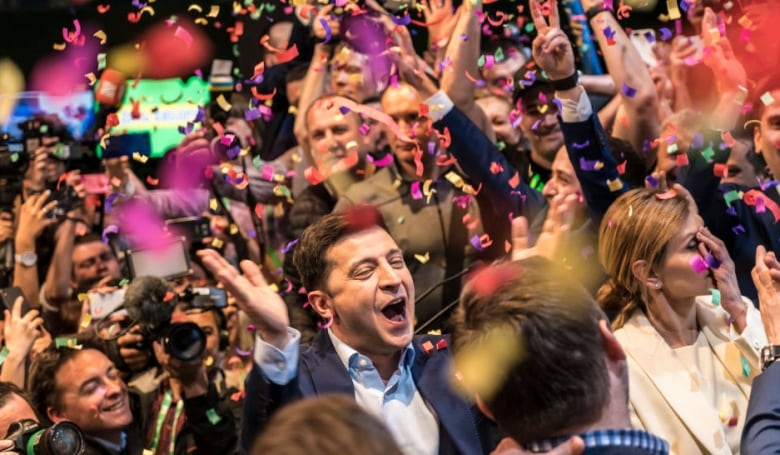 Volodymyr Zelenskiy, centre, celebrates his victory in Ukraine’s presidential race at his election-day headquarters after the polls closed on Sunday in Kyiv. (Brendan Hoffman/Getty Images)

The Central Election Commission announced the landslide win for Zelenskiy on Monday with 99 per cent of the ballots counted.

Unlike in most of the elections in Ukraine’s post-Soviet history, Zelenskiy won both in Ukraine’s west and east, areas that have been traditionally polarized.

One of the campaign slogans of Zelenkiy, 41, was to unify Ukraine, which has been torn by bitter debates over its identity as well as the separatist conflict in the east that is fuelled by neighbouring Russia.

The popular television comedian played the sitcom character of a teacher thrust into the presidency but has no previous political experience.

Zelenskiy had drawn support from Ukrainians fed up with the country’s languishing economy and those who saw billionaire chocolate magnate Poroshenko, 53, as not making enough headway in improving the standard of living.

In a downpour of confetti, Zelenskiy accepted his election victory Sunday on the floor of a Kyiv nightclub, rented as campaign headquarters.

Asked what he planned to do first in the role as the country’s real president, he mentioned the fate of 24 Ukrainian sailors, captured five months ago by Russia near the disputed Crimean peninsula.

“I will do everything so that our guys return home,” he said.

That call is really up to Russian President Vladimir Putin, but some at his victory party were hoping a new leader may help unfreeze the relationship.

The Kremlin on Monday said it’s too early for Putin, in power nearly 20 years, to congratulate Zelenskiy for the election win.

Kremlin spokesperson DmitryPeskov told reporters that Moscow “respects the choice of the Ukrainian people” but said congratulations were premature.

Peskov said it’s also too soon to talk about the Russian-speaking Zelenskiy’s victory creating the possibility of improved ties between Russia and Ukraine.

He said Moscow will wait for concrete steps from the new Ukrainian leader before making judgments.

Michael Bociurkiw, a Canadian global-affairs analyst who was in Kyiv to watch election results, said the expectations Zelenski faces are enormous.

“It’s one thing for him to win, it’s another to pass legislation through a very divided parliament,” he said.

Still, the fact that a post-Soviet state held such a competitive election, and that the transition of power appears to be going smoothly, is significant in itself.

Election observers from the Organization for Security and Cooperation in Europe have praised Ukraine for conducting a presidential election that sets the stage for a “democratic and orderly transfer of power.”