The UN mission to Libya (UNSMIL) called on Sunday for a truce for two hours in southern Tripoli, where forces loyal to the country’s rival governments have been clashing, a statement said.

UNSMIL urged a truce to transport the wounded to safety, it said, without giving casualty figures.

Eastern Libyan forces reportedly carried out an airstrike on the southern part of Tripoli on Sunday, escalating an operation to take the capital.

The Libyan National Army (LNA) force of Gen. Khalifa Haftar, which backs a parallel administration in the east, last week launched an advance on Tripoli in the west, the home to the internationally recognized government. 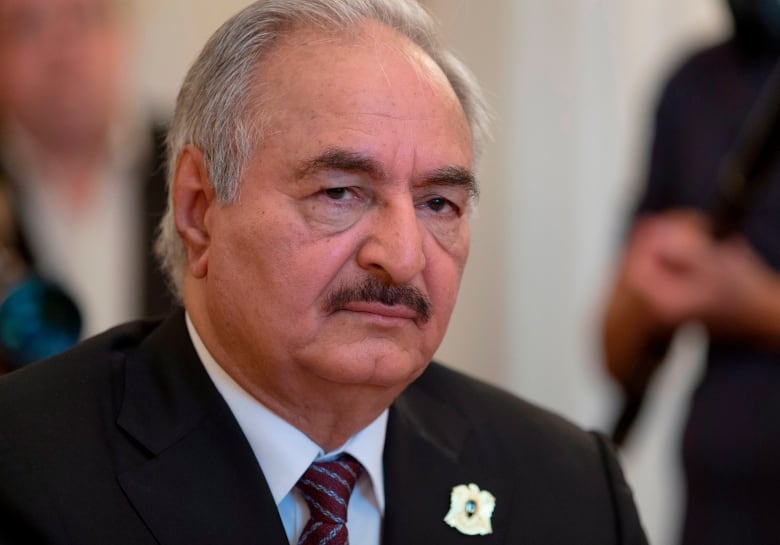 Libyan militia commander Gen. Khalifa Haftar is seen on Aug. 14, 2018, attending a meeting with Russian Foreign Minister Sergei Lavrov in Moscow. Forces loyal to Haftar, leader of the self-styled Libyan National Army that’s based in the country’s east, have been advancing on Tripoli over the past week. (Ivan Sekretarev/Associated Press)

The offensive intensifies a power struggle that has fractured the oil and gas producer since the 2011 overthrow of Moammar Gadhafi.

The LNA claims to have reached the southern outskirts and taken its former international airport, though military officials in Tripoli deny this. The LNA is supported by Egypt, the United Arab Emirates, France and Russia. It answers to the authorities based in eastern Libya, who are at odds with the UN-backed government. 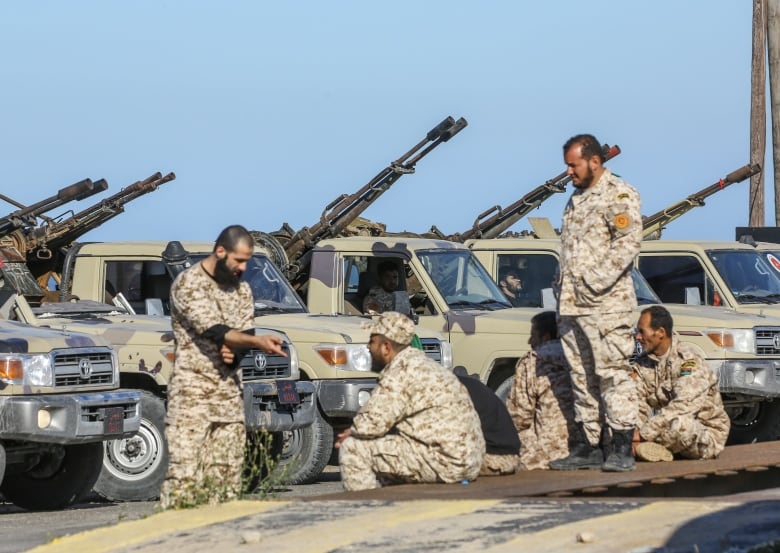 Forces loyal to Libya’s UN-backed unity government arrive in Tajura, a coastal suburb of the capital Tripoli, on Saturday. Pro-government militias from the nearby base of Misrata have been moving to defend Tripoli. (Mahmud Turkia/AFP/Getty Images)

Rival militias, affiliated with a UN-backed government in Tripoli, said they had also carried out airstrikes, slowing Haftar’s advance.

At least 23 people, including civilians, have been killed on both sides since Thursday.

In another sign of the situation worsening on the ground, a small contingent of U.S. forces supporting the U.S. Africa Command have left Libya for security reasons, a U.S. statement said.

“The security realities on the ground in Libya are growing increasingly complex and unpredictable,” said Marine Corps Gen. Thomas Waldhauser, the head of U.S. Africa Command. “Even with an adjustment of the force, we will continue to remain agile in support of existing U.S. strategy.”

He did not provide details on the number of U.S. troops that have been withdrawn or on how many remain inside the country.

Forces allied to the Tripoli government, meanwhile, announced an operation called “Volcano of Anger” to defend the capital, a spokesperson said, without giving details.