French firefighters are working to extinguish a blaze in a Paris restaurant seen as a powerful symbol of France’s elite that was torched amid yellow vest protest violence.

The flames pouring out of the posh eatery Fouquet’s on the Champs-Elysées marked one of the most powerful images on a day of unusual unrest in the French capital.

The restaurant was vandalized Saturday morning and later set ablaze. Several luxury boutiques along the elegant avenue were also ransacked, and kiosks set on fire.

Fouquet’s is popular among celebrities and powerbrokers.

Critics see the place as an offensive example of bourgeois decadence that is inaccessible to most French people, who are struggling to pay their bills.

It’s also associated with former conservative president Nicolas Sarkozy, who celebrated his 2007 election victory in Fouquet’s — drawing criticism for his choice of such a flashy locale. 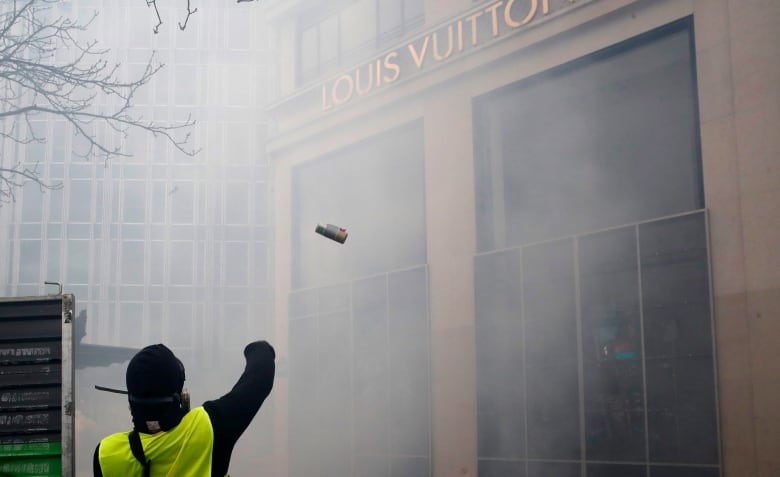 A protester throws an object at the Louis Vuitton luxury shop on Champs-Elysées avenue on Saturday. (Christophe Ena/Associated Press)

‘Macron has given us no big solutions’

Macron had led the debate over the past eight weeks in response to protesters’ concerns about sinking living standards, stagnant wages and high unemployment.

Yellow vest protesters say they turned out in increased numbers to show Macron their disappointment after a two-month national debate ended Friday.

Frank Leblanc, 62, from Nantes, said: “It was hot wind. It was useless and it didn’t achieve anything. We’re here to show Macron that empty words are not enough.” 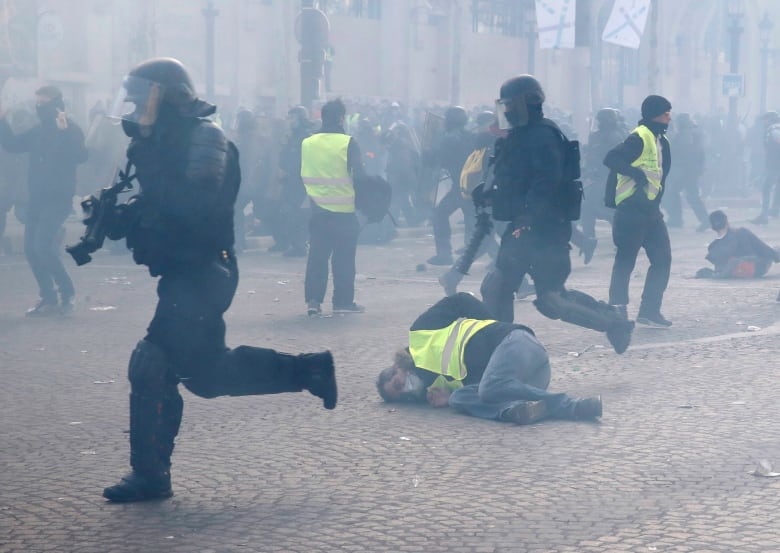 Francine Sevigny, from Lyon, said: “It’s bigger today because we’re marking the end of the big debate. All of the yellow vests in France were called to Paris today. … Macron has given us no big solutions in the big debate.”

Marie, a mother of two from Seine-et-Marne who wouldn’t give her surname, said: “I’m glad there are the thugs, because without them our movement wouldn’t get any attention. We need the violence so we can be heard.”

Saturday’s protests saw more than 100 people arrested amid rioting in the capital.