U.S. Vice-President Mike Pence told the United Nations Security Council Wednesday that the Trump administration is determined to restore democracy to Venezuela, preferably through diplomatic and economic pressure, but that “all options are on the table” — and Russia and others need to step aside.

Venezuela’s UN Ambassador Samuel Moncada said the country is threatened with war by the Trump administration, “and the ground is being laid for an invasion.” He told the council: “We must stop this war of Donald Trump.”

The United States called an emergency meeting of the UN’s most powerful body, which is deeply divided over Venezuela, to focus on the worsening humanitarian situation in Venezuela. But as with previous meetings, this one was dominated by U.S. efforts to oust President Nicolas Maduro and install National Assembly speaker Juan Guaido as the country’s leader.

Pence urged the United Nations to recognize Guaido and revoke Moncada’s credentials as the Maduro government representative. He said the United States would be circulating a resolution that would do this and also stand with the Venezuelan people “as they rise up … against intimidation and violence,” and for freedom. 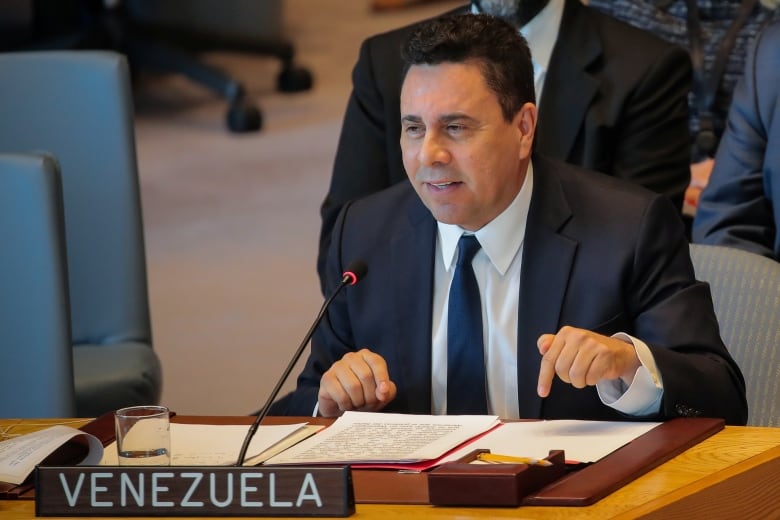 Venezuelan Ambassador to the United Nations Samuel Moncada said ground is being laid ‘for an invasion’ by the U.S. (Brendan McDermid/Reuters)

Looking at Moncada, who was also seated at the horseshoe-shaped Security Council table, Pence said: “With all due respect Mr. Ambassador, you shouldn’t be here.” He then added: “You should return to Venezuela and tell Nicolas Maduro that his time is up. It’s time for him to go.”

Pence left immediately after he spoke and didn’t hear Moncada say later: “My legitimacy depends on the legitimacy of my government as recognized by the United Nations. It is not dependent on the declarations of … the vice-president of the United States.”

The United States would need strong support in the 193-member General Assembly to change Venezuela’s credentials from the Maduro government to Guaido, and with only 54 countries now supporting Guaido as Venezuela’s interim president, it faces an uphill struggle. 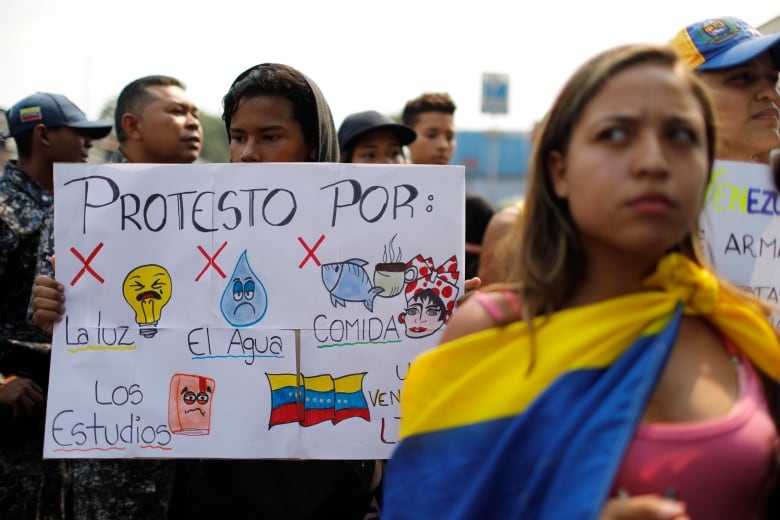 A Venezuelan holds a poster with a message that reads in Spanish: ‘Protesting because; No electricity, No water, No food,’ during a demonstration against President Nicolás Maduro in Caracas Wednesday. (Ariana Cubillos/Associated Press)

Russia’s UN Ambassador Vassily Nebenzia, whose country strongly supports Maduro, called the council meeting just “another episode of a tragedy with several acts in the attempt to change regime in Venezuela.”

The U.S. “has artificially provoked a crisis in this country in order to overthrow a legitimately elected leader and replace him with their own pawn,” he said.

Nebenzia said there are many examples of the U.S. overthrowing Latin American leaders and he asked Venezuela’s neighbours, who support Guaido: “Don’t you understand that Venezuela is merely a bargaining chip in the geopolitical and geostrategic struggle for influence in the region and the world?”

“We call on the United States to recognize that the Venezuelan people and other people have the right to determine their future,” the Russian ambassador said.

Borrowing Trump’s campaign slogan “Make America Great Again,” Nebenzia said: “If you want to make America great again, and we’re all sincerely interested in seeing that, stop interfering in the affairs of other states.”

“You will only gain respect from that, You don’t like when others interfere in your affairs. No one likes that,” he said.

Pence said Trump has made clear that Russia needs to get out of Venezuela, stressing that Russian aircraft landing in the country and bringing in security or advisory personnel “is just unacceptable.”

Pressed on whether “all options are on the table” meant that military intervention was a closer possibility, Pence said, “We have no timetable for the restoration of freedom.”