Stanley Cesaire manages to mug for the camera, with a smile full of chipped teeth, despite the fact he’s recovering in hospital with two bullet wounds in his lower legs, after Haitian police shot him during protests last week in Port-au-Prince.

“You see this?” the 21-year-old part-time mechanic says, gesturing to his legs, “The president sent the police to come shoot young people.”

Cesaire says he was at a protest “fighting for our rights” when police cracked down and opened fire. His message, like that of so many others in Port-au-Prince, is clearly directed at President Jovenel Moïse.

“We were standing up for our rights. And now look at me,” says Cesaire, “If the president wanted to, he could put work out there for us. That way young people could have jobs. That way you wouldn’t have a lot of frustrated youth like us.” 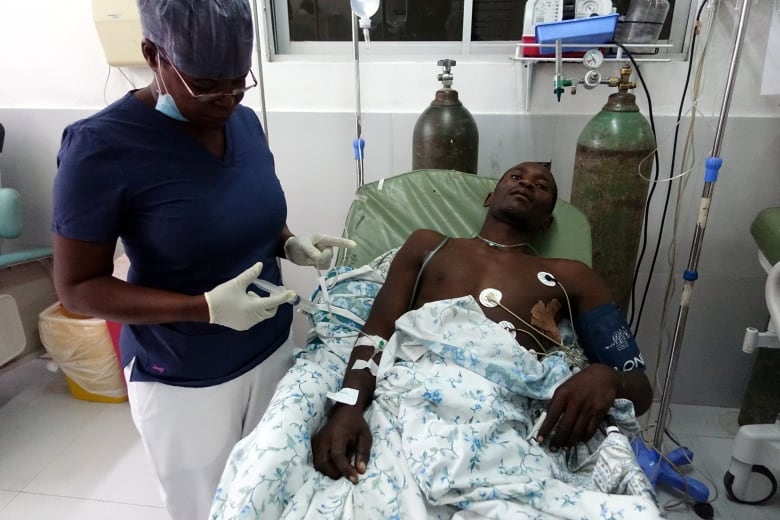 Stanley Cesaire rests in Bernard Mevs Hospital in Port-au-Prince after police shot him twice in the legs during protests last week. ‘The president sent the police to come shoot young people,’ he says. (Sylvia Thomson/CBC)

Since Feb. 7, protests have erupted across Haiti over billions of dollars in allegedly misappropriated government dollars and a miserable devaluation of the Haitian currency, the gourde.

More than 10 gunshot victims from those protests were treated at the Bernard Mevs Hospital. 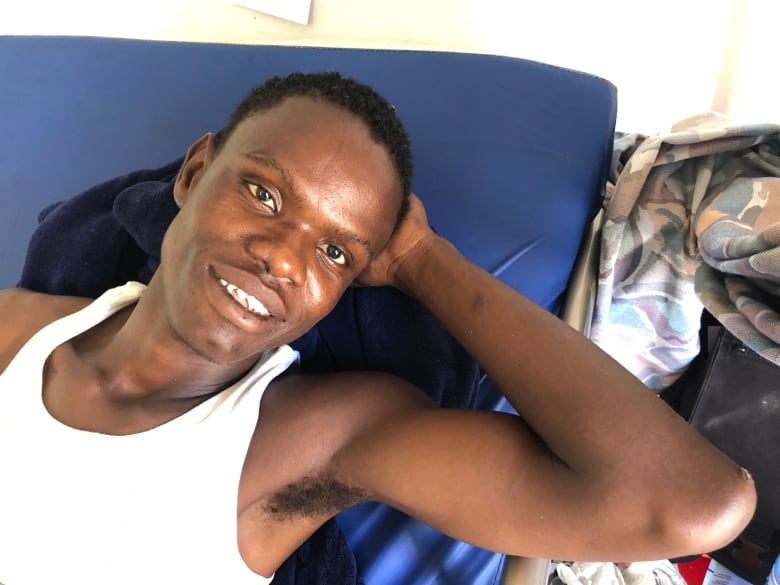 “They call me whenever there is a situation,” says Alexa Brierre, the 29-year-old hospital administrator. She says the victims were bystanders, participants, gangsters, even police.

“We refocused our entire emergency room to treat gunshot victims,” she says.

The hospital is dangerously low in supplies of oxygen, blood, anaesthesia and other medicines. 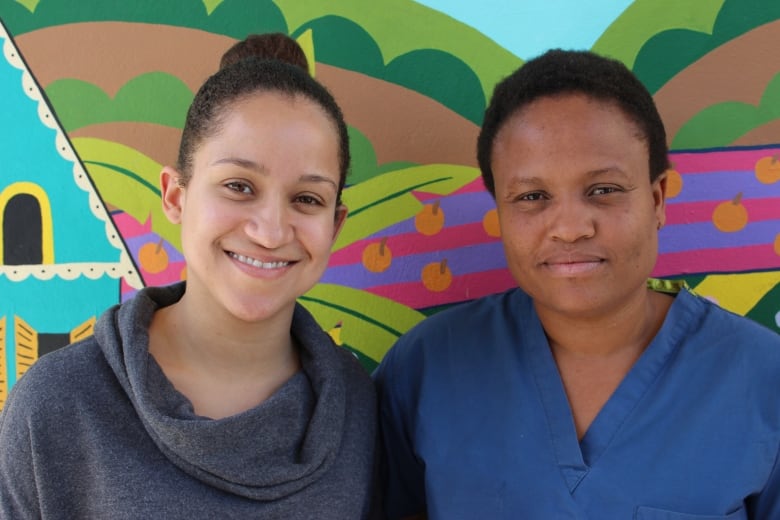 Dambreville says that even though Monday was quiet, the battle isn’t over.

Emergency medical technician Roc Wickelson says the relative calm outside the hospital on Monday doesn’t mean it will stay that way, because there are a lot of problems in the country. 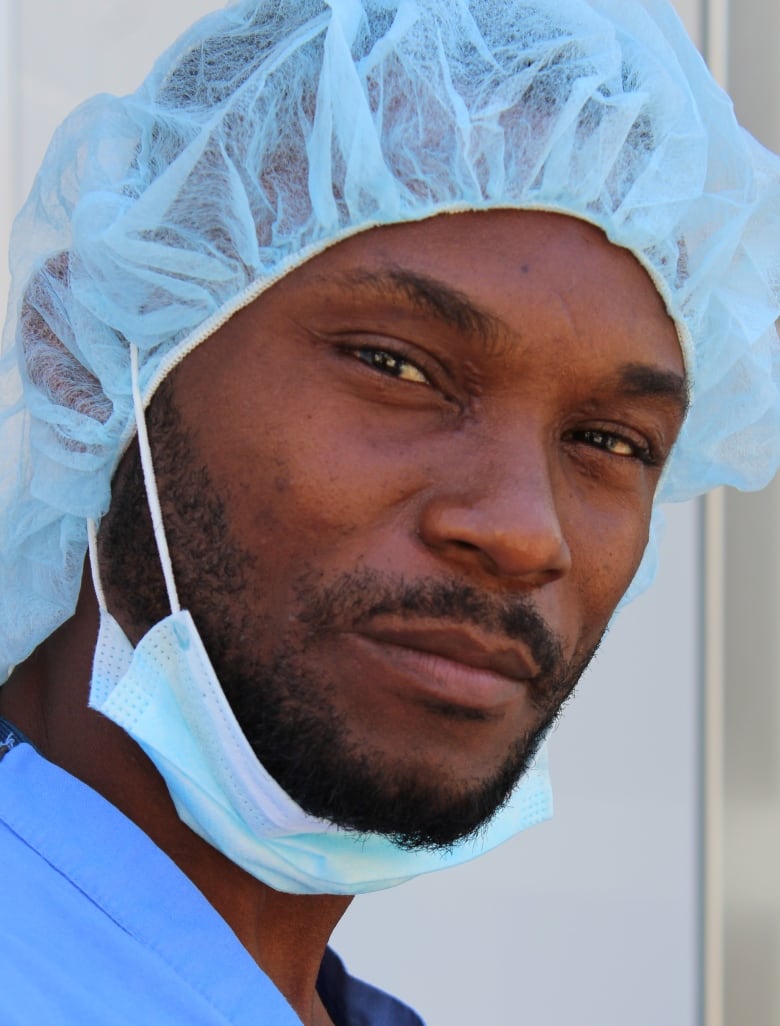 Roc Wickelson, an emergency medical technician, says he has never known a Haitian president that the people really want. ‘One year they vote him in. The next, they want him to leave.’ (Sylvia Thomson/CBC)

“We don’t know what will happen in three hours from now,” says Wickelson. “People can’t eat, they can’t feed their families. The poverty and misery is much worse compared to the last years.”

The gourde is running around 86 to $1 U.S. It’s worth around half of what it was worth in 2010, after the major earthquake, and salaries have not kept up.

A group of Canadian medical volunteers with Team Broken Earth was working at Bernard Mevs Hospital last week and gave some much needed relief to Haitian staff, who were sometimes unable to even reach the hospital because of the protests and roadblocks.

“I was so grateful they were here at this time,” says Dr. Rivette Monaly, “They slept at the hospital.”

For Haitians like Cesaire, though, more of the fix needs to come from within.

“Things are expensive, in this country. Food is getting more and more expensive,” he says, ” Why are they mistreating us like this? We are Haitians living in a dog-eat-dog world.” 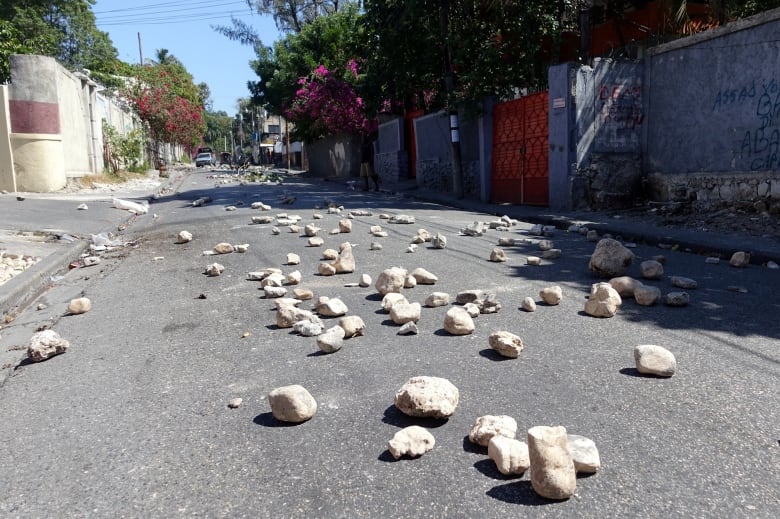